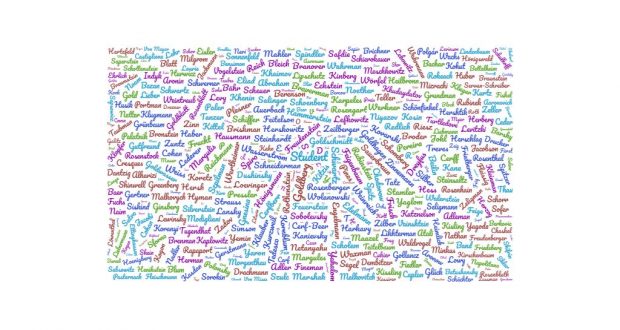 Last names serve to identify an individual with greater specificity. There may be many men named Yosef ben Ya’akov in the marketplace but Yosef ben Ya’akov Schwartz is much less common. Should we use last names in Jewish ritual and particularly in Jewish legal documents like a kesubah and get?

Initially, last names were utilized largely by nobility. Often, the last names changed each generation but over time they became more constant. We know that “Ibn Shlomo” means the son of Shlomo and probably originated with someone whose father was named Shlomo. But at some point, a family decided to continue the last name into future generations. For example, The Ri Migash’s full name is Rav Yosef ben Meir Ibn Migash (12th cen., Spain). Apparently his family was called “Ibn Migash” after an ancestor and the last name continued even with someone whose father was named Meir. Similar examples continue throughout the ages.[1]We see other famous father-son pairs with the same “Ibn” last name, such as the Ibn Tibbon translators (12th-13th cens., Provence) and Rav Ya’akov Ibn Chaviv (16th cen., Greece; editor of Ein … Continue reading

As administrative states grew, particularly in the 18th and 19th centuries, governments began requiring that all people adopt last names to enable record keeping. Should this change be reflected in halakhah, as well? The long history of last names creates a history of halakhic discussion, the development of which ultimately impacts contemporary practice.

II. All the Names

The Mishnah and Gemara (Gittin 34b) discuss Rabban Gamliel’s first century enactment to include all names in a get. Sometimes a person is called by his middle name in his hometown and by his first name in his adult home, or by different nicknames by different people. To avoid confusion, Rabban Gamliel enacted that you write a person’s primary name in the locale where the get is given and add other names that are used. Secular names add another layer of complexity. Over time, this developed into versions of roughly: “Reuven who is called Ronald and any other name or nickname he has, the son of Shimon who is called Samuel and is nicknamed Sammy and any other name or nickname he has.” Now that last names are standard, should we also include them?

The Gemara (Gittin 36a) says that the Sages enacted for the betterment of the world (tikkun ha-olam) that witnesses specify their name. This enables people to find the witnesses and validate the get if any questions arise. The Tur (Even Ha-Ezer 130) says that this means witnesses should specify their and their father’s names. Should witnesses also include their last names, so people can locate them?

What if two people have the same name and the same father’s name, and no distinguishable nickname? There are two easy ways to differentiate the people. Either go up another generation and add a grandfather’s name or include a last name. The former requires investigation to clarify the grandfather’s exact name and any possible nicknames. Adding a last name is easier, if it is allowed.

In the 15th century, we find a number of publications called Seder Ha-Get which detail the process of Jewish divorce. Perhaps the most important was written by Rav Ya’akov Margolis, a student of Rav Ya’akov Moellin (Maharil, 15th cen., Germany). Rav Margolis’ Seder Ha-Get is frequently quoted by Rav Moshe Isserles (Rema, 16th cen., Poland) in his glosses to Shulchan Arukh. Other important similar publications include that of another student of Maharil, Rav Ya’akov Weil (15th cen., Germany; Responsa Mahari Weil, no. 190), and that of Rav Yehudah Mintz (16th cen., Italy; appended to Responsa Mahari Mintz).

Rav Yehudah Mintz (Seder Ha-Get, par. 45) says that he saw gittin arranged by Maharil that do not list different nicknames beyond what the man is normally called. Those documents do not include a last name either. However, Rav Mintz adds, if the town has two men with the same name and you do not want to include a grandfather’s name then you can include a nickname (chinukh or chanikhah) of the last name. He adds that Mahari Weil agrees, although he must have a tradition to that because I do not see it in Mahari Weil’s Seder Ha-Get.

In contrast, Rav Ya’akov Margolis (Seder Ha-Get, par. 99) quotes Rav Menachem Bacharach (16th cen., Germany) as saying that you should refrain from mentioning a last name in a get. Instead, in a case of ambiguous names you should go up a generation to the grandfather’s name. Significantly, Rema rules like this in his gloss to Shulchan Arukh (Even Ha-Ezer 129:16). Rema’s student, Rav Binyamin Slonik (Masas Binyamin, Comments to Even Ha-Ezer 120:3), quotes both opinions. We seem to have a debate over whether you may include last names in a get, on each side of the debate is one of Maharil’s students, Rav Ya’akov Margolis and Mahari Weil, and with Rema saying that the custom follows the strict view of Rav Margolis. The question is why not include the last name in a get and whether this applies to other legal documents, as well.

Rema (Darkei Moshe, Even Ha-Ezer 129:19) says that the problem is that a kinuy nickname refers to an individual while a chanikhah nickname refers to a family. If you call someone with just the last name (Shmuel ben Ya’akov Goldman) it might seem like the last name is part of the individual’s name or his father’s name. If you call it a kinuy, then you imply that it is his own nickname and not the family’s. Rav Mordechai Yaffe (17th cen., Poland; Levush, Even Ha-Ezer 129:17) adds that using a family name does not identify the individual but rather the entire family. Therefore, it is an invalid kinuy.

Rav Chizkiyah Medini (19th cen., Israel; Sedei Chemed, Asifas Dinim, Ma’arekhes Get, ch. 7 nos. 12-14) quotes a debate whether using a last name invalidates a get completely. Some argue that the ambiguity caused by a family name renders the entire document invalid. Others allow it after the fact.

However, Rav Elazar Fleckles (19th cen., Austria; Teshuvah Me-Ahavah 1:52 par. 7) describes a divorce he oversaw in 1805. The divorcing husband had the same name as someone else in town, including father and grandfather (Yosef ben Shimon ben Ya’akov). Rather than going up to a fourth generation, Rav Fleckles, together with the Prague beis din, decided to use the man’s last name in the get.[2]See also Rav Moshe Sofer, Responsa Chasam Sofer, Even Ha-Ezer, vol. 2 no. 32.

Rav Shalom Mordechai Schwadron (Maharsham, 19th cen., Ukraine; Responsa Maharsham, vol. 1 no. 83) dealt with someone who was almost exclusively called by his last name. Maharsham concludes that the get should include his first name and say that he is called (de-miskeri) by his last name. He quotes Rema’s objection but counters that times have changed and now everyone calls people by their last names alone (e.g. Mr. Schwartz).

Rav Moshe Feinstein (Iggeros Moshe, Even Ha-Ezer, vol. 1 no. 178) suggests that using language that explicitly identifies a last name as belonging to the family resolves all problems. For example, if you write Chaim ben Ya’akov be-chinukh Goldman you are identifying Goldman as a family name. Even better is the term le-mishpachas which explicitly says that the term is a family name. Rav Feinstein says that this would be appropriate even for a get according to all opinions. However, we should not do it for a get because of the severity of a mistake and the difficulty in correctly spelling last names. For any other document, we would be allowed to use a last name and doing so would be an enhanced of the document.[3]See also Iggeros Moshe, Orach Chaim, vol. 4 no. 40 par. 20. For many of the sources in this article, I was assisted by R. Shlomo Zalman Braun and R. Chaim Elazar Braun, She’arim Metzuyanim … Continue reading

Rav Joseph B. Soloveitchik used last names in kesubos (see Rav Aharon Ziegler, Halakhic Positions of Rabbi Joseph B. Soloveitchik, vol. 5, p. 66), as do many of his students. Rav Hanan Balk told me the following story that Rav Manfred Fulda told him. Rav Fulda was once officiating at a wedding and Rav Moshe Feinstein entered the room. Rav Fulda asked Rav Feinstein to officiate but Rav Feinstein declined and instructed Rav Fulda to proceed with filling in the kesubah. Rav Fulda asked Rav Feinstein how to spell the last names and Rav Feinstein quickly interrupted him and asked what he was doing. Rav Fulda looked at him with utter dismay and replied that he was following what Rav Moshe said to do in Iggeros Moshe and using last names! Rav Moshe responded: “It is true that I ruled that way, but my view has not been accepted and the minhag is not to use last names.” I am told that Rav David Feinstein also did not use last names in kesubos.

Interestingly, Rav Mordechai Willig (starting at 12:07) does not use last names due to complicated circumstances such as an adopted child and a woman marrying a second time — which last name should be used? A highly emotional celebration such as a wedding is not the best time to raise these issues.

It seems that times have changed and the ruling from 500 years ago does not necessarily still apply. Even if it does, we have found a solution to the problem it poses. But despite that, many are hesitant to change a common practice both due to conservatism and to additional complications that arise in modern settings. Some are open to change in less important documents but all agree that we cannot risk changing the practice of name conventions in gittin.