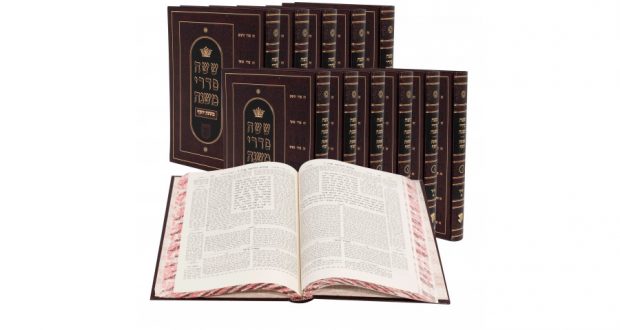 The Shisha Sidrei Mishnah: A Map of Jewish Life

We study Mishnayot, the basis of Torah Sh’bal Peh, the Oral Law, nearly every day.  Currently, in the daily Mishnah cycle, we are learning Seder Zeraim, the first of the Shisha Sidrei Mishnah (Six Orders of Mishnah). Before certain Yamim Tovim we review Mishnayot from Seder Moed.  Likewise, when we seek to keep fresh our knowledge of the issues of marriage and divorce, we learn Mishnayot in Seder Nashim.

Of course, we know that Masechet Shabbat is in Seder Moed, Kiddushin is in Seder Nashim, Baba Kama in Nezikin, and Zevachim in Kodshim.  Have we ever stopped however, and asked if the names of the Shisha Sidrei Mishnah themselves carry deeper meaning beyond the halachic, legal themes and topics covered in them?  That is, has it occurred to us that the very names of these Sedarim of the Mishnah  – Zeraim (“seeds”), Moed (“festivals”), Nashim (“women”), Nezikin (“damages”), Taharot (“purities”), and Kodshim (“holy things”) – might speak to a profound understanding beyond the specifics of their content?

More than a century ago, Zalman Schachter, seeking a deeper understanding of the Shisha Sidrei Mishnah names, approached my grandfather, the great gaon, Rav Bezalel Ze’ev Shafran ZT’L, and challenged him with this very question.

My grandfather responded (Siman 45, Shu’t R’baz – Choshen Mishpat) that, indeed, the names of the Six Sedarim of the Mishnah do represent much more than a mere “table of contents” of Jewish Law.

They are in the deepest sense a “road map” of every Jew’s life.

“These six names are indicative of man’s life”, he wrote.  Life begins with seeds being sown (Zeraim).   Then, from the time of one’s birth until the age of eighteen, he knows years of moed, of joy and freedom.  During that time, he “…carries no real burden of responsibility”, only growth and development, fun and games.  At the age of eighteen, he is introduced to the stage of nashim, marriage, and with it, the responsibilities of the home, of earning a living, of sharing with others.  This stage is coupled with the onus of nezikin, financial responsibilities and liabilities, burdens and commitments. During these productive years, he is driven by the need to provide along with the anxiety not to be mazik, not to be a source of damages to others.

From the age of sixty to seventy as one approaches life’s later stages, his inner need to sanctify and purify is motivated by a sense of kodshim; to create holiness within and around his life so that when the ultimate tahara is performed, taharot surrounds his very being.

Consistent with every Jew’s goal to culminate his earthly existence and achievements with purity, my grandfather concludes his response with, “Ashrei l’mi sh’yatzea nishmato b’taharat ha’kodesh – Praised be the one whose soul departs with sanctified purity.”

Even now, I can recall myself as a youngster being deeply moved by my grandfather’s insight into life’s divisions and to this day can feel anew the inspiration it gave me as I gazed forward to a lifetime of Jewish learning and experience.

Many years later when my dear son Natan became bar mitzvah, I shared with him my grandfather’s Shisha Sidrei Mishnah vort,  which I elaborated on by explaining that our grandfather saw a Jew’s life divided into six spheres, and these spheres could be viewed and understood through the prism of the names of the Shisha Sidrei Mishnah.

I paraphrased my grandfather’s divisions, suggesting that life is experienced in three central phases.  From birth until the age of bar or bat mitzvah age, one is in the chol (weekday) stage, the “easy rider” stage.  During this time, one is still a child and childhood is synonymous with the innocence, naivete, freedom, amusement, and pleasure that comes with being free of real responsibilities.

It is only at bar or bat mitzvah, when one assumes the ohl ha’mitzvot, that there is a shift in priorities and goals.  The teen asks questions, demands answers, sets goals, plans careers, dreams of successes all the while wrestling with issues of self-worth and fitting in; in short, he or she searches for purpose and meaning.  These years are the “Shabbat” of life; a time of seeking, but always with a focus on the sich, on the self.  It is during these years that values must be clarified, mentors found, and firm guidelines of human thought and behavior established.

It is during this time of life when we focus on the other.

Shabbat focuses of the individual’s spiritual majesty and rejuvenated Divine soul.  Yom Tov seeks and is enlarged by a communal spirit and bonding.  The Zohar comments on the Talmudic principle that the fundamental difference between Shabbat and Yom tov is ochel nefesh bilvad, by teaching that eating alone on Yom Tov incurs a punishment, but celebrating Shabbat without sharing with others, no punishment is due.  Yom Tov demands yease lachem – for you and the needy.  In other words, Yom Tov is a shared communal, collective celebration. On Yom Tov we share with society at large.

My grandfather’s deep insight into the significance of the Shisha Sidrei Mishnah’s names is not the entirety of his wisdom on the subject.  In Siman 14 of Shu’t R’Baz – (Choshen Mishpat) he writes that many have asked him to explain something baffling pertaining to the observation of the Ba’al HaTurim (on Parashat Vayeshev 37:3, wherein the Torah reports that Yisrael loved Yosef more than all of his sons since he was a ben “ZeKuNIM”).  The Ba’al HaTurim writes that ZeKuNIM is an acronym for Zeraim, Kodshim, Nashim, Yeshuot (another name for Nezikin), and Moed – five of the six Sidrei Mishnah.

Why only five?  What happened to the sixth seder, Taharot?  Why would the Ba’al HaTurim omit Taharot?

Aniti v’amarti – “I responded and answered” my grandfather writes, that it is known that Yaakov loved Yosef more than any of his sons because he found in him the savvy of elders (taam zkenim) [as the Onkelos translates ben zekunim to be, “a wise child”].

Yaakov discovered that Yosef had attained stature and understanding with regard to the orders of Zeraim, Kodshim, Nashim, Yeshuot, and Moed.  Once Yosef made all this known to Yaakov, he took it as a trusted sign (ot ne’eman) that Yosef’s heart saw much wisdom and knowledge, and it is this wisdom and knowledge that points us to Seder Taharot (Shabbat 34a) – and ‘immersed his foot in oil’ is the wellsprings of wisdom, in holiness and purity.  That is, Yaakov did not need to invoke Taharot, because Yosef’s mastery of the other five orders implied that he had achieved purity as well.

Perhaps we can say, my grandfather continues, that the Ba’al HaTurim inferred Yosef’s mastery of Taharot from his name, as it can be shown that sixteen (Yud-Vav) times (peamim) sixty (Samech) is an acronym for YOSeF, which adds up to 960 (60 x 16) and 960 is the number of logim that constitute a kosher mikvah, thus alluding to the order of Taharot.  Therefore, Taharot is not mentioned by the Baal HaTurim, because Yosef’s own name attests clearly to how elevated Yosef had become, a sanctity of the first degree, through his abstinence, which necessarily leads to purity (Taharot).  In other words, Yosef himself became synonymous with Taharot and therefore, it need not be mentioned.

Yosef’s example demonstrates that we can become what we learn! 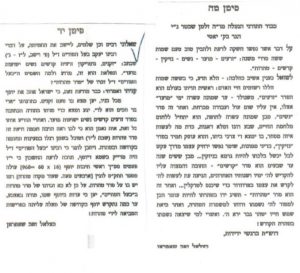