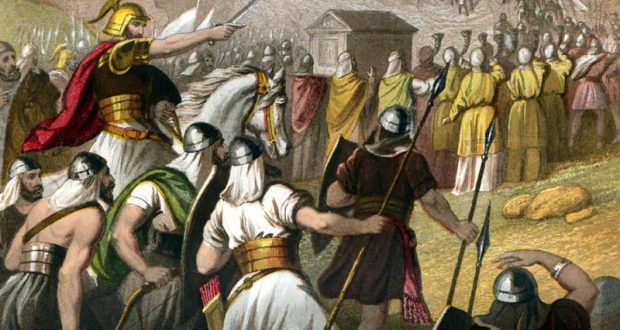 Eruvin, Archeology and the Conquest of Canaan

I. The Conquest of Canaan

Many historians with a critical eye toward the Bible point out that the archeological record seems to contradict the biblical account of Yehoshua’s conquest of the land. While the archeological record shows that many areas of the land contain artifacts showing evidence of a Jewish presence at that, many places lack that evidence — implying that the Jews did not, in fact, conquer the entire land in the time of Yehoshua. For someone unfamiliar with the Bible and traditional commentaries, this might seem like a significant historical challenge to the accuracy of the Bible. I would like explore a response from a different literature.

R. Amnon Bazak (cont., Israel; To This Very Day: Fundamental Questions in Bible Study, pp. 269, 271), before responding to it, summarizes the problem as follows:

The conquest of the Land of Israel is described at length in the book of Joshua, and the conventional view, based on a superficial reading of the text, is that both the process of conquest and the subsequent settlement of the tribes of Israel in the land were completed in a short time. Various archeological findings cast grave doubts on this view, however… From the evidence we may conclude that the Canaanite centers were not attacked all at the same time, but rather over a long period…

I disagree with R. Bazak on one point here. I don’t think even a superficial reading allows for the conclusion that the entire land was conquered in the seven years of Yehoshua’s wars. The Bible clearly says, “And Yehoshua was old and advanced in age, and God said to him, ‘You are old and advanced in age, yet there remains much of the land to still be possessed’” (Josh. 13:1). The Torah even says about the nations in the land, “Little by little I will drive them out before you, until you grow numerous and inherit the land” (Ex. 23:30). However, since I can be accused of apologetic reading of the text to answer this and similar challenges, I will set that aside and instead respond from a great halakhic debate of the early nineteenth century, in which both participants presumably were unaware of biblical criticism and certainly were unaware of the late twentieth century historical challenges to the Bible.

Around the year 1814, Rav Ya’akov of Karlin questioned the validity of the modern eruv. He was a leading Lithuanian rabbi, the grandson of Rav Baruch of Shklov, one of the leading disciples of the Vilna Gaon, and himself among the leading students of Rav Chaim Volozhiner. Rav Ya’akov of Karlin sent a long letter detailing his questions and criticisms to Rav Ephraim Zalman Margoliyos of Brody, the leading Galician scholar of his day.

An eruv in this context means the rabbinic device established to permit carrying on Shabbos in areas in which carrying would otherwise be rabbinically forbidden. Because this is only a rabbinic innovation, it does not work where carrying is biblically forbidden. Rav Ya’akov of Karlin writes at length exploring the various reasons to say that carrying in most cities today is forbidden only on a rabbinic level and with great expertise and comprehensive command of the commentarial literature challenges them all. If he is correct, today’s eruvin do not work and carrying is forbidden on Shabbos.

Rav Ephraim of Brody replied at length and with equally impressive expertise, defending the contemporary eruv and questioning Rav Ya’akov of Karlin’s conclusions. The two continued exchanging letters in what became a celebrated debate that has yet to be resolved. Common practice follows Rav Ephraim but many scholars personally follow Rav Ya’akov. In a recent book containing the exchange of letters and additional material and footnotes, the editor — Rav Simcha Rotsztein — lists 75 areas of disagreement between the two scholars (Kol Kisvei Ha-Mishkenos Ya’akov Ve-Ha-Beis Ephraim Be-Inyan Asu Rabim U-Mevatlei Mechitzos, Lakewood, 2020, pp. 221-223).

Rav Ya’akov of Karlin primarily asked questions based on classical rabbinic texts and commentaries. However, he also asked a question based on the biblical narrative. According to the prevailing halakhic theory that Rav Ya’akov questioned, there can only be a public domain if 600,000 people pass through the area. Exactly how and how often they must pass through is a matter of dispute. However, Rav Ya’akov challenges this theory entirely, arguing that the vast majority of commentators reject it. He also challenges the theory based on the story of the Jews conquering the land of Israel after wandering in the desert for forty years. If 600,000 Jews entered Israel and then settled in different parts of the land, how could there have been any area in which 600,000 people passed through? Some lived in northern Israel, some in the south, etc. (Mishkenos Ya’akov, no. 108 s.v. ve-gam ki nireh).

III. Eruv and the Slow Conquest of Canaan

Rav Ephraim Zalman Margoliyos of Brody (Beis Ephraim, no. 26 s.v. unsh”k mi-divrei ha-Tosafos) replies that the 600,000 only included the males above the age of 20. There were also women and children. Additionally, there were Erev Rav, gentiles who joined with the Jewish people, as well as converts and servants. There were also merchants from other nations who traveled in the land. And finally, adds Rav Ephraim, the Jews did not conquer and settle the whole land (ve-gam ki lo malu es ha-aretz ve-kavshuha). They defeated 31 kings but there was a lot of land left unconquered (ve-nisharah ba-aretz harbeh me’od). Those gentiles contributed to the number of people passing through the land. Therefore, concludes Rav Ephraim, there were many more than 600,000 people in the land of Israel at that time and there could have been an area where carrying was biblically prohibited according to those who hold that there needs to be 600,000 people passing through. To my knowledge, Rav Ya’akov of Karlin never returned to this specific point.

We see here, in the midst of a tense debate between two great early nineteenth century halakhic scholars, completely outside the realm of biblical apologetics, the assertion that the conquest of the land of Israel was slow. This is contrary to the challenge of archeologists and historians, who claim that the conquest was fast and the archeological record contradicts the biblical account. Rav Ephraim Zalman Margoliyos of Brody read the biblical account as one of a slow conquest, which supports his halakhic readings of rabbinic texts and medieval Talmud commentaries. Setting aside the question of the sustainability of such a large population at the time, which while important is not our current discussion, the pace of conquest within the halakhic literature matches that of the archeological and historical literature. I do not believe that the halakhic literature needs the support of archeology. However, in this case, the explicit statements in a halakhic context respond to the challenges of archeologists questioning the biblical text.