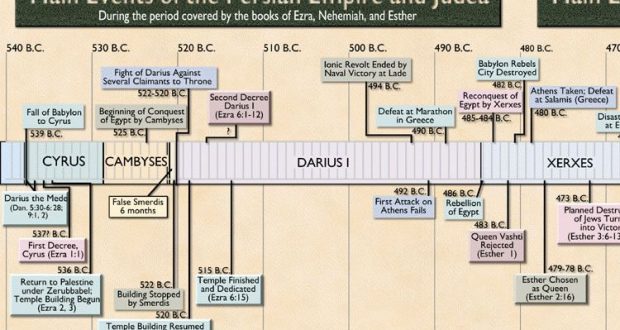 A number of years ago, my friend Mitchell First published a book, Jewish History in Conflict, describing rabbinic responses to the disagreement between rabbinic chronology in Seder Olam and that which emerges from Greek historians (and other sources). Depending on how you look at it, there are approximately 160 years missing from rabbinic history, mainly during the rebuilding and early years of the Second Temple. In particular, Seder Olam lists three Persian kings while Greek sources list over 10 kings. Mitchell First catalogs different responses throughout the ages.

In a 2019 lecture, Rav Hershel Schachter says that there are great sages (“gedolim”) on both sides of the issue — some who accept rabbinic chronology and some who modify it in one way or another. He points to the Maharshal’s (Rav Shlomo Luria, 16th cen., Poland) comment in Chokhmas Shlomo (Sanhedrin 52b) in disagreeing with the Talmud’s conclusion that he should not be considered like someone who disagrees with the Talmud because there is no current practical implication to his view. Similarly, there is no practical implication to disagreeing with the Talmud on chronology. Rav Schachter also points to Rav Zerachiah Ha-Levi (12th cen., Spain), known as the Ba’al Ha-Ma’or, in his commentary to the beginning of Rosh Hashanah where he explicitly disagrees with the Talmud about the list of Persian kings (and his colleague, the Ra’avad, says that this is against our tradition).

I would like to discuss here the view of one great authority whom Mitchell First mentions in an appendix. Rav Yosef Zechariah Stern (1831-1903) was a widely accepted halakhic authority in Lithuania and a vocal opponent of the second wave of Haskalah in Eastern Europe. He had a rich cousin who wanted to fund the publication of his writings, beginning with his commentary on the Bible. Unfortunately, the cousin died after the first two volumes were published — commentaries on the five Megillos — and most of Rav Stern’s writings were lost to history. In his introduction to Esther (pp. 30b-31a/60-61), Rav Stern addresses the discrepancy of chronologies while trying to identify the biblical Achashverosh.

He begins by quoting the analyses of Rav Azariah de Rossi (who famously rejected rabbinic chronology) and Rav David Ganz (who defended rabbinic chronology). Interestingly, these two scholars both lived at the same time as Rav Shlomo Luria, mentioned above. Seder Olam quotes Daniel, who, speaking in the first year of Darius the Mede, said that there will be three more Persian kings and the fourth will be rich. Seder Olam (ch. 28) lists the four kings as follows: 1) Darius the Mede, 2) Cyrus, 3) Achashverosh, 4) Darius I (the Great). Darius the Great completed the building of the Second Temple. Ezra (6:14) lists the kings who helped build the Second Temple as Cyrus, Darius and Artachshasta. Seder Olam (ch. 30) says that Artachshasta is a general term for a Persian king.

Rav Stern points out (as did others before him) that other rabbinic sources disagree with Seder Olam. For example, in Esther Rabbah (1:3), R. Levi equates Artachshasta with Achashverosh. In Pirkei De-Rabbi Eliezer (ch. 49), R. Yonason says that Artachshasta was the last king of Persia and R. Tanchum says that the rich (i.e. fourth) king mentioned by Daniel refers to Achashverosh. In order for Achashverosh to be the fourth, there must be another king before him not listed by Seder Olam. Rav Stern argues that these midrashim disagree with Seder Olam’s chronology, even though great minds have tried to reconcile them.

Rather, according to Rav Stern, Daniel speaks of the three kings remaining of the original Persian royalty — 1) Cyrus, 2) unknown who must be inserted according to Pirkei De-Rabbi Eliezer, 3) Achashverosh Cambyses, the son of Cyrus. Then there was a struggle over the monarchy and Darius the Great overtook the throne. This fourth was the richest and greatest, and in the second year of his reign, the Second Temple was begun. Darius the Great conquered many lands from India to Ethiopia. His son, Achashverosh Xerxes, conquered Egypt and, on his return from the war, in the third year of his reign, celebrated the conquest of 127 countries since the time of Darius the Mede. However, already in the time of this Achashverosh, the king of the book of Esther, the Persian empire began to decline from the peak achieved by Darius the Great. This Achashverosh Xerxes is also the Artachshasta of Nehemiah 13:6. The Persian monarchy then continues, unconstrained by the limit of three kings others see in Daniel.

According to Rav Stern’s calculations, the Midrash’s chronology can be reconciled with that of the Greek historians. There are no missing years according to at least some of the rabbis of the Midrash. He is one of the Gedolim who side with the Ba’al Ha-Ma’or and others in rejecting the Seder Olam’s chronology.