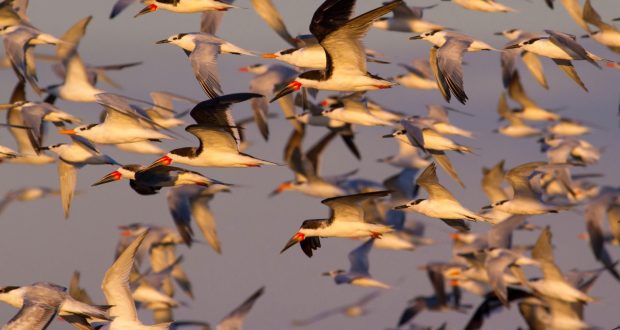 In categorizing kosher animals and fish, the Torah delineates the characteristics that make an animal or fish kosher.  Does it chew its cud and have split hooves?  Does it have fins and scales?  So long as an animal or fish fits the criteria, it is considered kosher.  The Torah does not list the names of specific animals or fish that “made the cut”, just the criteria.  However, when it comes to birds, the Torah takes a very different approach.

Rather than list the avian characteristics that render a bird either kosher or non-kosher, the Torah lists twenty non-kosher species leaving every other species, by not being listed, to be considered kosher.

Among these twenty non-kosher species listed in Parashat Shemini, are the tinshemet, the ke’at, and the racḥam. The Talmud (Chulin 63a) cites Rav Yehuda who identifies the racḥam with the sherakrak.  “Sherakrak”.  Such a curious name.  Rashi explains that the name is imitative in origin.  It was given to the bird by its very distinctive call, sherak-rak.

The bird’s call is so raucous and so recognizable that there are those who are convinced that it is the source not only of the bird’s name but also of our word for a cry, shriek.  Whether that etymology is accurate or not hardly takes away from the poetic (and auditory!) symmetry and satisfaction to be gotten from the explanation.

However, while the bird’s name is understandably associated with shrieking, it is less clear why so raucous a sounding bird would also be known as the racham.  “Racham” which is derived from the Hebrew term for compassion hardly seems like a logical or satisfying name for such a creature.

The Talmud, in its discussion, provides some connections but also leaves some questions,

Rabbi Yochanan says: Why is it called the racḥam? Because when the racḥam arrives, love/compassion [rachamim] comes to the world…. And we have a tradition that when it sits on the ground (Rashi – which is not its normal behavior) and whistles [shareik], [it is a sign that] Moshiach is coming, as it is stated: “I will whistle [eshrekah] for them and gather them in.” (Zechariah 10:8).

So here, the Talmud makes the connection more certain but doesn’t speak to our question. What is the concern about this racḥam bird and disquieting squawk?  How is it that this non-kosher bird evokes compassion in others and, most importantly, what is its connection to Moshiach?

My grandfather HaGaon Rav Bezalel Zev Shafran ZT’L (in Yalkut HaChanochi 30) addresses these questions and, as usual, brings a crystallin directness to his explanation.  He begins his exploration of this cryptic Talmudic statement by establishing two premises.  The first is centered on the Hebrew alphabet and its ascending order, from alef to tav.

We remember that the Hebrew alphabet is also a numbering system in which the numbers, along with the letters, rise in ascending order.  The first letter, alef, represents the number one.  While “one” may seem a meager presence, singular and unassuming it is, in fact, perfect in its unity and singularity.  It is whole, complete, and perfect.  Each subsequent letter/number following the alef suggests numbers divisible and complex, implying increasing disunity.

From tav, to shin to reish to kuf.  At each step, we feel the draw of unity strengthening.  The letter shin represents the beginning of this process, this march from disunity to unity. The greater the distance a letter stands in relation to the tav, the more its numerical value decreases and the pirud – disunity – diminishes until finally, we once again reach the alef and we once again find ourselves at unity and wholeness, at one.

Just as in the ascending alef, bet order, only the alef is the genuine unity without any disunity, likewise in the descending order from tav, shin, reish, kuf, there is no greater pirud than the tav, but from shin and on, the pirud consistently diminishes, one letter at a time.

My grandfather’s second premise introduces Chazal’s well-known comment that the Second Temple was destroyed as a direct result of baseless hatred (sin’at cḥinam).  That is, internal strife, inner dissension and division – disunity – so pervaded the heart of the people that it was manifested in every aspect and facet of Jewish life, the personal, the communal, the ritual and the institutional.

So pervasive was the discord and disunity throughout the community that it felt like the norm.  Recognizing the deep, existential damage such discord caused, my grandfather cries out for the urgent need for unity and alliance among all Jews and all its communities – then and now.   Our redemption will only come about when the Jews form a single band [aguda achas]; only when we are unified.  The lesson is clear, it is only if we unify and rid ourselves of the discord among us, that we can ready ourselves for the geula.

Having established these two premises, my grandfather then returns to the Talmud in Chulin.  Understanding these two premises, we can now understand, my grandfather says, the word “racḥam”.  In addition to being the name of a bird, it also denotes love, as in Psalm 18:2, Vayomar, erachemcha HaShem chizki – And he said, I will love You, HaShem, my Strength.  Or, again, when Torah speaks of Yitzchak – v’yehehav Yitzchak, the Targum explains v’rachim.

It is here that my grandfather’s insight comes into focus.  Rather than expressing opposing concepts (unity versus disunity), the name sherakrak suggests closeness, unity, togetherness no less than racham!  “Sherakrak” is composed of the letters shin, resh, and kuf, the 2nd, 3rd, and 4th letters of the Hebrew alphabet when read in descending order; that is, the letters that represent the first three steps in the march from disunity toward unity!

“When the racḥam arrives, rachamim comes to the world!”  When that march is completed, we will have arrived at unity!

It is clear.  If the Jewish people would turn away from disunity and discord and move to connect with one another in love, fraternity, peace, and friendship, then God will show us an abundance of love, kindness, and compassion, and Moshiach will come.

“And we have a tradition that when it sits on the ground…”  that is, when love pervades every sector of the Jewish people throughout the world, “…and shrakrak is whistled…” and the Jewish people bond and unify together with cords of love, without division or discord, then Moshiach will indeed come, and he will “whistle” to gather the Jewish people from their dispersion and bring them to the land of their forefathers!

In focusing on the Second Temple’s destruction, my grandfather’s text makes clear just how destructive disunity and unwarranted hatred really are to our people and community.

It is worthwhile that we build on his insight and look unflinchingly at the insights he makes clear.  Here we can ask ourselves, exactly how destructive is the disunity and unwarranted hatred that tears at the fabric of our Jewish community? The Talmud, in Yoma (9), tells us that the First Temple was destroyed because that generation transgressed the three cardinal sins of idol worship, sexual immorality and murder.

So, how damaging is disunity and hatred?  The generation punished for their transgression of the three cardinal sins was redeemed after seventy years, yet the generation of unwarranted hatred has yet to see its redemption.

Such is the deep destruction such feeling brings to our community!  Because of them, we continue to wander.

When our family recently gathered on Zoom to celebrate the publication of the fourth edition of our grandfather’s She’elot U’tshuvot R’baz, (https://youtu.be/9GdRQV6F52g) my brother, Rabbi Bezalel Safran, explained this novel passage in our grandfather’s writings and added to it the following idea – when we recite the Birkat HaChodesh, the Blessing of the New Month, we ask of God to grant us a new month filled with goodness, sustenance, love of Torah and fear of Heaven and so much more.

We then add a prayer beseeching God, “May He Who performed miracles for our ancestors and redeemed them from slavery to freedom, speedily redeem us and gather our dispersed from the four corners of the earth”.  In other words, we pray for the ultimate redemption, for the geula, for Moshiach to come and herald all the good promised by our prophets.  And then we add one more well-known phrase to the Mi She’asa Nisim; we turn to God and cry out with fervor, Chaveirim kol Yisrael – for all Israel are united in fellowship!  All Jews are chaveirim.

As my grandfather explained, racham denotes love, fraternity, peace, togetherness.  We pray for God to redeem us, to show His love and compassion to us. Our prayer can only be realized when love pervades every aspect of the Jewish people and Jewish life throughout the world.  So, we proclaim, chaveirim kol Yisrael – we are all chaveirim!   Now, we are saying, the geula can come. 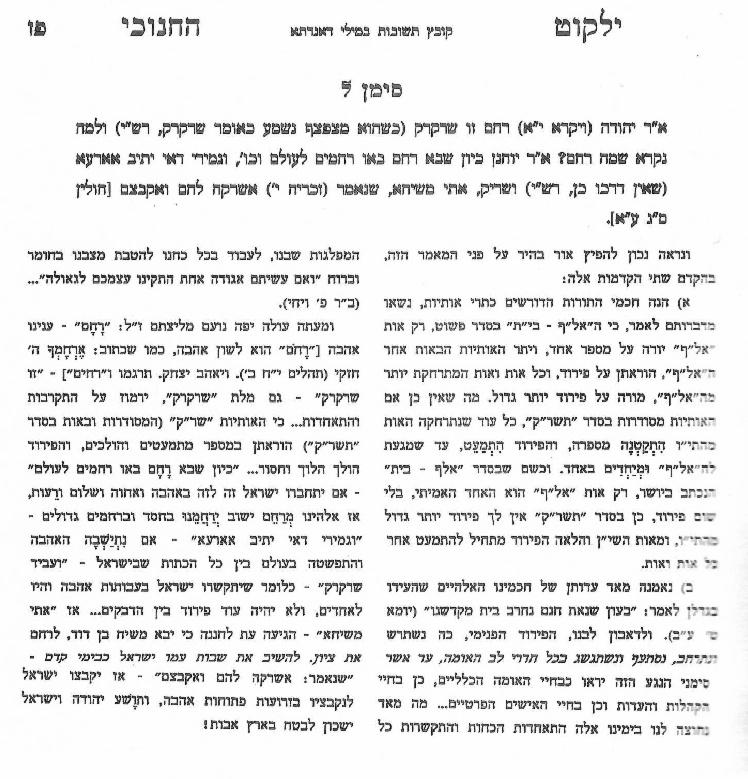