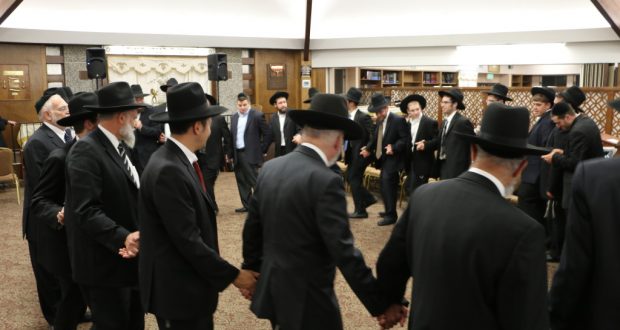 Is it Permissible to Dance on Shabbos and Yom Tov?

This year, many synagogues will reluctantly curtail or omit the dancing from their Simchas Torah services in order to mitigate the spread of COVID-19. R. Hershel Schachter published a responsum (Piskei Corona #55) on October 2nd, 2020 in which he advised that similar to Hoshanos either the chazzan (prayer leader) should be the only one making the rounds or it might be better to dispense with the dancing this year altogether. While a number of us may be chagrined to forgo our Simchas Torah dancing, I would like to take the opportunity to summarize the main opinions regarding the prohibition and potential dispensation for dancing on Shabbos (Sabbath) and Yom Tov (Holidays).

It all begins with a Mishnah in Beitza (36b) which explicitly bans clapping and dancing on Shabbos and Yom Tov:

The Talmud explains that clapping and dancing were Rabbinically prohibited “due to a decree that was made lest one assemble a musical instrument (to accompany his clapping or dancing).”

I. The Rema’s (O.C. 339:3) first explanation accomplishes the opposite of reconciliation. He writes that “Today people clap and dance and we do not stop them because it is better that they sin unintentionally.” The Rema, in this approach, affirms that the ban of the Mishnah remains in full force today. However, it seems that many take a different approach, as many great Torah scholars permit dancing and clapping during services on a regular Shabbos. As we will see, they follow alternative understandings of this issue…

II. The second approach of the Rema, based on Tosafos (Beitza 30a) tackles the issue from a different angle. Tosafos suggest that “since we are not experts in assembling instruments it is not possible to apply this ban.” In other words, while the ban did indeed prohibit dancing on Shabbos and Yom Tov, it no longer applies since the circumstances have changed.

R. Moshe Feinstein (Igros Moshe O.C. 2:100) is deeply troubled by this approach as it ostensibly contradicts a fundamental principle of Jewish jurisprudence – the law applies even absent the impetus for its creation. R. Feinstein answers based on the first approach of the Rema, that we can observe that since the earlier Rabbis did not wish to rebuke those who danced on Shabbos and Yom Tov, we can see that the will of the Rabbis was to permit such a practice when absent the circumstances. Therefore, there is an implicit understanding that the rabbis of later generations agreed to revoke this Rabbinical prohibition. (This topic deserves further analysis, but it will take us too far afield.)

In any case, it is interesting to note that the Rema only allowed for two extremes: Either the ban on dancing no longer applies, or it remains in force and the masses have been sinning all the while. However, there are more conservative approaches that attempt to provide a balanced reconciliation:

III. The third approach at reconciliation affirms that it is permitted to dance on Shabbos nowadays while also maintaining that the Rabbinical ban on dancing remains fully in effect. The Aruch HaShulchan (339:9) distinguishes between the type of dancing that the Rabbis of the Mishnah referred to versus what we permit on Shabbos. The dancing that the Tannaim had in mind was the type that accompanied instrumental music. Whereas the clapping and dancing that the Aruch HaShulchan observed was simply an accompaniment for singing alone. Along a similar line of reasoning, R. Shlomo Zalman Auerbach is cited in Shulchan Shlomo (Yom Tov, Vol. 2, 524, Fn. 3) as distinguishing between the dancing that the Mishnah referred to versus circle-dancing which he terms halicha b’alma, essentially walking.  While this discrepancy is compelling, the type of dancing that can be observed on Simchas Torah or yeshivas and summer camps can sometimes take on a more untamed nature. Thus, for those relying on R. Auerbach, it would be necessary to regulate the style of dancing they choose to promote since not all circle dances would likely constitute halicha b’alma.

Indeed, Rabbi Dr. Aaron Glatt (“COVID Considerations with Daled Minim”, Sept. 2020) advises that “maybe this year we celebrate and demonstrate our love of Torah with a special shiur (class) from the Rav (rabbi), with the congregation masked and distanced instead of dancing wildly.” The subtle message is that wild dancing is not encouraged even in a typical year.

An additional concern that may be raised is that dancing with the Torah wildly can compromise the respect of the Torah scroll itself. Perhaps another alternative, when it is safe, would be for the congregation to dance around one person who is standing in the middle of the circle and holding the Torah scroll, as suggested by R. Nachum Rabinovich (Responsa Siach Nachum, No. 40).

IV. The final approach that we will note is introduced by the Maharik and adopted by the Magen Avraham (O.C. 339:3:1): Simchas Torah is simply an exception to the rule and was not included within the ban. Since the dancing of Simchas Torah is done solely for displaying honor for God’s Torah, the Sages would have surely sanctioned it. The Minchas Elazar (1:29) extrapolates from the Maharik that not only is dancing on Simchas Torah permitted, but it would stand to reason it is acceptable to dance on any Yom Tov!

Subsequently, the Minchas Elazar provides an important caveat that dancing is a subjective way of serving God. While for some it makes them feel closer to Hashem, there are many who do not dance and find it laborious. This is an important factor to keep in mind, since dancing does not appeal to all people.

Also, R. Ovadia Yosef (Yechaveh Da’as 2:58) points out that while the Rema provided a basis for leniency, R. Yosef Karo (author of the Shulchan Aruch) ruled with a sakina charifa (a sharp knife) that dancing on Shabbos and Yom Tov was prohibited without qualification. Thus, R. Yosef urges his constituents to inform their fellow Sephardim to refrain from dancing on Shabbos and Yom Tov.

While there are undoubtedly great scholars and rabbinic leaders who have offered various ways to reconcile the ban of the Mishnah with the generally accepted practice of dancing on Shabbos and Yom Tov, it is worthwhile to conclude with R. Moshe Feinstein’s final line in his responsum on the topic:

“Since the author of the Shulchan Aruch disagrees (with the Rema) and the reasoning of Tosafos is difficult to comprehend, it at very least behooves those who are God-fearing to be stringent. However, in practice, we see that there are many who are lenient.”