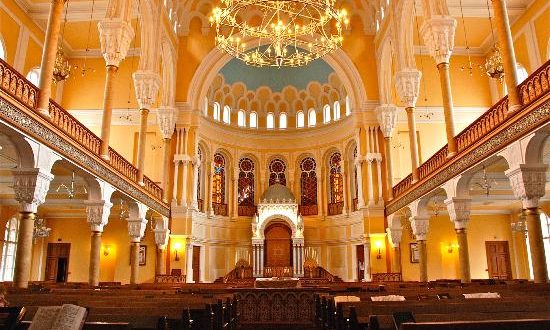 Building or Buying a New Shul

As society begins to return to life, as we pray Gd shows us the way forward without return of the coronavirus (even as we watch our brethren stumble on the road, taking steps forward and back), I was reminded of a story about two people who had feuded for years. One year, Erev Yom Kippur, one knocks on the other’s door, asks forgiveness, says they should make up, and they do, tearfully and emotionally. The next night, Motzaei Yom Kippur, he knocks on the door again, says (pardon my nonexistent Yiddish, I tried to find this online) altz iz vi es is gewen, everything is as it was.

I was reminded of the story when I read the Torah reading for the first day of Shavuot this past week, where Hashem tells Moshe to go back down the mountain and warn the people against approaching. Moshe says, surprised, how could they? I already told them! (The rabbi of the Riverdale Jewish Center, R. Dovid Zirkind, told me the Kotzker had that sense as well, thought people couldn’t steal, because the Torah says lo tignov.)

It’s a message I hope we take to heart as we move forward—if we just go back to all we had before, we are likely missing something vital about this experience. I hope we heed the implicit warnings and messages in these troubles, and move forward pleasingly in the eyes of Hashem.

Now, laws of Beit Kenesset. Shulhan Arukh Orah Hayyim 152 comes up just about every time a shul plans to renovate or rebuild, because Shulhan Arukh prohibits taking down one shul until the new one has been built. Rema extends the idea, prohibits knocking down a wall to rebuild it (in essence, leaving the shul built while the shul is improved), or to take any parts of the old shul to fill in the new one, even if construction has started. The only exception came where the walls or foundation of the old shul are literally falling down.

Mishnah Berurah points out ways the rules are stricter than they sound. Peri Megadim included batei midrash, study halls, in the rule, regardless of whether the shul or beit midrash are private or public. Many aharonim thought a rental had these strictures as well, the community could not return the space to its owners before they secured another place for their services. Plans to rebuild do not help, Mishnah Berurah writes, nor having collected all the money (as few shuls do, unless we count having arranged the necessary line of credit) and/or assembled the building materials.

Obviously, this makes it extraordinarily difficult to rebuild shuls, since we usually need to use the same spot. One major loophole, I think, allows most such rebuildings, but let’s first consider the reason for this stringency. As Taz points out, the Gemara raised two worries, a space for prayer while construction is ongoing—easily remedied, since temporary spaces are not lacking—and the worry for peshi’ah, negligence, or ones, factors out of our control.

Peshi’ah would be where a community, for example, was inappropriately certain they would raise the funds, and then fell short or made insufficient efforts (I once saw a responsum of R. Ovadya Yosef’s to the Jewish community of Teheran in the mid-70s, which had been trying for years to raise funds for a renovated shul and a mikveh, and wanted to know which to choose if they were not going to be able to build both; had they torn down the shul, they would have been left without one). The classic example of ones is where another pressing need arose, such as pidyon shevuyim, redeeming captive Jews, overriding this one (again risking being left without a shul).

This is a kind of halakhah I find interesting for its sense of what constitutes danger or likelihood of life going wrong. How often would a community fall down on the job or encounter a prior need, such as redeeming captives? Yet the Gemara instituted the rule.

The halakhah doesn’t interfere with plans to build in a new location, without need for materials or funds form the sale of the old property. Most communities, I think, are not in that position. Taz provide loophole for them in a disagreement with Magen Avraham about where a community already has other space(s) being used as shul that could easily fit the members of the shul looking to build or rebuild. If, for example, a town has a very large shul, half empty, and a smaller shul is looking to knock down its current building and rebuild, since the larger shul could theoretically absorb all those congregants should something go wrong, they can demolish the old building to make way for the new one.

Taz assumes the Gemara cared about a shul in the community, where Magen Avraham, who prohibited this, thought the rule was a matter of this shul. As Arukh HaShulhan points out, most aharonim follow Taz. I do note Taz spoke about being able to comfortably fit all the congregants, where I have seen shuls (guided by important poskim) knock down part of their building, and squeeze into the rest for the time of construction. It is, like much of life, a slippery slope.

Selling a Shul or a Sefer Torah

Siman 153 is longer than 152, so let’s start it this time, finish it up next. Shulhan Arukh starts by telling us we can make a shul into a Beit Midrash, a study hall, but not vice verse. That sentence assumes two halakhic principles, we only sell items of sanctity to buy items of a higher sanctity—ma’alin ba-kodesh ve-ein moridin, we go up in sanctity, not down– and that a study hall has the higher of the two levels.

The highest item in the hierarchy of sanctity is a Sefer Torah, which would seem to be unsellable; we cannot sell it to use the funds for the purchase of an item of lower sanctity, and we also cannot sell it to purchase another Sefer Torah, Arukh Ha-Shulhan points out, because it looks too much like doing business with Torah scrolls. However, Yoreh De’ah 270 says we can sell a Torah to fund Torah study (even personal), to find wife, or to redeem captives, for some examples. Rema prohibits selling a Torah scroll because of poverty, as long as the person is currently still able to support oneself, despite the difficulty.

Shakh there points out Beit Yosef had quoted Rabbenu Manoah, who thought these limitations applied to a Torah scroll used for public reading. An individual’s Torah scroll might be more readily sold, he thought, for a wider range of reasons, because it did not have the same sanctity.

Bringing us back to shuls and parts of shuls. Barring other factors—many responsa allow selling a shul that has already fallen into disuse, because it is then considered desolate and destroyed—items should only be sold to use the money for a purpose of higher sanctity. A shul can be sold to make an Aron Kodesh, an Ark or closet for Torah scrolls and/or for the bimah, the table or platform on which the scroll is placed to read. And so on, with the coverings of the scrolls at a higher level still, the scrolls themselves the highest.

What about selling one shul to buy another? (I assume where the new shul is already built.) Shulhan Arukh, par. 4, says it’s a debate. As Arukh Ha-Shulhan notes, the question is whether ma’alin ba-kodesh requires we use the money for a higher purpose, or just not a lower one. With Rambam as a proponent of the second position, Arukh Ha-Shulhan says many later authorities accepted that view, allowed selling a shul to use the money for another.

To move from one shul to another, this siman and a half shows us, confronts us with issues of prudence, of the kinds of unexpected life circumstances we are required to anticipate, and of sanctity, the necessity of maintaining or raising levels of sanctity, complicating questions of how to move from one shul space to another, should occasion arise.