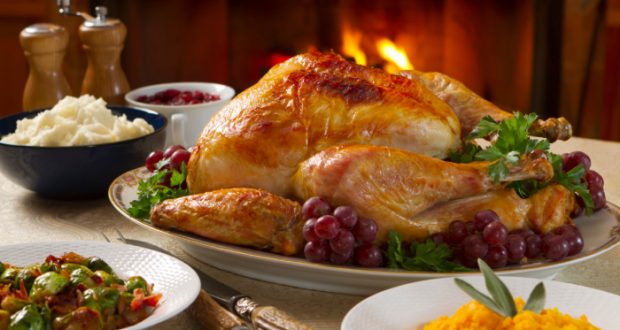 I had my bris and Bar-Mitzvah on Thanksgiving Day, with no control over the timing of the former, and relatively little on the latter. Shu”t Iggerot Moshe Yoreh De’ah 4;12, dated first day of Rosh Chodesh Tammuz 5741 (1981), takes up how Jews should relate to Thanksgiving festivities. (This responsum appears in a volume published after R. Moshe Feinstein’s passing, and some have raised questions about the responsa contained therein. In addition to a recent study which tries to show the responsa are indeed his, this responsum self-consciously adds to one he wrote nearly twenty years earlier.)

R. Feinstein starts by noting he had recently referenced a responsum he wrote in 5723 (Sivan 1963), Iggerot Moshe Even HaEzer 2;13, where he allowed having a Simcha on Thanksgiving, such as a Bar-Mitzvah, although he thought it better not to [mine was bo bayom, on the day I became a Bar-Mitzvah, which may have helped].

There, the simcha is a Jewish one; he categorically prohibits celebrating Thanksgiving for its own sake. His worry is not avodah zarah, worship of a power other than Hashem, because no priests or other religious leaders established it. The laypeople who established it might have been devout (he does not delve into the specifics of Puritan faith, to see whether it qualified as a problem, so neither will we), but more recent generations are not, nor are their celebrations of days like Thanksgiving sufficiently religious to give us pause.

Later in the responsum, he refers to people who had argued Thanksgiving should be a yehareg ve-al ya’avor, Jews would be required to let themselves be killed rather than partake, because it’s part of worshipping a power other than Hashem. R. Feinstein vigorously rejects both claims; it is factually not worship of a foreign power, in his view, and not all ‘avodah zarah-related acts obligate such self-sacrifice. Actual yeyn nesech, wine libated in service to a power other than Hashem, does not create a yehareg ve-al ya’avor obligation to refuse to drink it.

[R. Feinstein seems to be implying that even if a practice started out as an act of idolatry, non-Jews’ changing the import of the act before Jews get involved might suffice to make it non-idolatrous. It’s not his main point, but it might be relevant to other contemporary examples, such as where Westerners adopt certain Eastern practices. Originally clearly a matter of worshiping spirits or powers, many have been Westernized, purged of all that. R. Feinstein’s idea suggests they would no longer present an ‘avodah zarah issue. Which is not the only question, as we are about to see].

Walking in Their Ways

He says celebrating Thanksgiving violates u-vechukoteihem lo teleichu, the prohibition against “going in their ways,” in Vayikra 18;3. Halachah understands the prohibition to include any of their ways without inherent meaning or purpose, what’s called a chok hevel u-shetut, a futile and silly practice. To his mind, Thanksgiving qualifies.

More, were they to have a strict custom to eat turkey, Jews would have to forego turkey all Thanksgiving day (even outside of a Thanksgiving feast). He is not convinced Americans are strict enough about their customs for it to be a problem (their undisciplined attitude towards this celebration helps us decide that turkey isn’t itself prohibited).

He was sure a Jew could not make a Thanksgiving meal, though.

Yet in a later responsum, he had allowed a celebratory meal that day, even with turkey, did not think it violated u-vechukoteihem. R. Feinstein’s grandson, R. Mordechai asked about the apparent contradiction, had argued any celebratory meal on Thanksgiving day should be seen as darchei he-emori, ways of the Emorites (also prohibited), stopping other Jews from participating.

For all Rema had said the practice had to have no reason, he could not have meant none (very few people admit they act for no reason), he must have meant insufficient reason. The fact of the Pilgrims having eaten turkey to celebrate finding food does not seem enough to establish a holiday (certainly not one that lasts forever).

The question also assumes the event wasn’t actually significant to the settling of the continent. True, the Pilgrims almost starved, but the land itself had plenty of resources. Were they to have perished, other settlers would have come. Their finding a way to make it was important to them, he is saying, but didn’t have the historical significance the holiday gives it.

[He has relied on a particular reconstruction of history in reaching this conclusion, a reminder of the role extraneous knowledge sometimes plays in reaching halachic conclusions. Here, the extent to which the holiday was a reasonable and proportionate reaction to events determines whether we see it as a chok of theirs, a meaningless practice we may not adopt, or a reasonable one we may then also join].

R. Feinstein tells his grandson u-vechukoteihem operates in a not fully clear range. Having a practice develop popularly, grass-roots rather than directed by religious figures, might be enough to spare it inclusion in the category. Rema does say there has to be a reason for the practice, such as doctors wearing uniforms; R. Feinstein thinks lesser reasons (such as being thankful for an event that happened centuries ago) might also suffice.

He denies he’s changed his mind; in the first responsum, too, he had expressed doubt about the issue. To avoid the problem, in the second responsum he focused on making sure the person did not eat a Thanksgiving meal as a firm obligation, even one time, nor not do it every year (either of those make clear the person experiences it as an obligation. He seems to be saying any time a person follows any practice fully consistently–religiously, as the phrasing goes in English—the person makes clear s/he is treating it as an obligation, regardless of how they phrase it.

He does lean towards seeing Thanksgiving as a problem of u-vechukoteihem, because the non-Jews make a regular and consistent practice of it (without any reason he sees as objective enough to spare it being thought of as a chok).

[His perspective applies to a lot more than we usually notice—if some new clothing trend or hairstyle has no particular reason to prefer it to existing ones, R. Feinstein implies Jews would not be allowed to adopt it. To switch from current practice to some other practice, because the non-Jews around us have switched, counts as imitating the non-Jews.] [He’s about to move on, so I will allow myself to pause here to note how much of his analysis depends on an evaluation of the obviousness of Thanksgiving. If being grateful for events significant to the formation of the United States of America strikes Jews as a reasonable practice, much of his objection falls away. The underlying halachic reasoning, though, is very worth remembering, Jews are not allowed to adopt non-Jews’ practices unless those practices have some innate logic to them (and are neither ways of worshiping powers other than Hashem nor practices that foster lewdness or promiscuity, a piece of the equation R. Feinstein discussed briefly and I am skipping for lack of space), other than that that’s what everyone’s doing.]

The last piece of the responsum inconclusively discusses whether having a regular Thanksgiving meal might run afoul of bal tosif, adding an obligation to the Torah (earlier in the responsum, he had restricted the worry to where the Jew assumes that it’s incumbent upon him/her to have such a meal. If the Jew occasionally misses a Thanksgiving, for no particular reason, s/he avoids much of the problem).

Ramban saw bal tosif as particularly focused on holidays, and Yerushalmi Megillah thought the decision to establish Purim caused no little angst for the scholars of the time, who understood Vayikra 27;34’s “eleh he-chukkim, these are the commandments” to mean even prophets cannot add commandments to the Torah.

It would mean Chanukkah also had to have a Scriptural source, and would negate the practice Magen Avraham 686;5 reports in the name of Maharam Al-Ashkar, for any community or family which experiences a miracle tp establish a mini-Purim to celebrate. He refers us to another responsum of his that deals with the issue at greater length, but that would take us too far afield. For our purposes here, R. Feinstein has reminded us of a set of considerations Jews are supposed to include in their evaluation of whether it is proper, acceptable, or impermissible to adopt a practice that started in the non-Jewish world. We have to be sure it does not count as worship of another power, does not call for us to imitate what we see in the non-Jewish world with no good reason, and to be sure we are not unacceptably adding to Torah law.

And then we can go along with what we see around us.