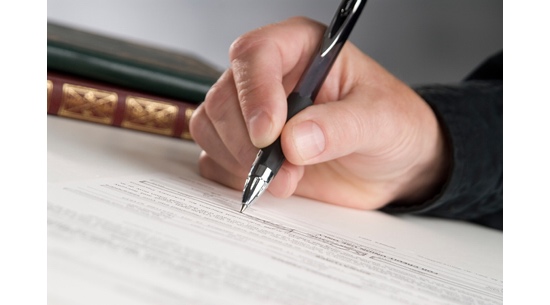 Shu”t Iggerot Moshe Choshen Mishpat 3;30 reproduces several forms R. Moshe Feinstein used in his personal life and/or wrote for others, the last of which was dated 23 Sivan 5731 (1971). I am charmed by the goodwill in the gesture—these forms do not show his creative halachic thought, no one would have noticed had he left them out. They are here solely to help readers learn how to navigate certain halachic procedures.

He starts with the prayer to be said when setting out on a journey. When the prayer articulates our hope for Hashem’s guidance, R. Feinstein has the phrase ve-tadricheinu le-shalom, set our path to peace; ArtScroll has that as well, but a version I found on the Internet did not. R. Feinstein’s version asked Hashem to help us reach (tagi’einu) our destination, whereas the Internet version I found spoke of Hashem guiding us there (tancheinu).

R. Feinstein’s version asks Hashem to return us in peace as well, which the Internet version did not, and which ArtScroll claims is only for one who plans to return the same day. Finally, when we ask to be saved from all sorts of troubles, R. Feinstein’s version refers to them as troubles in formation ba-derech, on the way, where even ArtScroll has la-‘olam, to the world.

R. Feinstein’s sale of chametz form has more points of interest. First, as of 5739 (1979), R. Feinstein relied on his student, R. Nisson Alpert, to sell his chametz (he did not do it himself, is my point). He specified chametz, whatever has a suspicion of being chametz, and all mixtures of chametz.

Then he sets out the sale in remarkable detail. He lists the chametz he is selling—for example, he has eleven containers of schnapps, some full, some only partially full, which add up to about the volume that would fill ten containers. He specifies which rooms/closets he plans to rent to the non-Jew (for the non-Jew be in possession of the place the chametz is housed, in addition to the chametz itself), such as the closet in the hall, near the door, towards the south and the porch which goes from the largest room in the apartment to the park.

After he gives his address (455 FDR Drive, 2nd floor, right side), he includes the chametz which his yeshiva, Mesivta Tifereth Jerusaleim (MTJ) is selling, in the same detail. The MTJ kitchen had sixteen bottles of schnapps, four small containers of flavor, a pint of vinegar, four containers of soup, and so on.

He also authorizes R. Alpert to sell chametz on behalf of his son R. Shalom Reuven (and his yeshiva, MTJ on Staten Island), and grandson R. Mordechai Tendler (R. Feinstein was in his early eighties by this point, so I find it a bit amusing that his son and grandson still asked to be included in his document).

We are not told how much or what kind of chametz R. Reuven and the Staten Island yeshiva had, for R. Tendler, we are. R. Feinstein seems to have preferred such detail, but not required it.

On the fifth of Tammuz 5723 (1963), R. Feinstein wrote a certificate of ordination for a member of a Kollel of Spring Valley. He says they’ve met several times, spoken at length and briefly about many different matters of Torah in various subject areas.

The conversations were to give R. Feinstein a sense of his character, knowledge, and reasoning. He certifies the young man knows “many” tractates and the opinions of codifiers of Jewish law, knows how to reason through a topic, making the proper comparisons and distinctions to come to valid halachic conclusions.

Of fine character and fear of Heaven, the newly minted rabbi also studies assiduously, leaving R. Feinstein comfortable to certify him as worthy of being called rabbi, with permission to teach Torah and to serve as a rabbinic court judge, yoreh yoreh yadin yadin, as well as to take the pulpit of any congregation which wants him.

The responsum then includes two forms for pruzbol, the document Jews sign at the end of a shemittah year, formally transferring all debts owed them to the court. The court then authorizes the person to collect the debts on its behalf (and keep them, a legal fiction allowed because the obligation to forego debts every seven years is currently rabbinic). The forms are both from Elul 5705 (1945); other than having his son, David (a teenager at the time), sign one of them as a judge, they are boilerplate enough to leave them for now.

The same is true for the tena’im he records, where the parties to a wedding agree the financial commitments have been fulfilled on both sides.

The next form is one I had not realized was needed. Shulchan Aruch Even Ha-Ezer 169;4 records a requirement for judges to formally declare the place they will convene to oversee the chalitzah, the shoe-spitting ceremony which allows the widow of a childless man to marry a man other than her brother in law. In the form in front of us, R. Feinstein agreed with his fellow judges to go to the library room.

He does not identify the building, I think because the point of the form was to establish the library as the place, not to be sure others could know where the chalitzah had occurred.

He also shares a certificate of having had a chalitzah, with no surprises to it.

Versions of Wills: A Gift to the Woman

The rest of the responsum gives us different options for how to write a will. [The Torah limits technical inheritance to sons, the first-born son getting twice as much as each other brother. Jews have been circumventing the standard for centuries, with multiple strategies for how to dos o without directly opposing Torah law].

The first option, from 18 Tevet 5731 (1971), includes the daughter by giving her a gift equal to a full share of the inheritance. The mother making the bequest (the form is written in the first person; I know it was a mother because the next form is the certificate issued by the court, who tell us they told the woman in Yiddish what was being written in Hebrew, and she agreed to it all) mentions her awareness of death, I think because commands machmat mittah, because one sees death coming, have greater halachic weight. She clearly wants her four children to inherit equally. Officially, she asks her three sons to give their sister a quarter of the estate, and expresses her confidence they will heed her wishes,

She has also executed a legally valid will, for the local government to enforce these provisions.

The previous form works when the estate goes directly to the heirs. Where there’s an intervening party—such as a widow—one option is for the original benefactor to lay out the stages of the inheritance. In the example R. Feinstein records, a man (who the form says is “healthy, walks in the marketplace lucidly,” the halachic equivalent of “sound mind and body,”) wanted his widow to have full use of his property for the rest of her life.

After she passed away—or remarried—he wanted the estate to go to his three daughters and a son, again by the son giving the sisters a gift [this technique works as long as the son follows his mother or father’s wishes, which sometimes complicates matters]. They would also all have to pay off his widow’s (who is their mother) ketubbah, as instructed by a rabbi.

[I think he did not just give it to his wife because he would too obviously diverging from the Torah’s model of inheritance by the sons. This way, he’s following a model in the Gemara already, where the man gives a temporary gift, and at some point in the future, the inheritance goes to the heirs, with requests/commands to give certain gifts to others, in this case the sisters].

The final form, the one from 23 Sivan, goes back to the gift model, although with the two daughters getting only a quarter of the estate each (and from which the unmarried daughter will have to pay for her eventual wedding, which usually takes a tenth of a father’s property). Not the most equitable distribution by our lights, but the one which gave us the opportunity to watch R. Feinstein educate the public as to the exact wording of some of the forms of Judaism.