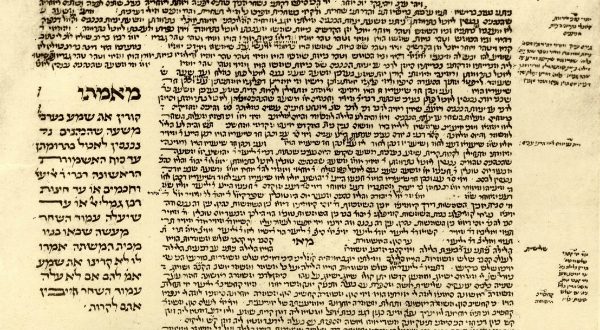 by R. Aryeh Leibowitz, author of the recently published The Neshamah: A Study of the Human Soul

The Gemara in Nedarim 3b seeks an example of the prohibition to violate a vow or oath: “He shall not violate his word – לא יחל דברו (Devarim 30:3).” The Gemara suggests a case of a person who takes a vow (נדר) to eat a loaf and then does not eat it – “ככר זה אוכל ולא אכלה.”

R. Akiva Eiger questions the validity of this example. A vow (נדר) cannot obligate a person to do an action. The Gemara teaches (Nedarim 2b) that the difference between a vow (נדר) and an oath (שבועה), is that a vow creates a prohibition on an object (איסור חפצא), whereas an oath (שבועה) creates an obligation on a person. Meaning, an oath can obligate a person to do an action or to refrain from doing an action, whereas a vow is only able to prohibit an object from consumption or use. [1]An exception to this rule is a case when a vow is taken to prohibit an action, such as taking a vow NOT to eat a loaf. Some Rishonim hold that through the principle of ידות the individual’s … Continue reading How then can the Gemara suggest a vow (נדר) that obligates a person to eat? R. Eiger leaves this question unresolved.

The Achronim attempt to explain the language of the Gemara in light of R. Akiva Eiger’s question.

The Sefer Avnei Shaiyish (R. Shmuel Shtark, Buchach, Ukraine, 19th century) argues that even though the Gemara is supposedly seeking an example of a vow (נדר) that violates the prohibition of “He shall not violate his word (לא יחל דברו),” the Gemara brought an example of an oath (שבועה) since the terms for vows and oaths are often used interchangeably.

A more creative suggestion is made by the Chasam Sofer (R. Moshe Sofer, Germany/Slovakia, 18th-19th century) and Hagahos Poras Yosef (R. Yosf Skofich, Dayan of Vilna, 19th century) that the case in the Gemara is where a vow was made to prohibit the object of loaf A if the individual fails to eat loaf B. Then he eats Loaf A. At this point, if he fails to eat Loaf B, Loaf A will retroactively be a prohibited object and he will have violated a prohibition. Hence, the Gemara states that if he fails to eat Loaf B he violates the prohibition of “He shall not violate his word (לא יחל דברו)” via-a-vis Loaf A. Accordingly, the Gemara reads: [Loaf A is not prohibited,] If I eat [loaf B], and then he does not eat [Loaf B, after having eaten Loaf A].

However, this suggestion is hard to accept. The Gemara had a much easier example to give. Namely, that he took a vow prohibiting a loaf and then he ate it! Indeed, the Beis Meir (R. Meir Pozner, Prussia, 18th century) suggests that there must be some error in the text of the Gemara. He surmises that the correct text must be the more straightforward case that one took a vow to prohibit eating a loaf, and then he ate it.

In an undated Vatican (Ebr. 487) manuscript we find the text: “כגון דאמ’ ככר זו עלי ואכלה” – “That he said, ‘This loaf is prohibited to me,’ and then he ate it”

In a Munich Library manuscript (95), dated in its colophon to 1342, the text is slightly different, using a language of an oath and not a vow, but with the same intention. The text reads: “כגון דאמר ככר זו אינו אוכל ואכל” – “That he said, ‘I will not eat this loaf,’ and then he ate it.”

We see that the three extant manuscripts suggest that the conjecture of the Beis Meir was correct. Additional support is garnered from the first printing of the Yalkut Shemoni in Parshas Naso that also contains this alternate text.

It is not until the first complete printing of the Gemara, undertaken by the gentile printer, Daniel Bomberg from 1519-1523, that we find the seeming errant language entering the official text of the Gemara. [3]In the commentary of R. Avraham Min Ha-Har (Provence, d. 1315), the text appears as it is in our printed Gemara. R. Avraham seemingly is of the opinion that a vow is not limited to prohibiting … Continue reading

In the Sefer Shalmei Nedarim )R. Alexander Sender Kaplan, Lithuania, 19th-20th century) the author writes that he found the text suggested by the Beis Meir in the Yalkut Shemoni and that he received a letter from R. N. N. Rabonovitch, author of the Sefer Dikdukei Sofrim, that the medieval manuscripts also contain the Beis Meir’s text. Thanks to modern access to manuscripts, the Beis Meir’s theory to answer R. Akiva Eiger’s question can be verified.