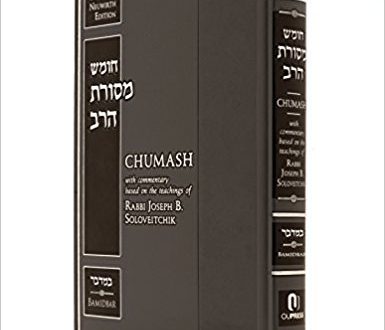 Vort from the Rav: Ki Seitzei

Our faith in man’s goodness should not blind us to the latent demonic in man. Civilized men can become the personification of evil. The thin veneer of social restraint can suddenly be lifted, exposing the ugly, brutish potential of man. Created “in the image of God,” man can also assume a satanic identity. He is capable, from time to time, of going berserk, of turning into a monster.

“The emissaries went forth in haste to carry out the king’s bidding. The edict had been announced in the capital city of Shushan. The king and Haman were dining, but the city of Shushan was cast into bewilderment” (Es. 3:15).  Their bewilderment was due to the traditional naivety of the Jew who cannot believe that human beings may act like predatory beasts of the jungle. This was a traumatic discovery for the Jews of Persia. The Jew believes intuitively in man’s inherent goodness, that a Divine spark inhabits every human being, even the habitual sinner and criminal. This is the basis of teshuvah, that the kernel of man’s soul ever remains uncontaminated, and may yet induce a moral regeneration. The sud­den confrontation with total “Amalek-style” cruelty was, there­fore, a painful and rude awakening.

Amalek is obviously more than a nomadic tribe. He is more than a particular group, nationality or people. He is Everyman gone berserk, who has shed his Divine image for that of Satan. Any nation which declares that its policy is to destroy the Jewish people is Amalek, for it has emblazoned on its banner the slogan of impassioned hatred: “Come, let us destroy them as a nation, that the name Israel may no more be remembered” (Ps. 83:5).  This is the per­sistent villainy that the Lord bids us combat and against which He has sworn eternal enmity. It is for this reason that there is a positive Torah commandment: You shall (perpetually) remember what Amalek did to you…do not forget”

Hitler and Stalin were clearly Amalek per­sonified. Jews in Germany, and even in concentration camps, discounted rumors of mass killings until it was too late. In Com­munist Russia, many Jews continued to support Stalin, despite his demonstrated tyranny and anti-Semitism. The Jew is naive in his faith in man and is therefore particularly vulnerable. “Can it happen here?” the Jews of Persia probably asked themselves, incredulously.

Jews everywhere, even those dwelling under benign conditions, must answer decidedly: “Yes, it can happen here and elsewhere, as it has occurred in the past.” The ethical sensitivity and respect for man, which was so successfully imprinted upon the Jewish personality by the Egyptian experience and reinforced by the preachings of the Prophets, should not blind Jews to stark realities. A sober awareness of dire possibilities will, hopefully, lead to vigilance and to precaution. Amalek is an historic phenomenon; Lo tishkach—the lesson must never be forgotten. (Reflections, Vol. 1, pp. 179-181). (See commentary on Ex. 17:8-16)