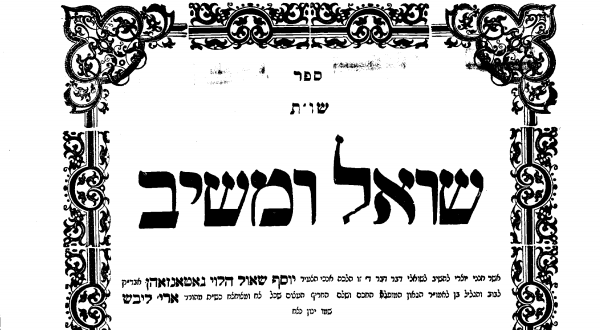 In this series, one of my secondary goals is to learn from and gain a passing familiarity with a wide range of authorities. R. Yosef Shaul Nathanson (1808-75) is someone whom I’d like to include but whose writings I find difficult to summarize effectively. On the twelfth of Av, 5613 (1853), he wrote three different brief responsa, and their brevity makes them easier to digest. As they were all written on the same day (not just the same date in differenty years), they sort of constitue a snapshot of that one day of this important rabbi’s life.

In Shu”t Sho’el U-Meishiv Mahadura Tinyana 3;108, he was asked about a young woman who had been told by doctors that she had to let her hair grow thick and interwoven (the term he uses is kaltnis, which is a Polish-Russian word that one website I found translates as dreadlocks; Shu”t R. Akiva Eiger Tinyana 73 defines it as she grew her hair into a thicket), and never cut them, to avoid a life-threatening headache. What can such a woman do in terms of mikveh? For a year, she hasn’t gone (which means she and her husband have ceased the physical part of their married lives).

Shu”t Panim Meirot had ruled she cannot go to mikveh, because this hair constitutes a chatzitzah, a barrier to the water reaching her entire body, but R. Nathanson is puzzled by the stringency, since he thinks the issue is a safek de-rabanan.

(He doesn’t explain further, but I think he means that the only Biblical barrier to immersing is when there’s some chatzitzah that bothers her, that she intends to remove. If she doesn’t mind it—as is the case here, since it’s what’s staving off her headaches– it’s called einah makpedet, that she would not intend to remove it. Further, Rashba held that if most people in this situation would not mind it, it’s not considered a chatzitzah. While Rambam and Tur define chatzitzah by this particular person’s view of it, R. Nathanson argues that since here she’s not allowed to remove it, it would also be defined as einah makpedet, that it does not bother her—since she will leave it on her person no matter what.

That makes the barrier to the water reaching her entire body a mi’ut she-einah makpedet, a minority of her head that she does not wish to remove. As a chatzitzah, that at most is a Rabbinic problem; where it might be medically necessary, it’s a safek de-rabbanan, an unresolved doubt about a Rabbinic problem.)

A Good Idea or a Medical Necessity

R. Nathanson thinks Panim Meirot might have ruled less stringently about this woman anyway, because his case seems to be where the doctors had just told her that, going forward, it would be a good idea if she did not cut her hair. In that case, R. Nathanson suggests, the refraining from immersion was not an established medical treatment, and that therefore did not have enough halachic weight to allow going to mikveh with what Chazal decided should count as a chatzitzah.

In our case, the cessation of her headache ever since she let the hair grow supports the doctors’ prescription; since they had also said that cutting the hair was dangerous to her health (in this case, and not Panim Meirot’s), it’s a safek sakkanah, an halachically meaningful possibility of mortal danger. That allows us to push aside Shabbat prohibitions, so it would seem clear that it would allow her to go to mikveh with what might be a Rabbinic chatzitzah on her head.

(He ignores a possible counterargument, that yes, we would push aside halachot to help her, but that we cannot make an invalid immersion valid. I think he’s relying on the fact that since it’s a Rabbinic problem, they clearly would have suspended their concern to help her in this life-threatening situation.)

Truth is, even a rubo ve-eino makpid, a majority (of her hair or body) that doesn’t bother the person, is still only a Rabbinic issue formikveh. Especially since we’re talking about iggun, the interruption of this woman’s married life, and kashim gerushin, divorce is “hard,” a way of saying that we avoid it if possible, we should be lenient on this question.

Two further reasons to work hard to keep them together are that the husband will necessarily stop being involved in procreation (at least until he finds another wife) and that she is young, so if she finds herself divorced (and unable to remarry, since she cannot go to mikveh), we have to worry that she will stop caring about those issues and conduct herself promiscuously.

For these reasons, he says she can immerse in the mikveh, and resume her marital life.

Shu”t Shoel u-Meishiv Revia’ah 1;59 discusses bittul avodah zarah, when a Jew can or cannot render an object no longer an item of idolatry, of worship of powers other than Hashem. (The idea of bittul is the source of the practice of knocking off the nose or ear of statues; such a degrading act makes clear that it’s not an item to be worshipped. As important background, bittul only works while the item is not in a Jew’s possession; once the Jew takes ownership, bittul cannot happen, and the item has to be destroyed.)

R. Nathanson mentions that on the twelfth of Av of 5613, he was learning Avodah Zarah, and reached pages 52-53. (He is the only respondent I’ve encountered who includes these kinds of biographical facts, with dates. He doesn’t just tell us what he realized while learning Avodah Zarah, he often tells us what date he was learning it.) The Mishnah says a Jew cannot be mevatel an item of avodah zarah that belongs to a non-Jew.

When the Gemara says that’s obvious, it explains that the Jew owned the item in partnership with the non-Jew, and we therefore might have thought his bittul would work, since he had some ownership stake in it.

For all its brevity, the responsum quickly becomes a technical discussion (Bach Orach Chayyim 586 assumed it is impossible to take possession of an item that belongs to someone else, and Magen Avraham disagreed based on our case. Rava says a Jew’s inability to nullify the avodah zarah of a non-Jew is out of fear that the Jew will pick up the item, thus taking possession of it and making it anavodah zarah that belongs to a Jew. But since the case is where a non-Jew owns it, that should be impossible.).

The back and forth is enlightening for those involved in that topic, but for our purposes, I want to note only two points. First, R. Nathanson tells us he, too, had had Magen Avraham’s problem, and had written in his notes on Shulchan Aruch that Rashi makes clear that lifting an item only constitutes an act of acquisition when the item is hefker, ownerless. (When he was younger, he took notes on or in his Shulchan Aruch, and remembered those notes years later).

The other point of the back and forth that I did not want to leave unreported is that R. Nathanson understands the Gemara to assume that a non-Jew can effectively nullify a form of idol worship even if not an adherent of that cult or sect. (In his example, even if this non-Jew worships Pe’or, s/he can nullify a Markolis. (I find the whole discussion of nullification interesting, since it means that halachah separated the odious religious aspect of the item from its beauty aspect. As long as the first aspect had been gotten rid of, a Jew coul down the item and enjoy its beauty/ cultural value.)

Later in that volume, Shoel u-Meishiv Revia’ah 3;18, he notes that R. Yitzchak Shmelkes had made a suggestion to him on the twelfth of Av of 5613 (another example of his inclusion of biographical details). When one defendant is convicted of two crimes, the principle of kim lei be-derabbah minei says that the more significant punishment overwhelms the less significant one (that’s a too-brief summary of an issue that has generated much discussion; it’s not only about punishment, for example, because even if the perpetrator acted be-shogeg, unwittingly, and will never receive the more severe punishment, s/he is still exempt from the lesser one).

R. Shmelkes had pointed out that if the two punishments are death and lashes, there’s another reason the defendant could not be subjected to both. Lashes require the community to evaluate the criminal’s ability to live through the punishment, and that doesn’t apply to someone liable for death anyway. If so, the Gemara’s case (where it had to invoke kim lei be-derabbah minei) must have been where the obligation in lashes came for one aspect of the act, and came first (so the person would have been liable), and the death penalty for another.

After discussion I have to skip, he notes that on Shushan Purim 5614 (more than seven months later!), he was learning Makkot 13b, where R. Akiva says that while a person who committed a capital crime will not also receive lashes, one who violates a karet prohibition will get the lashes (for that crime and/or another one he committed at the same time), since s/he might repent for the karet prohibition, and the Heavenly Court will accept that penitence (so that this person is not clearly receiving two punishments for the same act).

That, too, leads to some discussion about whether it’s future repentance that’s being discussed, or existing repentance, in a way that would again take us too far afield.

That, in fact, is my usual experience of R. Yosef Shaul Nathanson, that his responsa tend to be less about specific halachic questions than about broad topics he dealt with over the course of days, months, or years, and present his thought process along the way to his conclusion.

It makes him difficult to bring into our orbit, but for the twelfth of Av, we were fortunate enough to see an halachic conclusion of his, that a woman could go to mikveh even though she seemed to have a lasting chatzitzah, and some thoughts about two other halachic topics, when items of idolatry can be nullified, and which punishments preclude or subsume others.