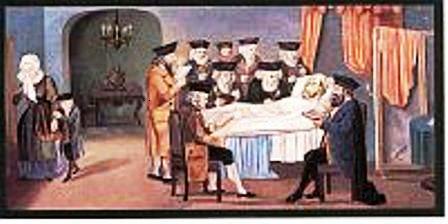 Ya’akov’s Deathbed and How We Say Shema

The selection of Rambam we’re going to see this time is the one that first brought me to want to study these kinds of passages in the Mishneh Torah, where I sat back and said, “wow, why would Rambam include that ?” To appreciate it fully, let’s start with the Gemara, and then see what Rambam did with it.

The Gemara wonders why we do say it, and tells the following story (attributed to R. Shimon b. Lakish): in last week’sparsha, Bereshit 49;1, Ya’akov gathers his sons and says he’s going to tell them what’s going to happen in acharit hayamim, the end of days. The next verse, he again calls for them to gather and listen to him, then speaks to each of his sons about his future.

Maharsha explains it was that odd flow that hinted at the drama between the two verses. Ya’akov wanted to reveal ketz hayamin, the (Messianic and beyond) End of Days, but the Divine Presence left him. He worried that that was because one or more of his sons wasn’t worthy, had left true faith and service of God (the phrasing used is “perhaps my bed has some invalidity to it, like Avraham had Yishmael, and my father had Esav;” years ago, I heard Dr. Aviva Zornberg point out that Midrashim and Rashi see Ya’akov as repeatedly concerned about this issue, that it was both important and a source of worry to Ya’akov lest any of his children not make it to be part of the Jewish people).

The Genesis of Baruch Shem Kevod

His sons, to assuage him, say, “Shema, Yisrael, Hear O Israel (meaning their father, Yisrael), the Lord Our God, the Lord is One.” By which they meant, the Gemara clarifies, the same way you serve only one God, so too do we. He respondedbaruch shem kevod malchuto le-olam va’ed, Blessed is the Name of the Honor of His Kingdom forever.

When it came to establishing our practice of reciting Shema, the Sages could not see saying that phrase, since it doesn’t appear in the Torah, but also couldn’t see refraining from saying it, since Ya’akov had said it, so they instituted saying it in a whisper.

Maharsha was bothered by the pairing, since Ya’akov said it as a response to hearing his sons invoke Hashem’s Name, whereas Moshe Rabbenu said it as a verse in the Torah, part of teaching the Jewish people what they need to know. Since the two cases were different, Maharsha wonders why we could not have said it when we call to Hashem, as Ya’akov did, but not when we encounter Hashem’s Name in study, as Moshe Rabbenu did not.

His answer is that once the verses were included in the Torah, to loudly insert a break between them is a genai, inappropriate, so we say it in a whisper.

Making It About Monotheism

In Laws of Recitation of Shema 1;4, Rambam explains the whispered recitation of baruch shem as a masoret hi beyadeinu, a tradition we have, that when Ya’akov gathered his sons to his deathbed, he commanded them about belief in the One God and the path of God Avraham and Yitzchak had followed, and then asked them, is there perhaps one here who no longer adheres to that worldview, that no longer believes in the One God?

Let me pause to note that by calling it a masoret, a tradition, Rambam is saying that this is how we understand the history to have occurred—Resh Lakish wasn’t inferring something from verses that make a pedagogical point, he was relating a tradition about what happened before Ya’akov’s passing.

Rambam has also omitted the whole End of Days part of the story. Kessef Mishneh suggests that it wasn’t germane, that that exact reason he gathered them wasn’t important. He also mentions Sifrei’s comment on the verse “Shema Yisrael,” which says that Ya’akov gathered each of his sons individually, to check that none of them had complaints or issues with the Creator and faith. If Rambam was relying on that source as well, it would explain why he spoke of checking out their faith.

That helps explain why Rambam saw this story as worthy of inclusion in the Mishneh Torah, but not why he ignored the connection to revealing the advent of Mashiach.

Revealing the End of Days

I would suggest one more possibility, based on a different reading of “Ya’akov wanted to reveal.” We usually understand that as Ya’akov intended to tell his sons exactly what would happen to them in history, and that Hashem didn’t want that because it would take away the challenge of living out history successfully. But another way to read those words is that Ya’akov wanted to reveal to his sons how to achieve the End of Days; if so, strengthening their faith is exactly that way.

If Ya’akov was going to tell or show them something that would make it impossible for them to stray from faith, that too would a sort of “revealing the End of Days,” since it would show them how to get there in a way they could not but sign on to.

When the Divine Presence left—presumably because Hashem didn’t want that point made that clearly, Hashem wanted the Jewish people to stumble through history until they came to that level of faith on their own—Ya’akov worried. The nature of that worry, too, supports Rambam’s view, since he jumps to assume that the Divine Presence leaving was a sign of his sons’ lack of faith—if faith wasn’t the topic at hand, why would he assume that? If he planned to reveal the timing or nature of the Messianic era, it’s not clear why he should see the loss of Presence as a sign of lack of faith. But if the whole issue was faith, it works better.

Rambam diverges from the Gemara’s telling also in that he throws in that Ya’akov’s checking whether his sons still adhered to proper faith was similar to Moshe Rabbenu’s adjuring the Jews in Devarim 29;17, “lest there be among you a man or woman whose heart is turning away from Hashem, etc.”

Pesachim did not refer to this, so Rambam seems to be making a point of his own. It could be that this shows that a Jewish leader would likely be worried, or even was supposed to be worried, about such issues on his deathbed, and therefore adds credibility to the tradition that this was what Ya’akov did with his sons.

It might, it seems to me, also be a subtle suggestion that we all should think that way, that before any of us leave the world, we should do our best to ensure that those who follow us—children, students, friends, disciples– are solid in their faith in the One God.

Rambam says that we say it in a whisper, but does not include the reason the Gemara gives, balancing imitating Ya’akov Avinu with Moshe’s not having said it. He also does not include the common custom to say it out loud on Yom Kippur, since we’re like the angels (Hagahot Maimoniyot mentions that last one, perhaps because it was an originally Ashkenazic custom).

Let’s close by looking at how Aruch HaShulchan recorded this. In Orach Chayyim 61;4, he offers the simple meaning of Shema, after noting that there were certainly more esoteric ones. He says that Rashi interpreted the verse to mean that Hashem Who is currently Elokeinu, our God (in the sense that we are the only ones who recognize Him, as it were), will one day be One, in the sense that all nations will recognize and accept Hashem as the Master of the Universe.

Aruch HaShulchan says is all we hope for, that Hashem’s Name be recognized and sanctified by all, which is why we add the phrase baruch Shem, that at that time the Name of the Honor of His Kingdom will be revealed to all, so we now, quietly, express our blessings of it.

It’s not yet universal because of our sins [by “our,” he could mean people in general, but he might mean Jews in particular; the latter option seems to be saying that if the Jewish people acted properly, not only would Mashiach come, but the whole world would be brought to recognition of Hashem]. On Yom Kippur, when we don’t have sins, we say it out loud, the atonement of the day making us able to speak openly about a world where everyone recognizes Hashem.

After that lengthy introduction, he links it to the Ya’akov/Moshe dichotomy, saying that Ya’akov could say it out loud because the Jews in his time were righteous (he says everyone was righteous, which can clearly only mean the Jews); Moshe did not say it out loud, though, since the people had committed the sin of the Golden Calf, and more. He then references Rambam’s reading, that “Shema Yisrael” was the sons calling out to their father Ya’akov.

I can’t be sure, but I think Aruch HaShulchan was trying to offer a reading that combined Rambam’s idea that the discussion was about faith in Hashem, bring it closer to the Gemara’s casting it as being about revealing the End of Days, and explain the whisper and the Yom Kippur custom. The missing piece, in his reading, was the equation of the End of Days with the time that baruch shem could be said out loud, since all would recognize Hashem, and that that coming depends on our managing to free ourselves from sin, as on Yom Kippur.

Aruch HaShulchan, I am suggesting, was implicitly clarifying what he understood Rambam to mean in his presentation of Pesachim.

One more example, then, of aggada becoming halachah. A story we could have imagined treating as “Bible school” material was instead understood as a longstanding tradition of the Jewish people, teaching us about how Ya’akov handled his deathbed (and, perhaps, how we should handle our own) as well as explaining the way we say Shema, and what we mean as we say it.