Following a Possibility All the Way Through 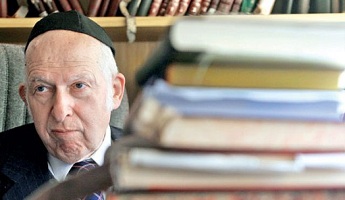 Blogging R. Lichtenstein, Taharot, Week 2: Following a Possibility All the Way Through

One of the trademarks of R. Lichtenstein’s style of teaching, both in my memory and as it comes through in the volumes of his shiurim that we are dipping into together, is his interest in all the possible ways to construe a Talmudic discussion, his willingness to follow each possibility all the way through, to see what it might teach. One example comes up when he discusses the levels of ritual impurity.

A classic (and not inaccurate) way to express those levels would be to say that a corpse is considered אבי אבות הטומאה, the essential source of ritual impurity, that something that comes in contact (and other items the Torah designated ritually impure, such as certain dead rodents) with that becomes an אב הטומאה, loosely, a source of ritual impurity. A person, tool, or container that comes into contact with an av, a source of impurity, becomes a rishon, a first level of impurity; food that comes into contact with a rishon can become a sheni, a second level (liquids susceptible to impurity become a rishon, but that’s a special rabbinic rule regarding liquids); items of terumah (the 1 ½-2 /12% of a harvest given to a kohen) can become a shelishi, a third level (and then can no longer be eaten as terumah, but rather have to be burnt), and kodashim, items of sacrificial service in the Beit HaMikdash can become a revi’i, needing to be burnt even if they came into contact only with a shelishi.

The easiest way to understand that, R. Lichtenstein is aware, is as a slow diminution. As if impurity were some kind of actual substance which, when passing from one source to the next, is diluted or loses some of its intensity. He addresses that possibility throughout the shiur.

But he also raises another possibility, based on an almost casual discussion in the beginning of Baba Kamma. The Mishnah opens with a list of four avot nezikin, four primary categories of damages; following up on that, the Gemara discusses other places where the terminology of avot and toladot applies, primary and secondary categories of whatever topic is under discussion.

Two of those are melachah, prohibited creative activity, on Shabbat, and ritual impurity. One of the characteristics of toladot is that they cannot create further toladot (R. Lichtenstein mentions that Rabbenu Chananel disagreed, but he finds it very extreme, in that it, for example, leads to an extraordinarily long chain of Biblically prohibited activities on Shabbat). If so, that should mean that there’s no ritual impurity beyond a sheni, since the av created the rishon, the first level, and that rishon (which is a toladah, an extension of the av) can create a sheni. But in that model, it should stop there; how do we get to the third and fourth levels of impurity that we see regarding terumah and kodashim (sacrificial items)?

A Digression to Tevul Yom

To lay the groundwork for his suggestion, R. Lichtenstein draws our attention to a tevul yom, a person who has already gone to mikvah. While the immersion removes the impurity, the Torah mandated that s/he would not be fully tahor, fully restored to ritual purity, until evening. During this time, s/he must still avoid contact with terumah or kodashim, because any such contact would render them unacceptable to be eaten and they would have to be burnt.

We might be tempted to see that as saying that this person is at a lower level of impurity, R. Lichtenstein points out that a tevul yom has the same impact on terumah and kodashim. In the ordinary transfer of impurity, terumah is one level up from kodashim, but not in the case of a tevul yom (R. Danny Wolf, who wrote the comments on the bottom to these shiurim, points out that Tosafot in Pesachim 14b cites the view of Ri that terumah rendered a shelishi by a tevul yom would in fact not affect kodesh within which it came into contact).

The tevul yom has an impact on these items that does not seem to fit our usual framework. Similarly, mParah 8;7 notes that in general, anything that invalidates terumah (renders it impure enough to be burnt) makes liquids into a rishon, a first-level tumah, except for tevul yom.

In that exceptional status of the tevul yom, R. Lichtenstein will find room to support the av/toladah view of how ritual impurity moves from one item to another.

His starting point is the Gemara’s several times applying the phrase טמא יהיה, he shall be impure, from Bamidbar 19;13, to a tevul yom. In what sense is the tevul yom still impure, when the immersion in a mikvah removes it? R. Lichtenstein suggests that halachah views a person both as a legal personality as well as a physical body. Tumah, ritual impurity, can affect either; by coming into contact with it, the person’s body itself acquires tumah and the legal personality becomes a tamei, a ritually impure person. When the verse says tamei yihyeh, s/he shall be impure, that means that for all that immersion in the mikvah removes the physical aspect of the impurity, the legal status remains until evening.

That leaves open the possibility (and I am eliding his discussion of various views in the Gemara, taking only the piece that will then inform the way this could apply to the model of transference he is advancing) that a tevul yom doesn’t transfer impurity to the items with which s/he comes into contact. Rather, the contact with the tevul yom’s person, a person declared tamei by the Torah, renders terumah or kodashim prohibited to be eaten and obligates burning them. (He notes the Gemara’s citing the verse of והבשר אשר יגע בכל טמא, which speaks of sanctified meat having contact with any impurity—it’s not necessarily that the meat becomes tamei, it’s that the contact has ramifications).

Back to Avot and Toladot

Tevul yom as an example of where contact with ritual impurity has an impact separate from the idea of transfer allows for a similar claim about how a sheni, a second level of impurity, if it’s just the result of contact with a toladah, could nonetheless impact terumah.

Once we know of another halachic area where contact with impurity affects sanctified items such that they have to be burnt, we can offer that as a possibility for sheni as well. While it can’t transfer tumah, since its own impurity came from a toladah without the strength to create further toladot, it might still be true that sanctified items that come into contact with it are affected, and can no longer be used for their sanctified purposes.

At a simple content level, R. Lichtenstein has expanded our understanding of how tumah and taharah might work. Certainly in the case of a tevul yom, the model that that person is as a legal matter tamei despite all the physical impurity having been removed by immersion, the tevul yom’s impacting sanctified items by contact not by transference is an enlightening expansion of our understanding (and a tip of the hat to R. Shmuel Hain, who reminded me of this discussion of R. Lichtenstein’s).

His then working to see if that can fit with the question of how a second level impurity creates a third level one, even as he repeatedly admits that there’s a simpler model out there, all based on a discussion I could have imagined dismissing as technical, are part of what made him who he was, a man who worked to embrace the fullness and richness of the Torah in all its possibilities, always wondering which of those hitherto overlooked possibilities might deepen and enhance our understanding of Torah.