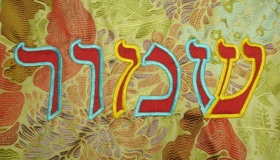 It is often said that within the Aseret HaDiberot lay many of the foundations of the Jewish religion, and of ethical monotheism more generally. While that is no doubt true about the content and even its delivery, it may be surprisingly true about the form in which it was delivered as well.

I. In One Statement

There is much discussion about the fact that Shabbat is ordained with the positive term, zachor, in its original presentation in the Book of Shemot and with the negative term, shamor, in the Book of Devarim. Rashi quotes the Mechilta to tell us that these two opposites were both said together. Although the intention here may well be that the two statements were actually said at the same time, the cited midrash continues to give other examples of God commanding two opposites which were not given at the same time, such as the prohibition against shatnez and the mitzvah of tzizit or the mitzvah of yibum and the prohibition against marrying a brother’s spouse. And yet, the rabbis maintain that these too were given ‘bedibur achat’ (together). So even if ‘zachor’ and ‘shamor’ were said at the same time, it appears that the rabbis also mean something else by that over here. To understand it, let’s take a closer look at Ramban (on Shemot 20:8).

In line with many other classical commentators, Ramban points out that we can expect there to be differences between the first report of the Aseret HaDiberot in Shemot and its second report in Devarim. Ramban attributes this to the allowance that God gives Moshe to follow his own manner of expression in writing Devarim, so long as it doesn’t change its essential meaning. And that is why, what we are dealing with in the case of ‘zachor’ and ‘shamor’ cannot be attributed to a change on the part of Moshe. And so, following the Mechilta, the only way to account for this major change would be to attribute both versions to God Himself, even if their implications seem contradictory. And it is at this point that the rabbis give a list of other sets of commandments that seem to contradict each other but, nonetheless, were all clearly given by God. The reason for these examples is to show that we should not be discouraged from accepting that both ‘zachor’ and ‘shamor’ were given by God, since this is His way.

But we should not yet think that we have fully grasped what the rabbis are after here. For the above midrash continues to tell us that saying these type of commandments is something that only God, and not people, can do. Were it only referring to saying to two things literally at the same time, we could understand this fairly easily. The expression speaking out of two sides of one’s mouth is an expression that can’t be taken literally for obvious reasons. And since God doesn’t speak through a mouth, he doesn’t face the same limitations that people do. But this does not appear to be the meaning of the midrash. Rather, the midrash says that it is the seemingly contradictory legislation that people are not capable of composing. Why not?

Perhaps a clue may be found in a careful reading of Ramban, who asks the very interesting question, “What was actually written on the tablets?” Ramban seems to take for granted that ‘zachor’ was written on the second set and that the reason Moshe only said ‘shamor’ in the Book of Devarim was to remind them of what else was originally said at Mount Sinai. No explanation is given why that should be the case, but to make sense of the verse in Devarim, Ramban apparently feels forced to say that the extant set of tablets and Moshe’s later pronouncement complement one another. According to that, however, nothing forces us to say that the first set of tablets only had this one expression, and so Ramban proceeds to ask about just that. While it is read otherwise by others, I am convinced that Ramban then tells us that it is likely that both expressions were written on the first set, and it is only in the second set that ‘shamor’ was taken out. [1]See Chavel (especially the English translation) and Lev Yerushalayim who read Ramban as saying that both sets were the same and only included ‘zachor’. Yet such a reading is difficult, since … Continue reading

But it is more than a careful reading of Ramban that makes this the preferred understanding. From the time of the rabbis, there has been much written about the more ethereal and miraculous first set to tablets as compared to the second set. It is generally understood that the reason for the difference is rooted in the different audiences. The first set was meant for the Jews before they had sullied themselves with the idolatry connected with the golden calf. As such, the Jews who actually received the second set were on a much lower level than they had been before the incident. It easily follows that having ‘shamor’ and ‘zachor’ together also represents a higher level, given that “it is something that only God can do.” As such, we would readily expect it to be on the first set and not on the second. It would be there as part of a host of qualities that we might call supernatural. And understanding our view of these qualities more generally may help us to finally understand the midrash.

As Ramban points out elsewhere, the difference between the natural and the supernatural is actually ephemeral for believers in a God that is, not only all-powerful, but also willing to show that He is not bound by the natural course of events that He has set into place. [2]Ramaban on Shemot 13:16. Yet this is not to deny that there are important differences. And perhaps the most important variable in defining the supernatural is our lack of ability to comprehend it: A believer can accept that it happens, but even he cannot explain how it happens. It would appear that the notion of contradictory commandments is the same. We can all accept that they can be commanded but we cannot explain how they can be commanded.

Apparently, however, some sense of how they could be commanded was comprehensible enough to the intended audience of the first tablets. Yet by the time of the second tablets, it had once again become incomprehensible. At that point, the message of having these two words together simply didn’t work, and so the Jews had to settle with something that they could more readily understand.

The ability to accept both sides of apparent contradictions was clear to the rabbis and is exhibited by the Mechilta above, as well as by many other rabbinic statements including the famous Talmudic statement of ‘elu ve’elu’. Yet accepting this is not the same as understanding it. From the midrash we have just discussed, we see that such an ability was even beyond the rabbis. [3]See my discussion of this in an earlier article in Torah Musings entitled “How Many Moshes Can There Be?” and, especially, footnote 5.

Yet that may not have always been the case. With the possibility that the first set of tablets included both ‘zachor’ and ‘shamor’ comes the possibility that our ancestors once (almost?) attained that very special ability to understand the true nature of paradox. Perhaps it come to them as a result of seeing God’s hand so directly in history and of becoming privy to an understanding of God that included the Song at the Sea and, even more powerfully, revelation itself.

But this understanding need only be a thing of the past. In fact, the notion of unifying apparent contradictions from a higher, more holistic perspective is a constant theme in the writings of Rav Kook. For him, such a vision was a part of the pre-messianic return to the land of Israel and to a renewal of the Jewish creative genius. Perhaps his hopes were premature. On the other hand, I wonder if the world and Western society in particular, has not reached an impasse that will only be overcome by such a completely new way of thinking. Though apparently not completely new, since it may well have been the way of the first tablets.