The Making of a Lonely Man 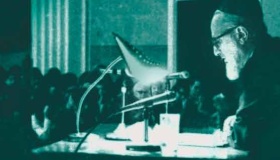 The Making of a Lonely Man: The Posthumous Profile of Rabbi Soloveitchik

by Zev Eleff [1]I offer my thanks to Melissa Eleff, Isaac Ehrenberg and Noah Greenfield for their helpful suggestions to improve this essay.

In 2008, Noah Greenfield posed a provocative question: “Was the Rav a Tsaddik?” [2]Noah Greenfield, “Was the Rav a Tsaddik?: In Search of Modern Orthodox Saints,” Kol Hamevaser 1 (February 27, 2008): 3. The writer did not doubt that Rabbi Joseph B. Soloveitchik was a most righteous person. [3]Unfortunately, that this was merely a question about the Rav’s legacy and not a statement about his conduct was missed by at least one subsequent critic. See Rabbi Aaron Rakeffet-Rothkoff’s … Continue reading Still, it was striking to Greenfield that he was unaware of evidence that could prove that conviction. Surely, he reckoned, someone with his background should have been informed of the Rav’s magnanimity. Greenfield graduated from YULA High School in Los Angeles, studied at Yeshivat Har Etzion (Gush) and enrolled at Yeshiva College. All three institutions are pathways to the Rav’s teachings. “While I have read many of the Rav’s writings, studied under many of his students, and heard and read countless stories about him,” explained Greenfield, “I still have no idea if the Rav was a tsaddik.” [4]Noah Greenfield, “Was the Rav a Tsaddik?,” 3. If his Orthodox community did not extol the virtues of its most esteemed rabbinic figure then, he wondered, perhaps the women and men who claimed membership to that enclave did not value those qualities in their own lives.

The whole matter is a complicated one. On one hand, Greenfield’s claim was something of an overstatement. The Rav’s righteousness was in plain view just as his followers began to construct their master’s posthumous legacy. Rabbi Soloveitchik died in April 1993. Shortly afterward, Yeshiva University held a memorial service to honor him. In the weeks that followed, YU provided a prominent evening forum for the Rav’s disciples to share their “Torah” and “stories” of their beloved teacher. [5]See “Teachings of the Rav: Something for Us to Remember,” The Commentator (April 28, 1993): 2. Of course, Rabbi Soloveitchik was recalled as a masterful Talmud scholar and, along with his wife, Dr. Tonya Soloveitchik, as a founder of Maimonides School. The Rav was more than an educator, however. One memoirist recalled the focus on the Rav’s benevolence at those lectures in Washington Heights:

In the period after the Rav died, I was struck by how much of the eulogizing of the Rav took place through storytelling. There were wonderful anecdotes about his charming relationship with first-graders in Maimonides; his concern for one of his shamashim (aids) who was going out on a date but didn’t have the proper socks; his hesed toward the Irish Catholic housekeeper who had fallen on bad times, and about his hosting a party for a chambermaid at Yeshiva University. [6]David Shatz, “Memorializing the Rav: Time and the Masorah,” in Memories of a Giant: Eulogies in Memory of Rabbi Dr. Joseph B. Soloveitchik zt”l, ed. Michael A. Bierman (Jerusalem: Urim, 2003), … Continue reading

The hagiographical literature also includes many stories of the Rav’s kindness. Collections of recollections produced by the Rabbinical Council of America, Young Israel and the Rabbi Joseph B. Soloveitchik Institute all included memories of the Rav’s generosity and morality. [7]See Rabbi Joseph B. Soloveitchik: Man of Halacha, Man of Faith, ed. Menachem D. Genack (Hoboken: Ktav, 1998); “Harav Yosef Dov Halevi Soloveitchik: A Rosh HaYeshiva and Manhig who Inspired … Continue reading According to my count, more than seventeen contributors to these volumes chronicled these attributes of their sainted teacher. Later on, a few dozen rabbis and leaders wrote essays on the Rav that appeared in a special series hosted in the Yeshiva College newspaper, which I expanded in book form. [8]See Mentor of Generations: Reflections of Rabbi Joseph B. Soloveitchik, ed. Zev Eleff (Jersey City: Ktav, 2008). Once again, I counted another ten chapters that delved into the virtuous character of the Rav.

In addition, one story published in another memorial detailed a most inspiring instance of the Rav’s charitableness. Since then, it has gained considerable traction. The tale was canonized by Joseph Telushkin in his Code of Jewish Ethics and included in a popular documentary on the Rav’s life. [9]See Joseph Telushkin, A Code of Jewish Ethics: You Shall Be Holy, vol. I (New York: Bell Tower, 2009), 289-90; and Lonely Man of Faith: The Life and Legacy of Rabbi Joseph B. Soloveitchik, DVD, … Continue reading To my knowledge, it was first recounted in detail by Rachel Wiederkehr about her brother:

When my brother, Ezra, was 16, he was diagnosed with Hodgkin’s disease. It was about the same time the Rav’s wife became ill with lymphoma, and he would call my parents weekly to see how Ezra was doing. After graduating from Maimonides, Ezra became a Talmid in the Rav’s shiur at YU, and the Rav kept up with every detail of my brother’s illness. Ezra was undergoing chemotherapy then, though at YU nobody except the Rav knew he was even sick. Once, a chemotherapy appointment meant that Ezra would have to leave shiur early. Aware that my brother’s departure would arouse the curiosity of his classmates, the Rav dismissed the entire class early that day so that Ezra would not feel conspicuous, and so that his secret remain safe. [10]June Glazer, “Glimpses of the Rav,” YU Review (Winter 2003): 6. For more on Ezra Lightman, see Zev Eleff, Living from Convention to Convention: A History of the NCSY, 1954-1980 (Jersey City: … Continue reading

However, while the facts do not agree with Greenfield, the sentiment of the literary corpus probably does. The tales of the Rav’s kindness appear secondary to his scholarly attainments. In fact, other episodes that depict a far fiercer Rabbi Soloveitchik rise above the rest. [11]See Aryeh A. Frimer and Dov I. Frimer, “Women’s Prayer Services—Theory and Practice,” Tradition 32 (Winter 1998): 41; and Norman Lamm, Seventy Faces: Articles of Faith, vol. 1 (Hoboken: Ktav, … Continue reading Among the hundreds of published tributes that memorialize the Rav, just one eulogist devoted his entire remarks to the Rav’s kindness. In contrast to other memoirists who focused on Rabbi Soloveitchik’s towering intellect and leadership, Abe Levovitz of Boston chose instead to focus on the “Rav’s human qualities.” [12]Abraham Levovitz, “The Rav’s Human Qualities Invoke Indelible Memories,” in Memories of a Giant, 229-235. Originally delivered before a synagogue audience, Levovitz stressed to his listeners that he wished to “paint a slightly different pictures of this man among men.” To him, it was most important to share Rabbi Soloveitchik’s “humanity, his love, his forgiving nature, his nobility, his aristocracy, his charity, and above all, his human frailty.” [13]Ibid., 235.

Levovitz’s portrayal of the Rav’s forthcoming forgiveness was particularly poignant. In 1941, a number of Boston Jews slandered the Rav. They accused him of operating a kosher meat racket. In the end, Judge Abraham Cohen acquitted Rabbi Soloveitchik of all charges. To Levovitz, this was no surprise. What astonished him was that the Rav forgave his Orthodox rabbinical foes and went to certain lengths to help them in their times of need. [14]See Seth Farber, “Reproach, Recognition and Respect: Rabbi Joseph B. Soloveitchik and Orthodoxy’s Mid-Century Attitude Toward Non-Orthodox Denominations,” American Jewish History 89 (June … Continue reading In addition, the Rav issued a pass to the well-heeled, Massachusetts-based Feuerstein clan who had powered the assaults on Rabbi Soloveitchik in Boston as well as in New York. [15]See Zev Eleff, “Freedom and Responsibility: The First Orthodox College Journalists and Early Yeshiva College Politics, 1935-1941,” American Jewish Archives Journal 62 (December 2010): 72-81.

The Rav was not the only one who harnessed this supreme skill. Much earlier in the twentieth century, Rabbi Avraham Yitzhak Kook endured vitriolic attacks on his labors in the Holy Land. His rivals accused him of concocting works of “sorcery” that “turn light to darkness and darkness to light.” [16]See Yehudah Mirsky, Rav Kook: Mystic in a Time of Revolution (New Haven: Yale University Press, 2014), 168. Similar to Rabbi Soloveitchik after him, Rav Kook did not respond to the assailants. They burned his book but the Zionist ideologue said nothing in retort. Likewise, Rav Kook forgave his rivals and offered them aid when his opponents required his support.

In all probability, individuals familiar with Rav Kook are not surprised by this. There exists a softer side of Rav Kook that is nearly absent in Rabbi Soloveitchik’s posthumous profile. Perhaps that sturdier—or, more expansive—legacy that Rav Kook enjoys is a reason that he can be invoked on so many matters within Israeli religious life.

In contrast, the Rav’s foremost status is that of a Torah scholar and dynamic educator. True, he wrote far less for later generations to examine than Rav Kook. Yet, it is also certainly the case that America’s Orthodox Jews cast the Rav as an intellectual monolith without much reach into some of the more mundane matters of everyday Jewish life. He is the “Lonely Man” after all, somewhat aloof and unintelligible to ordinary people. He is not quite grounded enough to aid the rest of us who cannot access his high-level rabbinics or highfalutin English. [17]Of course, much of Rav Kook’s Hebrew writing is esoteric and “highfalutin” in different ways than the Rav’s essays. Still, many of the topics included in Rav Kook’s literary corpus deal … Continue reading

He did not assume this role, of course. Rather, Rabbi Soloveitchik’s disciples and devotees stressed these scholarly and philosophical features in order to construct religious communities that might appropriately match those emphases. Decades ago, the enclaves that viewed the Rav as a “symbolic exemplar” needed a spiritual godfather of outmatched intellectual ability and pedagogical vision. [18]On the term “symbolic exemplar,” see Jack Bloom, “The Rabbi’s Family,” Central Conference of American Rabbis 86 (1976): 105-14. Forces to the left and right questioned the credibility of these religious communities and Rabbi Soloveitchik offered the middle-ground an elegant, legitimate response. No doubt, it helped that the hoisted role model was someone who also exhibited good moral character but this was rarely the most poignant point to stress.

In April 2013, dozens of Jews (mostly men) ascended pulpits and podiums to publicly remember Rabbi Soloveitchik on the occasion of the twentieth anniversary of his death. In the United States and Israel, the Rav’s followers recalled their master as they had in previous forums. Few offered fresh insights and virtually every speaker and writer underscored the Rav’s scholarship rather than his fine character. I could not help but think that we missed a chance to breathe new life into this very Lonely Man of Faith.