The Dayan and Da’as Mikra 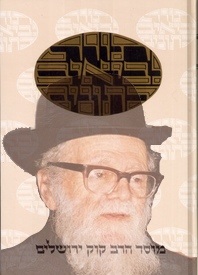 The relationship between the towering Torah giant, R. Shaul Yisraeli, and the Da’as Mikra commentary on the Bible is religiously significant and, according to a brief biography in a recently published book, somewhat complex. R. Yisraeli was, at various times in his life, rosh yeshivah of the Merkaz HaRav yeshivah, dayan of the top religious court in Israel, founder of the Eretz Hemdah kollel for Religious Zionist dayanim and member of the Chief Rabbinate’s rabbinic council. While known as a world-class halakhic expert, he was a broad individual, with interests ranging across the Torah spectrum, including philosophy and Bible. He even published a high school textbook on Jewish philosophy, still in print (Perakim Be-Machasheves Yisrael).

Da’as Mikra is the series of biblical commentary published by Mossad HaRav Kook. While strictly Orthodox, the commentary includes new discoveries in history, archeology and literary studies. Potentially explosive in the Orthodox community, this series includes an editorial board of distinguished scholars, including R. Yisraeli. The names of the editorial board members involved in each book are published at the beginning of each volume.

R. Eliezer Melamed’s Revivim: Gedolei Yisrael Ve-Anshei Mofes contains biographies of rabbinic and other notable figures often absent in the broader Orthodox community. Among them is R. Yisraeli, whom R. Melamed knew personally. Within this biography, R. Melamed discusses R. Yisraeli’s role with Da’as Mikra (p. 110). R. Yisraeli took his position on the editorial board very seriously. According to R. Melamed, R. Yisraeli reviewed the draft of each volume carefully before publication and provided the author with detailed notes. He often pointed out sources in midrash for explanations that were otherwise thought to be new. And if the author ignored R. Yisraeli’s comments, he repeated them in the next round of review out of his feeling of responsibility for the important undertaking.

Particularly interesting is R. Melamed’s statement that R. Yisraeli objected to the publication of a Da’as Mikra commentary on the Pentateuch. He felt that the Five Books of Moses should be studied with traditional commentaries, not new approaches. I checked and, indeed, his name does not appear in those books. As R. Melamed explains, R. Yisraeli withdrew from involvement in the preparation of those volumes. Therefore, his name, implying his approbation, do not appear on them.

Regular readers of this website know that I occasionally quote non-traditional commentaries on the Torah. Apparently, R. Yisraeli would not approve of this practice. It is not clear to me whether his objection applied to everyone, including scholars, or just to lay enthusiasts who are the primary audience of Da’as Mikra.