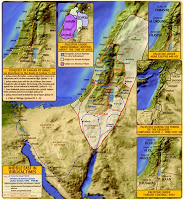 A review of some of Gaza’s glorious Jewish history is certainly in order considering the current events in Israel today. Unfortunately, many people formulate passionate opinions on the political issues without ever having visited Gaza, nor having any knowledge of its history. Examining the biblical borders of the Land of Israel as promised to the Jewish people, one will readily notice that the borders include the area known as the â€œGaza Strip.â€[1] The Torah records that the ancient inhabitants of Gaza were the Avvites, a nation no longer living,[2] making Gaza one of the oldest inhabited cities.

Click here to read moreJewish settlement in Gaza began with the tribe of Yehuda, who received that area as part of their tribal allotment in the division of the Land of Israel.[3] Of course, the Philistines also lived in that area, which played a focal role in the life of Samson and Delila,[4] particularly Samsonâ€™s infamous suicidal destruction of the Temple of Dagon, named for a Gazan fish god. It seems that indigenous Gazans never liked the Jews.[5]

Like the entire Land of Israel, Gaza â€œenjoyedâ€ its share of conquerors such as the Ptolemies, Assyrian Seuclids, and King Herod, among others. Gaza flourished as a Jewish center throughout the Roman and Byzantine eras, and was a place of regular pilgrimage along with other noteworthy cities of the time. Rulers and empires always sought Gaza due to its location between Asia and Africa, its fertile land, and its value as a seaport. Trade was always a major source of income.

In 635 CE, Arabs overthrew the Byzantines, and Gaza City served as a capital of the Negev. Jewish life was fruitful under Arab rule. Of course, the Crusaders eventually discovered Gaza as well and soon thereafter devastated its Jewish community. It is recorded that in the fourteenth century there were sixty Jewish families living in Gaza, many of whom worked in wine production. The famous Mishnaic commentator Rabbi Ovadia of Bartenura visited Gaza in 1488 and met with Gazaâ€™s chief rabbi, an immigrant from Czechoslovakia. Under the Ottomans, Jewish life in Gaza was flourishing and prosperous.

Historically, Jewish life was full of amenities there, including synagogues, yeshivot, and rabbinic courts. By 1641, even the Karaites maintained a synagogue in Gaza. Rabbi Israel Najara, author of the famous â€œKah Ribonâ€ Shabbat song, was chief rabbi of Gaza during the seventeenth century. It was in Gaza that the false messiah Shabbtai Tzvi picked up his largest following. Napoleon also arrived for a visit in 1799. Jewish life in Gaza (including Gaza City) continued until the pogroms of 1929, at which time the Jewish residents left for safer cities. In modern times, Gaza was occupied by Egypt at the end of Israelâ€™s War of Independence. In 1967, Israel won control of Gaza as a result of the Six-Day War.

It was none other than the Egyptian Department of Antiquities in 1965 that discovered Jewish mosaics along the Gaza seashore, as well as in the vicinity of the Great Mosque of Gaza. There is also evidence that synagogues once thrived all over the area. After 1967, Israeli archeologists continued excavating areas of Gaza and found further signs of ancient Jewish life. The Talmud also mentions its sages who lived in Gaza.[6]

Regardless of one’s political views, make no mistake â€“ from the historical and biblical perspective, Gaza is as much a part of the Promised Land of Eretz Yisrael as any other.

“He Who blessed our forefathers Abraham, Isaac, and Jacob, may He bless the soldiers of Tzahal and all the security forces”.