The Differences of Dignity 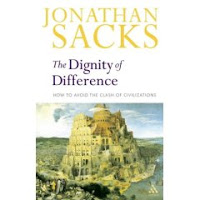 Chief Rabbi Sir Jonathan Sacks has published a new book, The Home We Build Together: Recreating Society. See here for excerpts: I, II and here for reviews of this new book: Times, Guardian, Totally Jewish. The last begins with a brief discussion of the controversy surrounding Rabbi Sacks’ 2002 book, Dignity of Difference: How to Avoid the Clash of Civilizations. After a confrontation with the beis din of Manchester, R. Sacks revised his book for a second edition.

See here for Marc B. Shapiro’s article on this issue and the ban on R. Nosson Kamenetsky’s Making of a Godol.

Below are the revisions to the book’s controversial third chapter after a comparison of the original and revised editions. It is possible that I have missed a few minor differences but I believe I have found almost everything. Text in parentheses is only in the original edition and text in brackets is only in the new edition. In order to fully understand the context of these changes, one has to have a copy of the book.

I see, in general, four kinds of changes:
1. Slight changes to avoid an unintended implication that religion is bad
2. Removing unnecessary references to issues of evolution and prehistory
3. Revising his use of the word “faith” to mean religion in general rather than religious belief, which some might have found confusing
4. Softening his claim that other religions are divine communications

This last claim of his is not new in this book, because it also appeared in his book Radical Then, Radical Now (=A Letter in the Scroll). He prefaces it with the statement that it is radical, and then argues that not only is there some truth in every religion — which is obvious because a religion that teaches that it is good to honor one’s parents already has one element of truth in it, and almost certainly many more. He suggests that God has given those religions to other nations intentionally, although I am not sure whether he means through actual prophecy or simply through divine guidance. The latter claim has a source in the Rambam (Mishneh Torah, Hilkhos Melakhim 11:11).

The former, though, if that was R. Sacks’ intent, is quite shocking. The sources escape me right now, but there are three views within Chazal about when prophecy ceased among the Gentiles but all agree that it was around the time of Moses. However, there is precedent for saying that the end of Jewish prophecy around the time of the destruction of the First Temple was not absolute and there are exceptions. Perhaps this can also be said about Gentiles. In which case R. Sacks is not contradicting any Chazal but merely making a radical proposal, which is after all exactly what he said he was doing. I don’t see anything heretical about it, merely unique and, frankly, not very convincing.

In conjunction with the publication of the revised edition of the book, R. Sacks posted sources to his website on related topics (link). None, I believe, fully provide precedent for this radical view.

P. 46: The first recorded act of religious worship is (leads directly to) [directly followed] by the first murder, the first fratricide.

P. 46: I read this as a clear and fateful warning, at the very beginning of the book of books, that just as there is a road from faith to redemption, so there is a path from [the misuse of] religion to violence.

P. 46: The sense of belonging goes back to the (prehistory, to the hunter-gatherer stage in the evolution of mankind, when homo sapiens first emerged) [dawn of humanity, when being part of the group was essential to life itself].

P. 52: Babel â€“ the first global project â€“ is the turning point in the biblical narrative. [From then on, God will not attempt a universal order again until the end of days.] It ends with the division of mankind into a multiplicity of languages, cultures, nations and civilizations.

P. 53: God, the creator of humanity, having made a covenant with all humanity, then turns to one people and commands it to be different, (teaching humanity to make space for difference. God may at times be found in human other, the one not like us.) [in order to teach humanity the dignity of difference.] Biblical monotheism is not the idea that there is one God and therefore one (one truth, one faith, one way of life.) (gateway to His presence.) [On] (To) the contrary, it is the idea that (unity creates diversity. That is the non-Platonic miracle of creation.) [the unity of God is to be found in the diversity of creation. This applies to the natural world.] What is real and the proper object of our wonder is not the (quintessential) [Platonic form of a] leaf but the 250,000 different kinds there actually areâ€¦

P. 54: (The same applies to civilizations.) The essential message of the (Book of Genesis) [Hebrew Bible] is that universality â€“ the covenant with Noah â€“ is only the context of and prelude to the irreducible multiplicity of culturesâ€¦

P. 54: There is a difference between physis and nomos, description and prescription, nature and culture(, or â€“ to put it in biblical terms â€“ between creation and revelation)

P. 56: God as we encounter Him in the Bible is not simply a philosophical or scientific concept: the first cause, the prime mover, (initiator of the Big Bang) [necessary being]. He is a parent(, sometimes male) {‘Have we not all one father?'(}, sometimes female {)’Like one whom his mother comforts, so will I comfort you’}(, but always) bearing the love that a parent feels for a child he(/)[or ]she has brought into being.

P. 56: He is a particularist, loving each of his children for what they are: Isaac (and) [but also blessing] Ishmael, [favouring] Jacob (and) [but also commanding his children not to hate those of] Esau, Israel and the nations, (choosing one for a particular destiny, to be sure, but blessing the others, each in their own way) [the God ‘whose tender care rests upon all his works’].

P. 56: (God no more wants all faiths and cultures to be the same than a loving parent want his or her children to be the same. That is the conceptual link between love, creation and difference. We serve God, author of diversity, by respecting diversity.) [Just as a loving parent is pained by sibling rivalry, so God asks us, his children, not to fight or seek to dominate one another. God, author of diversity, is the unifying presence within diversity.]

P. 60: The (supreme religious) challenge [to the religious imagination] is to see God’s image in one who is not in our image.

P. 60: The God of Israel is larger than the (faith) [specific practices] of Israel.

P. 60: (Judaism was born as a protest against empires) [[Judaism has historically been a living alternative to empires], because imperialism and its latter day successors, totalitarianism and fundamentalism, are attempts to impose a single (truth) [regime] on a plural worldâ€¦

P. 64: Yes, humanity is capable of great acts of altruism (and self-sacrifice), but it is also constantly at war.

P. 64: (Truth on the ground is multiple, partial. Fragments of it lie everywhere. Each person, culture and language has part of it; none has it all.)

P. 64: (Truth on earth is not, nor can it aspire to be, the whole truth. It is limited, not comprehensive; particular, not universal.) [The divine word comes from heaven but it is interpreted on earth. The divine light is infinite but to be visible to us it must be refracted through finite understanding. Truth in heaven transcends space and time, but human perception is bounded by space and time.]

P. 65: The way I have discovered, having listened to Judaism’s sacred texts in the context of the tragedies of the twentieth century and the insecurities of the twenty-first, is that the truth at the beating heart of monotheism is that (God is greater than religion; that He is only partially comprehended by any faith. He is my God, but also your God. He is on my side, but also on your side. He exists not only in my faith, but also in yours.) [God transcends the particularities of culture and the limits of human understanding. He is my God but also the God of all mankind, even of those whose customs and way of life are unlike mine.]

P. 65: Only such a God would be truly transcendent â€“ greater not only than the natural universe but also than the spiritual universe capable of being comprehended in any (one language, any single faith) [human language, from any single point of view].

Pp. 65-66: It would be to know that I am a sentence in the story of my people and its faith, but that there are other stories, each written by God out of the letters of lives bound together in community, (each bearing the unmistakable trace of his handwriting) [each part of the story of stories that is the narrative of man’s search for God and God’s call to mankind].