All Go Up To Jerusalem 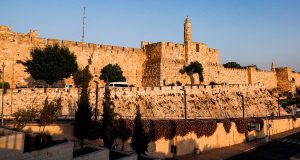 END_OF_DOCUMENT_TOKEN_TO_BE_REPLACED

R Yitzchok Tendler / It comes as no surprise that America’s writers and poets of the 19th century touched heavily on Biblical themes. They were, after all, overwhelmingly Christian. Far more surprising, and scarce, are instances of their references to Rabbinic Literature. In this regard, a relatively obscure short story by Edgar Allan Poe, A Tale of Jerusalem, stands entirely in a league of its own. The breadth of familiarity with Rabbinic Literature and Temple protocol, the extent to which this narrative is so replete with abstruse Talmudic references, is, frankly, astounding. Poe goes far beyond mere Talmudic reference; he actually adopts its idiom and syntax, employing free use of Hebrew and Aramaic to color his characters.