The OU Is Right: Orthodox Women Shouldn’t Be Rabbis 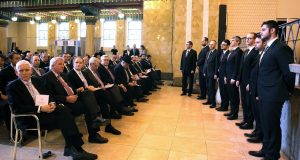 by R. Avi Shafran Most of a rabbi’s roles can be halachically and effectively assumed by women, and have been for many years. A rabbi must be learned in Jewish texts and the practical laws pertaining to daily Jewish life — and Orthodox women’s seminaries teach thousands of young Jewish women those laws, and do a top-notch job of it ...

END_OF_DOCUMENT_TOKEN_TO_BE_REPLACED

Symposium on the Ethics of Brain Death and Organ Donation: VII

Rabbi Avi Shafran / Internal organs are most successfully transplanted when “harvested” from a ventilated patient, whose blood remains oxygenated and circulating. From the perspective of halacha, or Jewish religious law, that raises a serious question and, in its wake, ethical dilemmas. A diagnosis of “brain death” – when tests indicate that a person has suffered irreversible cessation of all brain function – is considered by contemporary medicine and secular law to be sufficient to constitute death, thereby permitting the removal of organs. In cases involving medical matters, scientific realities play an important role in the deciding of halacha. But Jewish law’s rules, judgments and definitions do not necessarily parallel those either of medical science or society. Machines and observations can measure electrical activity in the brain and “invoked potentials”; but the determination of when a soul has left a body is something less easily calibrated. To an observant Jew, halacha alone serves as the determinant.