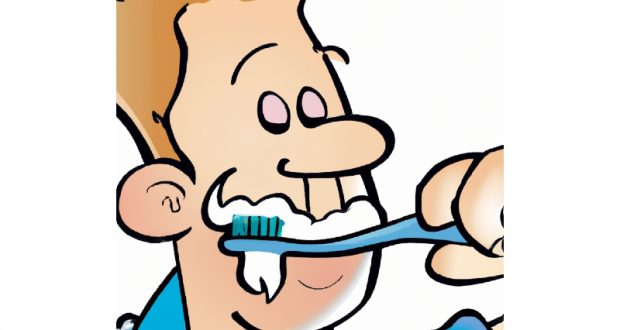 There are two main issues in brushing teeth on Shabbos — using a toothbrush and using toothpaste. It is, of course, possible to brush with a toothbrush but without toothpaste or with toothpaste on one’s finger without a brush. As we will see, twentieth century halakhic authorities debated whether any of these options are allowed.

As always, follow your family custom and/or ask your local rabbi.

There are a few potential halakhic problems with using a toothbrush on Shabbos. The first is whether one may use a dry toothbrush because it can cause bleeding, which is prohibited on Shabbos. Therefore, brushing with a toothbrush should be forbidden unless one is fairly certain that it will not cause bleeding. This is the position of the Minchas Yitzchak (3:48, 50). However, the Seridei Esh (2:28) argues that one has to differentiate between an action that will definitely cause a forbidden result, which is a pesik reisheih and is forbidden, and an action that might cause a forbidden result, which is permitted. For example, Shulchan Arukh (Orach Chaim 303: 27) forbids brushing one’s hair because the brush will definitely pull out hair but Rema allows one to brush with one’s fingers because that does not necessarily pull out hair. For most people, brushing teeth does not always cause bleeding and is therefore permissible like brushing one’s hair with one’s fingers.

Another issue is using water on a toothbrush. The concern is that brushing with a wet toothbrush causes the water to be squeezed out, and squeezing (sechitah) is prohibited on Shabbos. The Minchas Yitzchak (ibid.) accepts this reason. Rav Moshe Feinstein (Iggeros Moshe, Orach Chaim 1:112) merely writes that it is best to be concerned for this position. The Seridei Esh writes that there is no issue of squeezing for a few reasons. First of all, the nylon bristles of a toothbrush do not absorb water so the prohibition is only on a rabbinic level, like hair (Shabbos 128b). Therefore, the inevitable act of “squeezing” during brushing is a pesik reisheih on a rabbinic prohibition which, the Seridei Esh says, is permitted based on Magen Avraham (253:1). Rav Chaim Regensburg (Mishmeres Chaim, no. 9) points out that the Magen Avraham cannot mean what the Seridei Esh claims it means because elsewhere (314:5) he quotes this position in the name of the Terumas Ha-Deshen and argues against it. Instead, Rav Regensburg suggests that in our case — which is a double rabbinic prohibition (squeezing a non-absorbent item in an indirect way (ki-l’achar yad) — everyone would agree with the Terumas Ha-Deshen.

Additionally, the Seridei Esh argues, there are two types of prohibited squeezing on Shabbos: squeezing that is a subcategory of extracting (mefarek) and that is a subcategory of cleaning (melaben). This distinction is widely acknowledged. When squeezing as an act of cleaning, it doesn’t matter that the water is subsequently unused because regardless of that the cleaning was still done. However, when squeezing as an act of extracting, the discarding of the water is significant and renders the act permissible (Shulchan Arukh, Orach Chaim 230:18). When brushing teeth, the water is not used to clean the toothbrush and is quickly discarded. Therefore, it should be permissible.

There is a further reason to permit and that is the case of a sponge. One may not use a sponge because of squeezing, unless it has a handle (Shabbos 143b). Rashi and Rambam explain that the handle enables a user to utilize the sponge without squeezing out water. However, Ra’avad explains that even if one squeezes with this kind of sponge, it is permissible for a different reason. The Seridei Esh points out that according to Ra’avad, you may use a toothbrush with a handle. However, the Minchas Yitzchak disputes his understanding of the Ra’avad based on a Chazon Ish.

The Seridei Esh cites the case of a towel (Shabbos 40b) that is permissible to use. We are not concerned about potential squeezing because, as the rishonim explain, if so we would refrain from all washing on Shabbos. Just like most people cannot handle being unable to wash at all on Shabbos, so too they cannot handle being unable to brush their teeth on Shabbos and therefore we should permit using a toothbrush. Rav Regensburg points out that the two cases are different in that the towel is only about allowing regular use and being unconcerned with potential squeezing while with the toothbrush the regular use is the squeezing.

Rav Regensburg points out that we permit something that is prohibited by a double rabbinic prohibition (shevus di-shevus) when there is great public need (Shulchan Arukh, Orach Chaim 307:5). The public, he argues, has a great need to brush their teeth and therefore the double rabbinic prohibition of squeezing a non-absorbent item in an indirect way should be permitted.

Rav Moshe Feinstein (Iggeros Moshe, Orach Chaim vol. 1 no. 112) writes that it is forbidden to use toothpaste on Shabbos because it consists of the labor of smoothing (memachek). When someone quoted this to Rav Joseph  B. Soloveitchik during class, Rav Soloveitchik responded that he didn’t think Rav Feinstein fully understood the labor of smoothing. A student then suggested that perhaps Rav Feinstein meant the spreading (memarei’ach) sub-category of smoothing, to which Rav Soloveitchik responded that if so, he didn’t think that Rav Feinstein fully understood the sub-category of spreading (Nefesh Ha-Rav, p. 168).

Rav Soloveitchik explains the categories of smoothing and spreading by considering a rough surface that one wishes to smooth. One can sand it down, which would be smoothing (memachek). Or one can spread plaster over it to fill in the grooves and create a smooth surface on top, which would be spreading (memarei’ach). Brushing teeth with toothpaste conforms to neither of these descriptions. This is also the way that Rav Chaim Regensburg (Mishmeres Chaim, no. 9) and Rav Ovadiah Yosef (Yabi’a Omer, vol. 4 Orach Chaim 27:2) explain the prohibition.

When brushing teeth, one uses the toothbrush, toothpaste and water to remove dirt/plaque from on top of the teeth without removing (sanding down) anything from the teeth. It therefore does not fall under either smoothing or spreading. However, it could be suggested that one is spreading toothpaste on top of the teeth before spitting it out with the dirt. Rav Regensburg answers that brushing is not a careful spreading but a forceful brushing and no smooth layer is created on top. There is a rabbinic prohibition of spreading that applies to spreading thick honey (Shabbos 146b), which would seem similar to toothpaste. However, the application of toothpaste to teeth is so temporary, because it is quickly rinsed off, that it cannot be called spreading at all.

The Tzitz Eliezer (7:30:8) counters that there is no minimum time requirement for spreading and therefore even spreading the toothpaste for a moment is prohibited. Rav Ovadiah Yosef adds a postscript to his multiple responsa (or long responsum) on this subject in which he notes the positions of a number of his contemporaries, including the Tzitz Eliezer, and states that he does not find their arguments convincing.

There are a few other potential issues, such as doing a “weekday activity” (uvdin de-chol) and cleaning a toothbrush after use as a form of forbidden preparing for after Shabbos. Most authorities dismiss the former, although RV Chaim Na’eh (Ketzos Ha-Shulchan, vol. 7 p. 99) accepts it. And while RAV Moshe Feinstein adopts the latter simply, Rav Ovadiah Yosef dismisses the preparation as minor (see Yalkut Yosef, Shabbos vol. 326:13 n. 27) but nevertheless forbids washing off a toothbrush after use because there is no longer a need and one should therefore be strict on the issue of squeezing due to cleaning. There is also a potential issue of molid by turning the semi-solid toothpaste into foam and liquid, but this is almost unanimously dismissed by authorities.

The following is an admittedly non-comprehensive list of positions on this subject: