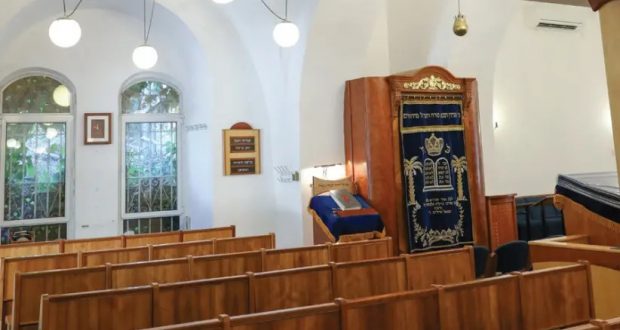 Taking Over as Chazan after Yishtabach

Question: I was supposed to take over as chazan at Yishtabach, but I absentmindedly said Yishtabach quietly as the previous chazan was finishing Az Yashir. I quickly asked him to say Yishtabach and Chatzi Kaddish, after which I took over. Was this appropriate?

Answer: There were a few potential options to consider (besides telling your friend to continue), which we will evaluate and compare.

Your apparent assumption that Yishtabach leads straight into Kaddish has some basis. The Shulchan Aruch (Orach Chayim 53:1) instructs the chazan to stand by the amud before Yishtabach so he can go straight into Kaddish (see Mishna Berura 53:1). However, the connection is more between P’sukei D’zimra (which Yishtabach concludes) and Kaddish than Yishtabach itself, as the following halacha illustrates. When there is an acute need to speak in the midst of Shacharit, which is permitted between Yishtabach and Kaddish, it is necessary to recite a few p’sukim of P’sukei D’zimra to justify the upcoming Kaddish (Rama, OC 54:3). Although the break was long enough to divorce that which preceded the break from Kaddish, it is permitted, necessary, and sufficient to say some p’sukim and not to repeat Yishtabach.

Even to the extent that there is some importance to connecting specifically Yishtabach to Kaddish, the important thing is probably the tzibbur’s connection, irrespective of this chazan’s recitation. We see this, to a great extent, when a new chazan starting at Ashrei recites Kaddish (Titkabel) on a different chazan’s chazarat hashatz (see Divrei Sofrim, Yoreh Deah 376:103). There was even a minhag, cited and approved of by the Rav Pe’alim (II, OC 14), that after the chazan finishes Yishtabach, mourners (even one who did not say Yishtabach) recite Chatzi Kaddish.

The Pri Megadim (EA 52:1) posits that, classically, a chazan recites out loud all of Yishtabach, which enables people to be yotzei with him. The Chelek Levi (OC 31) says that our chazanim, who start at “Berachot v’hoda’ot …,” do not serve as full chazanim with all their halachot. One application of this distinction relates to the halacha that when a chazan is replaced in the middle of tefilla, the new chazan must go back to the beginning of the unit (Shulchan Aruch, OC 126:2). In theory this applies to the berachot of Kri’at Shema, but the Mishna Berura (59:29) points out that nowadays when everyone davens for themselves, the chazan functions more as a pace setter than a real chazan and he does not need to go back. So too here, we do not use a halachic chazan for Yishtabach. For all of these reasons, you could have and should have either started with Kaddish without ending off Yishtabach again or had your friend finish Yishtabach and you recite Kaddish. (The first way would have made it easier to avoid speaking to explain yourself, at a time when speaking is permitted only for special needs.)

Let us now analyze what you apparently assumed, i.e., that making a switch between Kaddish and Barchu is better because they are not as connected as Yishtabach and Kaddish. We saw that Kaddish relates to P’sukei D’zimra. In contrast, we repeat Barchu for those who missed even when not preceded by Kaddish. On the other hand, Kaddish and Barchu are quite linked. Classically, Kaddish goes with Barchu (see Shulchan Aruch, OC 69:1). Also we prefer to speak when critical between Yishtabach and Kaddish rather than between Kaddish and Barchu (Rama, OC 54:3; see the hesitation on the matter in Darchei Moshe, OC 54:1). In short, it was unnecessary and slightly unfortunate to do the switch after Kaddish, but you did not ruin anything.

You were right not to wait until after Barchu. The Beit Yosef and Darchei Moshe (to OC 69) disagree to what extent Barchu with its response is self-standing. Although it is not unanimous (see Sdei Chemed, vol. VII, p. 337), there is reason to look at Barchu as the beginning of Yotzer Ohr, making it a less logical time to switch. However, due to the chazan’s limited functionality at these points, this too would not have ruined anything.