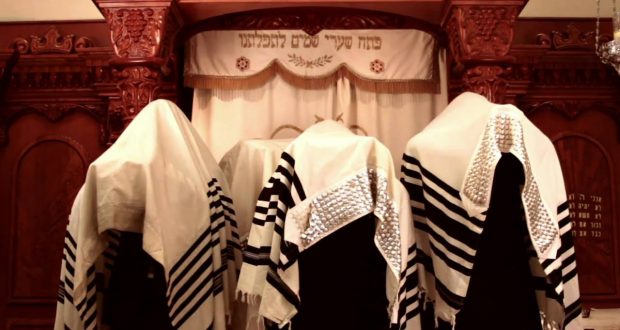 The Torah commands kohanim, male descendants of the priestly families, to bless other Jews while raising their hands and reciting a specific formula, i.e. to dukhen, to do Nesi’as Kapayim. “Speak with Aharon and with his sons, saying: In this way you shall bless the children of Israel; you shall say to them…” (Num. 6:23). For reasons that are not completely clear, Ashkenazim outside of Israel only do this on holidays. It seems from this verse that only kohanim may dukhen. We see this explicitly from a Gemara about lineage.

How much proof does a kohen need to possess to be considered a verified descendant of Aharon (a blue-check kohen)? Even in the times of the Mishnah, over a thousand years after Aharon died, it could not have been easy to have a family tree going back that far. The Gemara (Kesubos 24b) suggests different options. If you can trace your lineage to a kohen who served in the Temple, that is sufficient. If you can trace your lineage to someone who ate terumah, that also works. And if you can trace your lineage to someone who did Nesi’as Kapayim, that verifies you as a kohen. Why? The Gemara explains that it is a violation of a positive commandment for a non-kohen to dukhen. Rashi (ad loc., s.v. de-isur) explains that the positive commandment is from the verse above (Num. 6:23), that the kohanim should do the blessing and not anyone else.

However, a statement by R. Yossi complicates things. The Gemara (Shabbos 108b) quotes R. Yossi as saying that even though he is not a kohen, if his friends tell him to go up to dukhen, he does what they say. How could R. Yossi do that in violation of the positive commandment? Further complicating things, Tosafos (ad loc., s.v. ilu) quotes Ri (12th cen., France) as saying that he does not know of any reason why a non-kohen may not dukhen, except reciting an unnecessary blessing. What about the positive commandment?

Later commentators and authorities offer a number of ways to reconcile the positive commandment mentioned in Kesubos, R. Yossi’s behavior mentioned in Shabbos, and Ri’s seeming lack of awareness of the problem. Rav Moshe Isserles (Rema; 16th cen., Poland; Darkei Moshe, Orach Chaim 128:1) suggests tentatively that the positive commandment is only a barrier if there are no kohanim. A Yisrael or Levi may not go up alone and do Nesi’as Kapayim. However, if kohanim already are going up to bless the people, a non-kohen may join them. He even quotes an anonymous text that suggests it is good for a non-kohen to join the kohanim because of the general rule be-rov am hadras melekh, there is more glory to God with a larger group. It is beautiful when a large group says the blessings together. However, both in Darkei Moshe and in his gloss to Shulchan Arukh (ad loc., par. 1), Rav Isserles concludes with tzarikh iyun, this requires further study.

Rav Avraham Gombiner (17th cen., Poland; Magen Avraham, Orach Chaim 128:2) questions Rav Isserles’ distinction between a non-kohen saying the blessing on his own and with others. From where does this distinction emerge? Rav Gombiner suggests that perhaps this is what Ri means when he says that there is a problem of an unnecessary blessing. This unnecessary blessing is the positive commandment mentioned in Kesubos. Rav Yechezkel Landau (18th cen., Czech; Noda Bi-Yehudah, vol 1, Orach Chaim, no. 6) discusses whether Rav Gombiner’s reference to an unnecessary blessing means the blessing before doing Nesi’as Kapayim (“asher kideshanu bi-kdushaso she Aharon…”) or the actual Nesi’as Kapayim itself. He concludes that it probably means the latter, reciting the blessings contained in the biblical verses. Rav Ovadiah Yosef (Ma’or Yisrael, Shabbos 118b) asks how there could be a problem reciting an unnecessary blessing by saying biblical verses. Anyone can say a full verse with God’s name.

Rav Gombiner (ibid.) offers another resolution between the two Gemara passages, setting aside Ri’s comment in Tosafos. Perhaps R. Yossi went up to dukhen, in deference to his friends, but just stood there silently so as not to violate the positive commandment that only kohanim may bless the people in that way. Rav Yoel Sirkes (17th cen., Poland; Bach, Orach Chaim 128) says something similar. He suggests that R. Yossi, under pressure from his friends, would go up to dukhen where he would say just the biblical verses of blessing but without the preceding blessing (“asher kideshanu…”) and, significantly, without lifting his hands in blessing. Rav Avraham Shmuel Binyamin Sofer (19th cen., Hungary; Responsa Kesav Sofer, Orach Chaim, no. 13) takes the same approach. A kohen only fulfills the mitzvah if he lifts his hands while reciting the blessings. That is why it is called Nesi’as Kapayim. As long as a Yisrael or Levi does not lift his hands, he is not fulfilling the mitzvah and therefore not violating the positive commandment. Rav Sofer suggests that this is why the Gemara in Shabbos says that R. Yossi went up to dukhen while the Gemara in Kesubos discusses tracing lineage based on Nesi’as Kapayim. Anyone may say the blessings (dukhen) but only a kohen may do it with raised hands (Nesi’as Kapayim).

III. Maybe a Yisrael May Dukhen

Rav Gombiner suggests a third explanation of the conflicting Gemara passages. There is a recurring debate throughout the Talmud whether women may voluntarily lean on the head of a sacrifice (e.g. Rosh Hashanah 33a). Men who bring an animal are obligated to lean on it. R. Yehudah holds that since women are not obligated to lean on it, they are forbidden to do so. R. Yossi and R. Shimon hold that leaning is optional for women. Rav Gombiner suggests that the same debate applies to Nesi’as Kapayim. Since R. Yossi holds that women may lean on a sacrifice if they want, he also holds that a non-kohen may recites the blessings if he wants. The Gemara in Shabbos follows R. Yossi and the Gemara in Kesubos follows R. Yehudah. Rav Yitzchak Nunez Belmonte (18th cen., Turkey; Sha’ar Ha-Melekh, Hilkhos Shabbos 19:23) points out that the Gemara in Kesubos invokes R. Yossi within the discussion of proving kohen lineage from Nesi’as Kapayim. If R. Yossi holds that a non-kohen can do Nesi’as Kapayim, then there is no room for this discussion. This seems to rule out this approach.

As an aside, Rav Barukh Epstein (20th cen., Russia; Torah Temimah, ch. 6 n. 131) quotes a textual variant to the Gemara in Shabbos. In that variant, R. Yossi says that even though he is not worthy (kedai rather than kohen), if his friends tell him to go the dukhen then he does. Rav Epstein suggests that in this version, dukhen refers to the podium. In other words, even though R. Yossi feels he is unworthy, if his friends ask him to speak publicly he agrees to do so. This makes the passage completely unrelated to Nesi’as Kapayim. Clearly, Tosafos, Ri and most others did not have this textual variant.