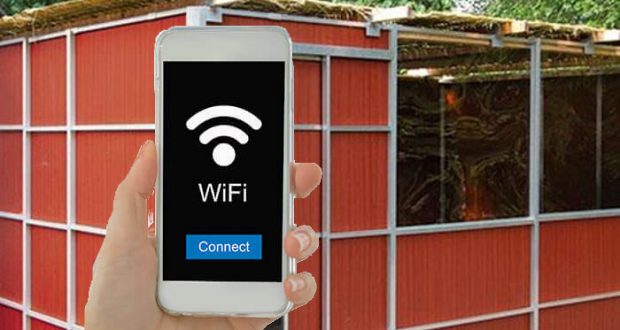 Does a Sukkah Need WiFi for WFH?

I. A Usable Sukkah

A sukkah needs to be usable. Rav Moshe Isserles (Rema, 16th cen., Poland; gloss to Shulchan Arukh, Orach Chaim 640:4) writes that a sukkah in which you cannot do certain basic things is an invalid sukkah. For example, if you cannot sleep in a specific sukkah, then it is invalid for all uses and you may not eat in it either. Presumably, this would invalidate most sidewalk sukkos that restaurants put up in city business districts, where it is quite dangerous at night. However, Mishnah Berurah (ad loc., 20) quotes some authorities who disagree and allow such a sukkah. According to Rema, does a sukkah today need WiFi?

I ask this because many people cannot take vacation from work for all of Sukkos. They have to work on some or all of Chol Ha-Mo’ed. However, particularly since the changes to work habits caused by Covid, many people will work from home during Sukkos. Do they need to work in their sukkah? If they do, they probably need WiFi in their sukkah so they can work. If so, a lack of WiFi might raise questions about the validity of the sukkah of someone who needs to work on Chol Ha-Mo’ed, at least according to Rema.

Are you allowed to work in your sukkah? Throughout the holiday, you are supposed to live in the sukkah and go through all your usual activities as if it was your house. However, you must maintain the holiness of the sukkah, for example by removing garbage and dirty dishes. Rema (ibid., 639:1) says that you should not do any disrespectful activities in the sukkah. Mishnah Berurah (ad loc., 2) quotes Rav Ya’akov Moelin (Maharil, 15th cen., Germany; Sefer Maharil, Hilkhos Sukkah, no. 19) who says that if you want to chat with a friend, you should converse in the sukkah. Similarly, Rav Ya’akov Weil (15th cen., Germany; Responsa, no. 191) says that if you want to play a game of dice (presumably in a permissible way), you should play in the sukkah. Mishnah Berurah then quotes Rav Yeshayahu Horowitz (17th cen., Germany-Israel; Shelah) who says that you should minimize your mundane conversation in the sukkah. Ideally, you should only discuss Torah matters in the sukkah but you certainly should avoid forbidden talk like gossip. Which is correct? Should you do all your talking in the sukkah or just Torah matters? What about work? Should you work in your house rather than your sukkah, to maintain its holiness by avoiding mundane activity and conversation? Or should you work in your sukkah, if possible?

Rashi (Yoma 19b s.v. ve-lo) seems to define sichas chullin as childish, frivolous conversation. Similarly, elsewhere Rashi (Sukkah 28a s.v. sichas) defines it as frivolous and joking conversation. It seems reasonable that the Torah forbids this kind of meaningless chatter but why are Torah scholars having these conversations?

I believe that by applying Rambam’s classification of conversation we can clarify this issue. In his commentary to Avos (1:16), in the context of discussing the value of silence, Rambam (12th cen., Egypt) differentiates between five types of speech. Some words are obligations, like prayer and Torah study. Others are forbidden, like false testimony and slander. A third category is inadvisable, which includes meaningless stories and the denigration of specific attitudes and character traits. A fourth category is proper and includes praise of good behavior and attributes, and denigration of negative attitudes. Also within this category are stories about the righteous and denigration of the wicked. The fifth category is optional — details about life, food, business, etc.

The first category consists of words of Torah and blessings, obligatory talk. Everything else falls within the broad spectrum of sichas chullin. Presumably, when not engaged in obligatory talk, Torah scholars focus on proper talk and occasionally dip into neutral talk about money and business — two of the five categories. For example, Rav Chisda is described as giving practical life advice which is neutral but still valuable (Shabbos 82a). We benefit by studying the way Torah scholars talk within these two categories because, aside from the relevant content, we learn how to speak in a refined way (Rashi, Avodah Zarah 19b s.v. sichas).

We do not need a positive commandment to teach us not to say forbidden speech like slander. Rather, the commandment must be telling us to avoid the category of frivolous, meaningless speech, as Rashi teaches in Avodah Zarah. Of Rambam’s five categories, one is obligatory (not sichas chullin), two are positive or neutral forms of sichas chullin, one is prohibited explicitly and the final category is sichas chullin that is forbidden by this positive commandment. Similarly, Rav Avraham Gombiner (17th cen., Poland; Magen Avraham 156:2) quotes this commandment as forbidding “insulting matters and lightheadedness.”

IV. Work in a Sukkah

What is allowed in a sukkah and what is forbidden? It seems that the category of sichas chullin that constitutes frivolous speech and behavior, such as playing dice, is allowed but discouraged. If you are going to do them on Sukkos, you should do them in a sukkah. The worst type of sichas chullin, that of forbidden speech, defiles the sanctity of a sukkah and may not be said inside one. This includes being careful not to allow forbidden images, words and songs into your sukkah. However, the middle category, that of neutral speech, seems completely allowed in a sukkah. While Shelah recommends speaking only obligatory or praiseworthy speech in a sukkah (the two highest categories), if you need to discuss business (the middle category), you should do it in a sukkah.