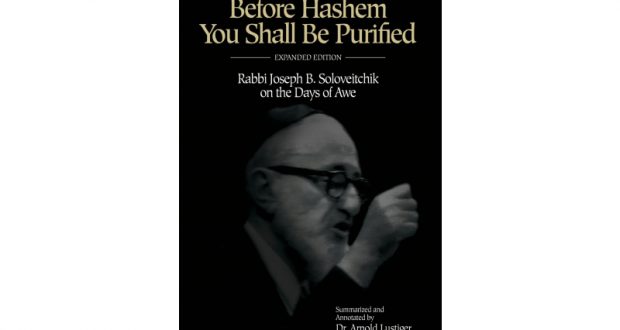 Book review of: Before Hashem You Shall Be Purified: Rabbi Joseph B. Soloveitchik on the Days of Awe (Expanded Edition)
Edited by Dr. Arnold Lustiger
OU Press, 205 pages

Rabbi Joseph B. Soloveitchik (henceforth, the Rav) spoke in a majestic manner that captivated listeners for hours at a time. He dissected complicated halachic subjects in an exciting and dramatic way, offering personally meaningful rationales to familiar concepts while explaining textual difficulties. In particular, the Rav’s annual teshuvah lectures to the Rabbinical Council of America, which he gave for over 20 years, unraveled the complex themes of the Yamim Nora’im, the Days of Awe, in mesmerizing ways. He continually explored the complex psychological and halachic depths of teshuvah.

In 1974, R. Pinchas Peli published Al Ha’Teshuvah, in which he summarized many of the Rav’s teshuvah lectures through 1972 (translated into English in 1984 as On Repentance). Al Ha’Teshuvah enthralls its readers. It is a combination of lomdus and hashkafah, analytical Talmudic study and Jewish thought. Peli, a poet, wrote soaring essays in an attempt to capture the Rav’s style. I cannot say whether he succeeded in that but he definitely succeeded in conveying the beauty and the depth of the Rav’s teachings on the all-important topic of teshuvah. However, the Rav continued saying teshuvah lectures until 1980. Al Ha’Teshuvah is missing important material.