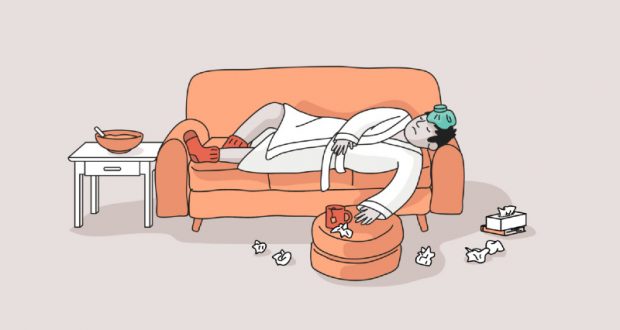 The Torah requires us to take care of our health but few people do this vigilantly. Most people take small risks, eat moderately unhealthy foods frequently, exercise too little and otherwise insufficiently care for our health. We are too busy, too stuck in our ways and too easily tempted. These are normal risks that most people take. If someone becomes sick due to this kind of neglect, we view it as unfortunate and beyond his control. He was living his life normally and is not to blame.

However, what if someone clearly bears the blame for his illness? If he knowingly and willingly acted in a way that made him likely to get sick, his illness is his fault. For example, if someone enters a hospital ward for contagious diseases without wearing any protective gear. Do we blame him for his illness? And if so, does he lose the privileges of someone who is sick? Rav Ya’akov Emden discusses this in one of his glosses to the Talmud.

The Gemara (Eruvin 29b) says that you should not eat an unripe onion stalk because of its toxins. R. Chanina ate one and became very sick. His colleagues prayed for his recovery because “the time needed him.” Setting aside the general issue of Talmudic medicine and the specific issue of definitively identifying the toxic vegetable, it seems that R. Chanina ate the onion even though he knew it was toxic.

Rav Ya’akov Emden (18th cen., Germany; Glosses, ad loc.) asks why the Gemara tells us that R. Chanina’s colleagues prayed for him because “the time needed him.” Shouldn’t they have prayed for him even if he was not needed? R. Emden says that no, because his illness was self-inflicted, they should not have prayed for him. It was his fault and he has to bear that burden.

This surprising ruling by Rav Emden has a contemporary equivalent. In October 2020, when Israel was suffering from a serious spread of Coronavirus, one specific individual was repeatedly asked and warned by his friends to wear a mask but he refused. A rabbi specifically told him that if he does not wear a mask and gets sick, the rabbi will not pray for recovery. Within short order, the man got seriously sick from the virus. Should the rabbi pray for the sick man?

Rav Yitzchak Zilberstein (cont., Israel; according to this article) answered that if the sick man was completely health previously, then the rabbi is not required to pray for his recovery. The sick man inflicted himself and bears the blame. While Rav Zilberstein does not cite any sources, the above comment by R. Emden seems like a fitting precedent.

However, after this ruling by Rav Zilberstein was publicized, Rav Asher Weiss (cont., Israel; in this article) disagreed. Rav Weiss quotes two answers to Rav Emden’s question. According to Ritva (14th cen., Spain; Commentary, ad loc.), by eating the toxic onion, R. Chanina violated the words of the sages. It was for this reason that his colleagues otherwise would not pray for him. According to R. Emden, it was because R. Chanina endangered himself. Rav Emden’s reason applies to someone who did not wear a mask and caught Coronavirus; Ritva’s reason does not apply. It follows that according to Ritva we should pray for someone who negligently caught Coronavirus, while according to Rav Emden we should not. Additionally, perhaps all the other commentators that did not address this issue implicitly — with their silence — felt there is no problem with praying for someone who is sick with a self-induced illness.

I’m not sure I understand Rav Weiss’ point regarding Ritva. Ritva does not claim that R. Chanina violated a rabbinic prohibition. Rather, he acted contrary to the words of the sages who said not to eat this dangerous food. Similarly, someone who failed to wear a mask in a dangerous situation violated the words of the leading rabbis of our time who encouraged caution in following medical advice during the height of the pandemic. I do not see the distinction.

On the other hand, Rav Shmuel Eidels (Maharsha, 17th cen., Ukraine; Commentary, ad loc.) answers the question differently. He says that R. Chanina’s colleagues prayed for his recovery because this was R. Chanina Ben Dosa, whose prayers for others were particularly effective. They needed him to recover so in the future he could protect people with his prayers.

More recently, Rav Yosef Chaim of Baghdad (19th cen., Iraq; Ben Yehoyada, ad loc.) offers multiple explanations for the prayers on behalf of R. Chanina “the time needed him.” Perhaps that was simply how his colleagues phrased their prayers on behalf in order to emphasize his righteousness. In other words, the Talmud is not explaining why they prayed on his behalf but how they did so. Or perhaps the colleagues were saying that even if his time was up, he had lived through his pre-ordained years, the world needs him to continue living. Or maybe the needs of the time is a reference to prayer itself, as the Gemara (Shabbos 10a) refers to prayer as the life of the times, temporary life (chayei sha’ah), in contrast to the eternal life of Torah study.

The passage about R. Chanina lends itself to multiple interpretations. Rav Ya’akov Emden’s explanation is not the only possibility and therefore there is room to say that we should pray even for those who brought sickness onto themselves through reckless behavior.

Another consideration relates to the discussion about whether someone who put his life at risk can say the blessing of Gomel on being saved. Many argue that he should not recite the blessing (see our discussion here). Rav Azriel Hildesheimer (19th cen., Germany; Responsa, Orach Chaim 29:10) writes that someone who attempted suicide but miraculously survived should recite the blessing. Among other considerations, he says that this person probably repented. Therefore, whatever sin led to the situation has been removed through repentance. Presumably someone who got sick due to his negligence and became seriously ill regrets his actions.

2022-07-04
Gil Student
Previous: Daily Reyd
Next: The Prohibition of Intermarriage