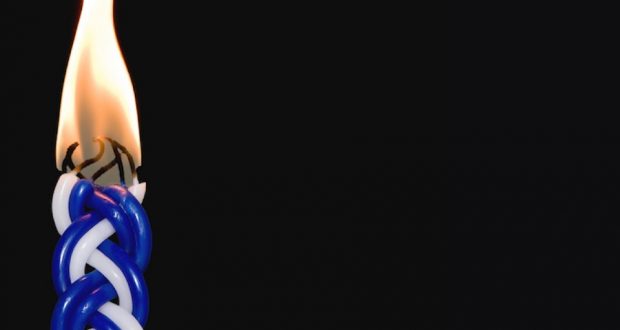 Havdalah separates between the sanctity of Shabbos and the regular nature of the week. We must observe the prohibitions of Shabbos until we say Havdalah. Additionally, we may not eat until we recite Havdalah on a cup of wine or its equivalent. When Tisha B’Av falls or is observed on Saturday night through Sunday, we go straight from Shabbos into the fast. If we fail to say Havdalah, we cannot perform any of the forbidden labors. But because of the fast, we cannot drink wine or anything at all.

One option is to recite Havdalah before sunset. In that way, you can say it on a cup of wine — although you cannot light a candle. Another option is to recite Havdalah at night and give the wine to a child to drink. Rabbeinu Asher (Rosh; 14th cen., Germany-Spain; Ta’anis, ch. 4, no. 40) quotes Bahag who rejects the possibility of saying Havdalah before sunset because once you say Havdalah, you accept Tisha B’Av, begin the fast immediately and cannot drink the wine. Instead, Bahag recommends delaying Havdalah until Sunday night, when Tisha B’Av is over and you can drink wine and eat a meal after Havdalah. Before then, immediately when Shabbos is over, you should say the Havdalah passage in the prayers or recite the blessing of “Barukh ha-mavdil bein kodesh le-chol” (without God’s name). This passage or blessing allows you to perform forbidden labor after Shabbos is over, although you must still recite Havdalah on a cup in order to eat.

Rosh quotes Ramban who rejects the proposal to say Havdalah on Tisha B’Av night and give the wine to a child to drink. We are concerned that children will get confused and later in life, as adults, will drink Havdalah wine on Tisha B’Av. Rather, Ramban says that since we cannot say Havdalah at the proper time, we are exempt from the requirement and do not need to say Havdalah on a cup at all.

Rosh follows Bahag, that we say Havdalah on a cup after Tisha B’Av. His son concludes likewise in Tur (Orach Chaim 556) and Shulchan Arukh (ad loc.) rules accordingly. All agree that you must recite the Havdalah passage in prayers or the blessing when Shabbos is over so you can perform otherwise forbidden labor on Tisha B’Av. Additionally, you recite a blessing on fire after Shabbos is over, on Tisha B’Av, and do not recite a blessing on spices at all, even after Tisha B’Av.

All this addresses the Havdalah problem from the perspective of someone fasting on Tisha B’Av. What about someone who for some reason does not fast?

Rav Chaim Yosef David Azulai (Chida, 18th cen., Israel; Birkei Yosef, Orach Chaim 556:2) quotes Rav Chaim Benbeniste (17th cen., Turkey) who rules that someone who is not fasting on Tisha B’Av due to illness should recite Havdalah on a cup of wine or equivalent after Shabbos. Rav Ya’akov Chaim Sofer (20th cen., Iraq-Israel; Kaf Ha-Chaim 556:9) writes that you should wait to say Havdalah until you need to eat, even if it is later morning or afternoon. Chida (ibid.) also says that preferably you should say Havdalah on a cup of wine. However, Rav Shmuel Wosner (20th cen., Israel; Shevet Ha-Levi, 7:77) says that, if possible, you should say Havdalah on an acceptable beverage other than wine, such as beer or, according to Rav Yosef Shalom Elyashiv (21st cen., Israel; Kovetz Teshuvos 1:57), grape juice if beer is unavailable.

Rav Shlomo Zalman Auerbach (20th cen., Israel; quoted in Shemiras Shabbos Ke-Hilkhasah, ch. 52, n. 37) suggests that someone who will eat less than a minimum amount at a time (kezayis bi-khdei akhilas peras), should eat without saying Havdalah. However, he leaves this as an open question because he does not see any authorities mention this qualification.

In the last 150 years, the question was raised whether a child must recite Havdalah before eating on Tisha B’Av that is observed Saturday night through Sunday. It seems difficult to understand why an older child, who is fully capable of reciting Havdalah, would not. I believe that the first to suggest such an obligation is Rav Yehoshua Leib Diskin (19th cen., Israel; Responsa Maharil Diskin, Kuntres Acharon 5:72) and his reasoning is clear. Similarly, Rav Yekusiel Yehudah Halberstam (20th cen., Israel; Divrei Yatziv, Orach Chaim 2:243) rules that if a child can easily recite Havdalah, he must do so. Rav Shmuel Wosner (21st cen., Israel; Shevet Ha-Levi 7:77) defends this view although he later says that he is only explaining it, not agreeing with it (vol. 10, no. 177).

However, it seems strange that this obligation was never mentioned by authorities before the late nineteenth century. Every child in history has faced this situation multiple times. The omission is glaring. Rav Shlomo Zalman Auerbach (quoted in Shemiras Shabbos Ke-Hilkhasah, ch. 62 n. 105) says that since in general a child may eat before Havdalah, he need not say Havdalah on Tisha B’Av and may wait for his father to say it after the fast. Rav Moshe Sternbuch (cont., Israel; Mo’adim U-Zemanim 7:255) suggests a different approach. He quotes the Brisker Rav, Rav Yitzchak Ze’ev Soloveitchik (20th cen., Israel), as saying that the mitzvah to teach a child consists of training him to act as he would when he is an adult. Therefore, explains Rav Sternbuch, since when a child is an adult he will say Havdalah only after Tisha B’Av is over, he should do likewise when he is young.

2022-07-29
Gil Student
Previous: The Akedah: A Sacrifice and A Redemption for all time
Next: Daily Reyd