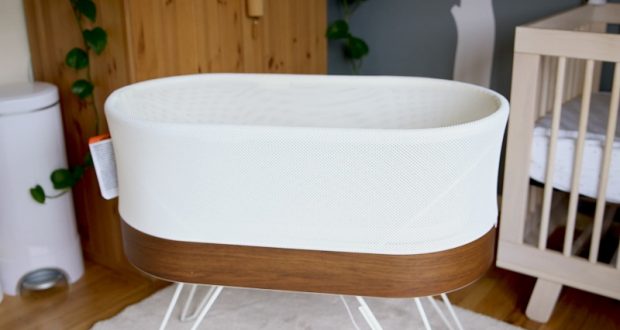 Question: There is a special bassinet that provides motion and soothing noise and reacts to an infant’s crying by intensifying them. Is it permitted to use this bassinet on Shabbat, and if so, are there special instructions?

Answer: [I researched the operation of a specific product but leave the parenting research to the parents.]

Presumably, you are asking about when you prepare the bassinet (including attaching the “sack”) so that you will not have to activate it on Shabbat. Several issues need addressing.

We assume (it is a broad subject) that activation of the change in the settings (as done by the crying) constitutes a Rabbinic-level violation of Shabbat. The baby himself is not culpable for anything, but is his parent guilty of causing him to do something forbidden? An adult must not feed (literally or figuratively) even a young child something that is forbidden (Yevamot 114a). However, he may put him in a situation where he will likely choose to do the violation on his own (ibid.). Our case is both better and worse than that case. On the one hand, the infant is not fundamentally violating Shabbat because his lack of cognizance of any connection between his instinctual crying and the change to the bassinet (see Shut R. Akiva Eiger I:8; Living the Halachic Process VI, C-11 regarding using diapers with disintegrating forms).

However, since the infant is not acting with cognizance, when an adult puts him in the situation in which he is expected to eventually cry and set off the change, we view the results from the adult’s perspective.  Since the significant action will occur later after being activated by something, we say that the adult acted through gerama (indirect action). (Regarding gerama completed by living things, see Bava Kama 59b; Har Tzvi, Tal Harim, Tzad 1). Violation of Shabbat through gerama is a very low-level violation of Shabbat, to the extent that it is permitted in certain cases of need (Rama, OC 334:22), and there is likely more room for leniency when the basic prohibition is only on a Rabbinic level (see discussion in Yabia Omer III, OC 17). There is thus room for need-based leniency when the serious needs of a child are involved (Rama, OC 328:17), but that is something that a rabbi needs to decide on a case-by-case basis, which we cannot do in this general presentation.

Even if one receives a lenient ruling, he must be careful. If the infant is crying or likely to do so as he is put into the bassinet, thereby activating the bassinet immediately, that is considered the parent acting directly regarding Shabbat (see Tosafot, Shabbat 17b), as is taking out a crying baby in a way that it will stop right away.

It is forbidden to play musical instruments on Shabbat, and for Ashkenazim this extends to instruments made for the purpose of making sounds (Rama, OC 338:1). This bassinet seems to fit the bill as designed for sound making. However, this will not be a problem here for two reasons. 1) The prohibition is probably only for direct noise making, not for setting a situation in which it will make noise in the future (Shemirat Shabbat K’hilchata 28:(65)). 2) The prohibition does not apply when the noise is made to help the sick (Mishna Berura 338:1), and since leniency is on the basis of the child’s significant need, this matter is also covered.

Another noise prohibition, avsha milta, applies even when nothing was done on Shabbat to cause it (e.g., putting grain in a mill soon before Shabbat) if people who hear it are liable to think that it was set up by melacha on Shabbat (Rama, OC 252:5). However, that is only for louder noises than the bassinet makes (Igrot Moshe, OC IV, 70.6).

In conclusion, we believe one could make the claim that leniency is called for, at least in case of need (to be discussed with one’s personal rabbi). However, leniency is not a foregone conclusion, especially because not infrequently the immediate activation of the mechanism will make its use outright prohibited. We await poskim to express their opinions on this quite new product.