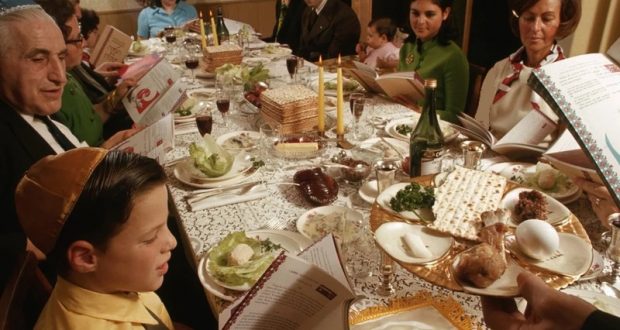 Who Reads the Haggadah?

Generally speaking, when it comes to the Pesach Seder, people know the details of their own family’s practices but not those of many other families. From conversation, they might know what different people eat for marror but not necessarily when they stand and sit, how they engage in conversation, in what format they conduct the Seder. In an informal survey, I have found three ways in which families read the Maggid section of the Haggadah. In some families, only one person reads the text — the Seder leader, usually a grandfather or father — and everyone else listens quietly and follows along in the text. In other families, the Seder leader reads the whole text while everyone else reads along together, albeit in a quieter tone. And in some families, people take turns reading from the Haggadah. This all reflects a halakhic debate.

However, the Gemara seems to imply only one of these practices. When discussing whether a blind man is obligated to say the Haggadah, the Gemara (Pesachim 116b) says that they asked the Rav Yosef’s students who said the Haggadah in his home and the students answered that Rav Yosef said it, even though he was blind. Similarly with Rav Sheishes, who was also blind. It seems to have been the practice that one person read the Haggadah for everyone at the Seder. Rashbam (ad loc., s.v. ke’ein) and Tosafos (Megillah 19b, s.v. ve-Rabbi Yehudah) say that Rav Yosef and Rav Sheishes were fulfilling the mitzvah for others (being motzi them).

This would imply that it is proper for the Seder leader to read the text while everyone else follows along silently. And, indeed, the Vilna Gaon (Ma’aseh Rav 191) and Rav Shneur Zalman of Liadi (Shulchan Arukh Ha-Rav 473:24) say that one person reads the Haggadah and fulfills the mitzvah for everyone listening. Rav Shneur Zalman offers a reason for the practice.

II. One For All

The general rule is that when people can fulfill a mitzvah together, that is better than each individual doing the mitzvah alone. “Be-rov am hadras melekh,” the King is glorified in a larger crowd. For example, all other things being equal, it is better to pray with a large group than a small group (Mishnah Berurah 90:28). Similarly, when multiple people need to recite a blessing, it is better for one person to say the blessing out loud and everyone else to listen and answer “Amen” than for everyone to say the blessing on their own (Mishnah Berurah 213:17). For this reason, Rav Shneur Zalman says that it is best for the Seder leader to read for everyone and fulfill the obligation for them while they listen.

Rav Avigdor Nebenzahl, in his Haggadah commentary (Yerushalayim Be-Mo’adeha, Pesach, pp. 56-57), says that those who observe this practice — that the Seder leader reads for everyone — should have intent (kavanah) for the reader to fulfill the obligation for (be motzi) those listening and the listeners to fulfill their obligation through the leader. But he also notes a different practice, in which everyone reads along quietly with the leader. If it is clear from the Gemara, commentators and codes that it is best for one person to read the Haggadah, why would this other practice emerge?

Rav Yosef Karo (Beis Yosef, Orach Chaim 183) quotes Medieval authorities who say that with long blessings, it is best for each person to recite the blessings along with the leader. Rav Tzidkiyahu Ha-Rofei (Shibbolei Ha-Leket 39) quotes Rav Avigdor who says this with regard to the grave after meals. Similarly, Rabbeinu Peretz (quoted in Orechos Chaim) says that everyone should recite the grace after the meal quietly because it is very hard to focus on someone else’s recitation of a long blessing. Rav Ya’akov Ben Asher (Tur, Orach Chaim 59) quotes a responsum by his father, Rabbeinu Asher (Rosh), that similarly even if the prayer leader says the blessings before Shema out loud, each individual should the blessings on their own because you cannot concentrate for so long on every single word that someone else is saying.

III. All For One

This would seem to be a good reason for everyone to read the Haggadah quietly with the Seder leader. Indeed, we find some authorities recommending this practice. Rav Shmuel Kamenetsky (Kovetz Halakhos, Pesach 26:18) says that despite the implications of the Gemara and later authorities, it is best for everyone to read the Haggadah along with the leader, although he does not explain why. In footnote 21, the editor quotes Rav Yosef Shalom Elyashiv who likewise recommends that everyone read the Haggadah. Perhaps their reasoning follow the above logic.

However, this was anticipated by the author of Seder Ke-Hilkhaso (quoted in Ma’aseh Rav, Jerusalem 1987 edition, sec. 191 n. 17). He offers to response to this objection. First, the Gemara (Megillah 25b) says that even though we normally say that people cannot hear two voices at once, Megillah is different. You can fulfill your obligation by listening to one of multiple readings going on at the same time because people enjoy it and can focus on a reading. Similarly, the same can be said about the Haggadah and therefore people can pay attention for a long time. Additionally, blessings have many parts that if you miss any of them, you do not fulfill your obligation. The Haggadah is different. You can miss almost all of it, you can space out or doze off, and still fulfill your obligation. Some parts are required but very few. Therefore, it is easy to pay attention to the bare minimum of the Haggadah. (Rav Nebenzahl, ibid., adds that even according to this practice, everyone should say Hallel on their own.)

Perhaps this second explanation also helps us understand the practice of those who take turns reading the Haggadah. If the reader fulfills the obligation for everyone, then it only has to be one reader at a time. Different people can read different passages to which everyone listens. But there is another issue. There is a view that women have only a rabbinic obligation to read the Haggadah while men have a biblical obligation (see Pri Megadim, Eshel Avraham 479:2). While others disagree about women, everyone agrees that a child has at most a rabbinic obligation. How can a woman (according to some) and a child (according to all) fulfill the obligation of the men at the table by reading the Haggadah? Based on the second answer, we can suggest that most parts of the Haggadah are not obligatory and if you miss them, you still fulfill your obligation. Therefore, perhaps it is best that a man (or the Seder leader) read the key Haggadah passages (Avadim Hayinu and Rabban Gamliel Hayah Omer) or that everyone read those passages quietly along with the main reader.

Rav Shmuel Kamenetsky (ibid.) adds another possible explanation. The nature of telling the story of the Exodus involves one person speaking and others listening. Perhaps this explains the custom of the Seder leader reading the Haggadah while everyone listens. This is an intriguing and worthy idea but I am not sure how to fit it into the language of commentators and codes that the leader fulfills the obligation (is motzi) those who listen.

Every family has their own ways of doing things. May we continue celebrating Pesach according to our family customs, while eating the korban Pesach in a fully rebuilt Jerusalem.