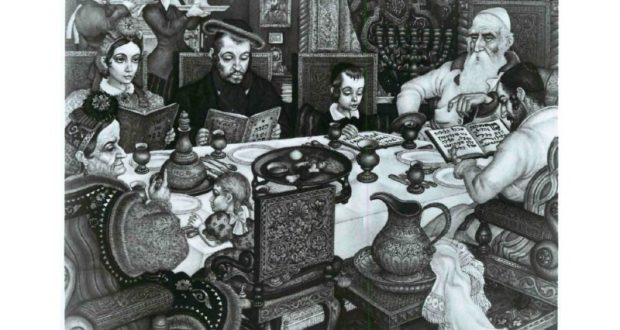 The Pesach Seder places the family, and specifically the relationship of parents and children, on center stage. The Haggadah’s section of the Four Sons makes clear that parents have a duty to respond individually to each child, but it must be with the same overall Exodus story. In this way, the Seder serves as the critical experience to form the Jewish identity of the next generation, which is the main vehicle for transmitting the Torah itself.

The passing of Torah from one generation to the next should never be taken for granted. Tanach is filled with stories of children rejecting the Torah values of their parents, whether our forefathers or the various Judean kings. The religious revivals of Hezekiah and Josiah lasted only their lifetimes and their children turned back towards idolatry as soon as they could. Rabbeinu Gershom and Rabbi Yisrael Lipkin of Salant had children who did not follow in their illustrious parents’ path. Rabbi Meir Soloveichik once quipped that if you want to know what God feels like, you should become a parent, since you will create beings who then do not listen to you.

That God places a critical emphasis on transmission is evident from Avraham. We are not told which virtues of Avraham led God to choose him, but we are told that Avraham’s ability to properly teach the ways of God to his family is central (Genesis 18:19). Even more surprising is the placement of transmission within the Exodus from Egypt story. The unfolding drama of Moshe’s powerful rhetoric, Pharaoh’s stubbornness, and the miraculous ten plagues is interrupted with a chapter and half about imparting the Exodus story. At three different points in that section (Exodus 12:26-27, 13:8, 14) Moshe explicitly addresses the importance of education- how parents should communicate the story of their salvation to their children. Only after Israel hears about the importance of teaching their children about God’s redemption, can the actual freedom take place. It is as if Israel’s ability to carry the Exodus story forward plays just as large a role as their new-found liberation.

So, how do we transmit a Torah life to our children?

Before discussing the successful teaching of Torah, we should look at properly transmitting morality and a philosophy of life as parallels.[1]It is not just the Torah that is concerned about enduring education, but ancient Greece asked this question about the teaching of virtue (Plato, Meno, 93-95). These are not really about knowledge, literacy, or competency. Students with excellent Torah knowledge may not be committed, just as some therapists have messy personal lives, or math wizzes misunderstand financial obligations. Not every Columbia Law School graduate manages to move into a successful professional role, despite numerous attempts. Transmission of these values is not about the techniques or skills that children learn, but something profound that enables the proper usage of knowledge towards a virtuous and flourishing life.

The main hurdle in teaching these deeper truths is that our children are distinct and different from us. They are unique. Parents supply the genetic material for their children, but the personality, talents, inclinations of their children are always a surprise and can be greatly varied nonetheless. Some of my children are as different as night and day. Some enjoy learning in school, some are deeply frustrated by it. Some ask in the box questions, while others insist that the framing itself be justified before moving on. Some are sensitive to stimuli and have intense emotions, while others are unfazed by smells, sounds, and insults. Distinctiveness means that parents cannot easily give over their understanding of life to their child, and even if they could, the child’s different set of talents and inclinations means that the parents’ approach will not match the child’s needs.

At the same time, children are also raw, and their personality and identity are not developed. Their natural selves need to be attuned to the requirements of the world around them. Students who struggle in school can learn strategies to succeed. Impatient individuals can learn to not tick people off, while maintaining their emphasis on efficiency. This stems from the power of human free choice, and it is in this space that parents play a critical role.

Parents guide children in their development by creating formative experiences for their children. It is specifically the individual’s memories of these experiences later on that provides lasting direction and constitutes effective education. (Teachers do this as well, though it is parents that have the primary obligation.) Memories of love, loyalty, betrayal, hard work, cutting corners, honesty, lying, and many others, guide choices and future actions. Without these memories, as in the case with amnesia, the person applies their natural tendencies in an unfiltered way. Erik Erikson describes this formed sense of self as the “ego identity” which “provides the ability to experience one’s self as something that has continuity and sameness, and to act accordingly.” It is memory that connects past, present, and future when it forms identity and directs the individual.

At the same time, numerous influences can also impact a child’s view of the world. Culture can play a large role, as can friends. Tragedy or trauma can make a searing impression. Parents must watch these other influences and assert their role to be significant players in this equation. Exposure to negative influences, whether friends, media, or the wider culture, especially earlier in life, can be significantly harmful to a child’s moral development. Parents must help their child navigate life’s disappointments and tragedies. In doing so, parents become central figures in shaping the worldview and longings of their children.

This process is not limited to moral instruction and life perspectives. The same principle holds true regarding religious instruction. Moshe asks about the proper method for transmitting Judaism when he says, “When, in time to come, your children will ask you, ‘What do these decrees, laws, and rules that the LORD our God has commanded upon you mean?’ (Deuteronomy 6:20),” his answer is:

you shall say to your children, “We were slaves to Pharaoh in Egypt and the LORD freed us from Egypt with a mighty hand. The LORD wrought before our eyes marvelous and destructive signs and portents in Egypt, against Pharaoh and all his household; and us He freed from there, that He might take us and give us the land that He had promised on oath to our fathers. Then the LORD commanded us to observe all these laws, to revere the LORD our God, for our lasting good and for our survival, as is now the case.

This answer is more surprising than it initially appears. Educators and parents today would likely answer a child’s question of “why observe Shabbat?” or “why eat only kosher?” with a discussion about the command’s usefulness or vision. They might learn a section of the Sefer HaChinuch or Moreh Nevuchim with the child. Some teachers might try to inspire their students towards greater religious commitment, with a kumzitz or engaging religious activity, with the hope that the child will dedicate themselves to all of the Torah’s commands. Some might appeal to obedience to God.

These are important, but the Torah rejects all of these as the basis for religious education. Instead, it stresses the importance of remembering the Exodus, which the Talmud (Pesachim 116b) understands to mean that “in each and every generation a person must view himself as though he personally left Egypt.” Perpetuating Torah depends on maintaining the Exodus as living memory. Turning the Exodus into personal experience creates a Jewish identity. God’s salvation on the individual and national levels becomes part of each person. It then acts alongside their unique talents, interests, and other memories to form an overall identity. Those children then “act accordingly.”

The Pesach Seder is singularly dedicated around this goal and is done with the family. The Torah places primary responsibility for educating children on parents, which the Torah calls “sharpening” (Deuteronomy 6:7), because they have the most powerful role to play.

With this in mind, we should deeply question the recent contention of Dr. Rivka Press Schwartz, a master educator and Modern Orthodox educational leader, on the 18Forty website. While she addresses “Parents of Intergenerational Divergees,” a significant portion of the letter, especially her “first fundamental theorem of parenting,” which she calls “the entire Torah of raising children. All the rest is commentary” indicates that she writes prescriptively about parenting in general.

Her first parenting principle states, “Your child is the person he or she is, not the person you would have designed them to be.” This perspective is true once older children have made their decisions, but it is not a Jewish “fundamental theorem of parenting.” Just to be clear, our children are not a tabula rasa for us to design, since such a perspective does not recognize the uniqueness of each person. But the alternative is not to minimize the role of parents and let children develop on their own. Rather, parents create memories for children, including reliving the Exodus from Egypt, so that they can properly adapt themselves to the social, moral, and religious expectations of life.

This process is obviously not foolproof. The parting prophecy of the prophets in Malachi aspires towards repairing parent-child relationships. By nature, these relationships can be filled with tension. And children who reject Torah observance are not necessarily a reflection on the efforts and dedication of their parents, as even the best parents and educators have not been able to properly transmit their deepest moral and religious values to their children. Children can reject these teachings, find the obligations too onerous, or want more independence than being part of a tradition allows for. But providing the right soul-nourishing experiences and memories for our children, especially at the Pesach Seder, is the best model that we have in shaping the Jewish identity of the next generation, and parents are central players in that story.

Rabbi Rafi Eis is the Executive Director of the Herzl Institute in Jerusalem and has been a teacher for 16 years.