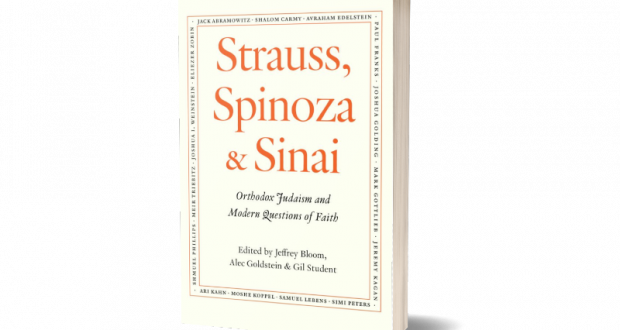 I am happy to announce the publication of a book that I edited, together with Jeff Bloom and R. Alec Goldstein — Strauss, Spinoza & Sinai: Orthodox Judaism and Modern Questions of Faith. The book contains essays by seventeen Orthodox scholars about the nature of faith in the modern and postmodern world. More details below. Here is a blurb from Rav Yitzchak Breitowitz about the book:

Strauss, Spinoza and Sinai, a masterful collection of essays edited by Jeffrey Bloom and Rabbis Alec Goldstein and Gil Student, takes Strauss’s critique of Spinoza to a new and deeper level. The seventeen contributions are erudite, insightful, and thought-provoking. And while all the authors are committed to the Jewish tradition, each brings unique perspectives to the age-old question of how and why a rational person can believe in God and Torah.

These questions are serious ones and far too often the Orthodox community just ignores them. It is truly an exhilarating pleasure to encounter Orthodox thinkers who not only engage with these questions but do so at such a high level of scholarship, sophistication and intellectual depth. This augurs well for the vitality of the Jewish community.

More about the book:

More than three centuries after Baruch Spinoza’s excommunication from the Jewish community of Amsterdam, his legacy remains contentious. Born in 1632, Spinoza is one of the most important thinkers of the Enlightenment and arguably the paradigm of the secular Jew, having left Orthodoxy without converting to another faith.

One of the most unexpected and provocative critiques of Spinoza comes from Leo Strauss.

Strauss grew up in a nominally Orthodox home and emigrated from Germany to the United States in the 1930s. He taught at the University of Chicago and was one of the most influential political philosophers of the twentieth century until his death in 1973.

Though Strauss was not an Orthodox Jew, in a well-known essay that prefaced his study of Spinoza, he critically examines modern philosophy’s challenge to traditional religion. There he argues that while the Enlightenment had failed to decisively refute Orthodoxy, at the same time, Orthodoxy could only claim to believe its core tenets were true but could not claim to know they were true. Strauss leaves the question at an impasse; both the Enlightenment and Orthodoxy rest on axioms that neither side can fully prove or fully refute.

Curiously, Strauss never asks Orthodox Jewish thinkers if his approach to defending Judaism against the claims of the Enlightenment is the same as theirs. This volume poses the question to a group of serious Orthodox Jewish thinkers in an attempt to find out if Orthodoxy has a better answer to the questions raised by Strauss than the one Strauss advanced on its behalf.

The seventeen essays in this volume use a variety of approaches, drawing on traditional primary Jewish sources like Scripture, Talmud, and Midrash; medieval rationalists like Maimonides; Enlightenment-era Orthodox sources; Jewish mystical writings like Kabbalah and Chasidut; modern philosophical movements including postmodernism and analytic philosophy; and contemporary Jewish Bible interpretation. While the answers differ, what unites these essays is the willingness to take Strauss’ question seriously and to provide “inside” answers, that is, answers given by Orthodox Jews.

Much of modern thought tries to square the circle of how to live in a world without belief. The better question is whether it is possible to recover authentic religious belief in the modern world. This volume is an Orthodox Jewish attempt to answer that question, one that no serious person can approach with indifference.

You can buy the book here: Strauss, Spinoza & Sinai: Orthodox Judaism and Modern Questions of Faith
Below is the table of contents 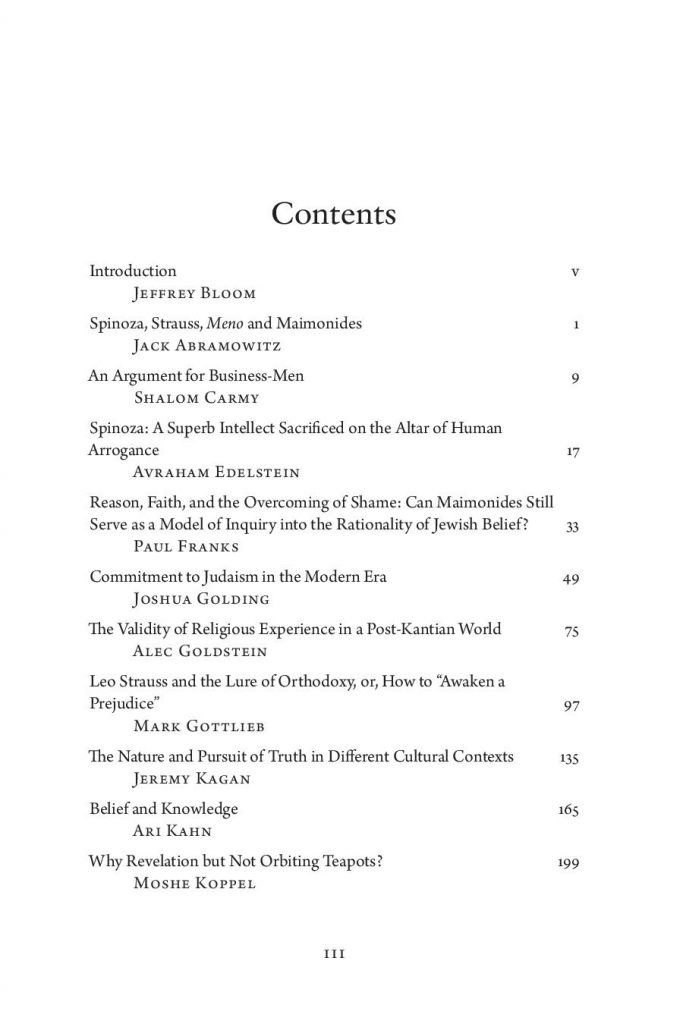 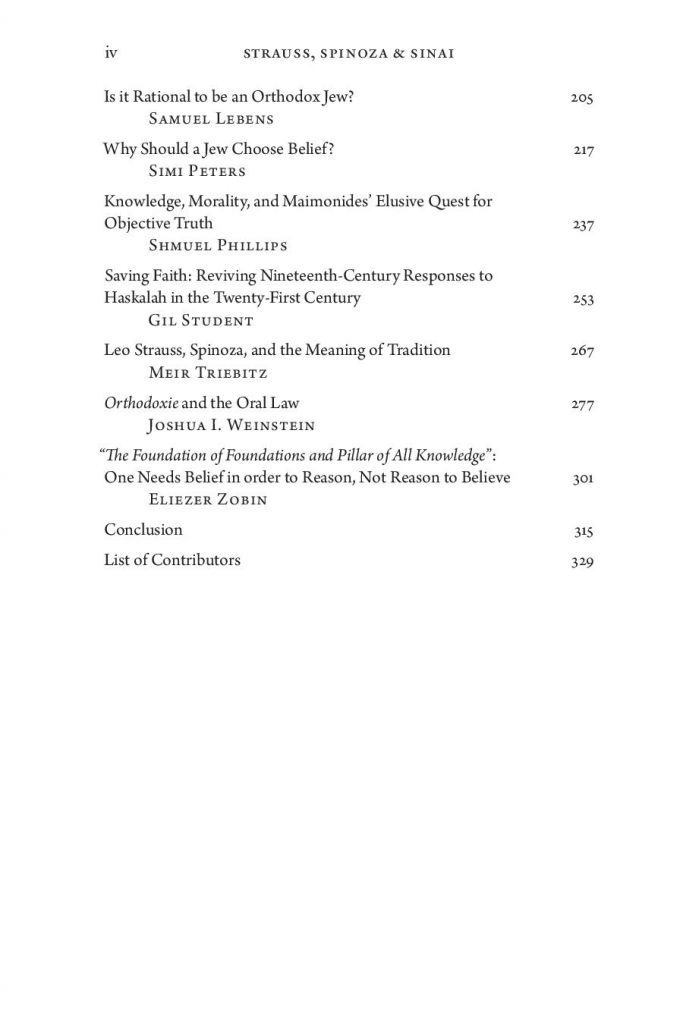