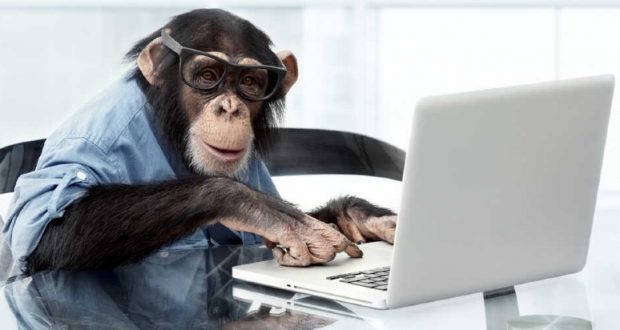 On odd occasions, a monkey makes an appearance in Talmudic legal discussions for a specific purpose. Monkeys are nimble enough to be able to do many actions that a human can do. However, a monkey lacks sufficient intent to classify an act as purposeful. If a monkey does it, it happens but it lacks intent. The few times this is raised in the Talmud generated among commentators the phrase “ma’aseh kof, a monkey’s action,” which refers to any act that is done physically but without intent. I would like here to review some of the Talmudic passages that discuss a monkey’s actions.

The Sages seemed to have some familiarity with monkeys. The Gemara (Bava Kamma 80a) lists monkeys among the animals you are allowed to raise. Rav Gamda asked sailors to bring him something from overseas for four zuzim and they brought him a monkey (Nedarim 50b). All the women in the world are like monkeys compared to Sarah (Bava Basra 58a). If you see a monkey in a dream it is a bad sign for you (Berakhos 57b). If you see an elephant, a monkey or a vulture then you say the blessing of “meshaneh ha-beri’os” (Berakhos 58b). There seems to be an expectation of seeing a monkey at some point, in some places.

In order to establish an eruv, you need to collect food from participants and place it in a communally accessible place. (Nowadays, we just gift it to everyone, which makes it easier.) You do not have to send in your food contribution yourself; you can have a messenger take it. However, that messenger has to be responsible. The Gemara (Eruvin 31b) says that if you send you eruv food with a trained elephant or a trained monkey, the eruv is invalid even though they performed the task. It is only valid if they assigned someone to receive it from the animal and then put it in the right place. The monkey’s action is not a valid legal action but it gets the food to the right place and then a human can take it and perform the necessary action.

The lechem ha-panim (showbread) in the Temple, once they are sanctified, have to rest with the bazikhin (bowls with frankincense). If, after consecration, they remain in the place without the bazikhin overnight, they become invalid. This raises the question of what to do with showbread placed days early in the Temple without bazikhin (for whatever reason). Once Friday night arrives, the bread becomes sanctified and if there are no bazikhin the bread becomes invalid overnight so that on Shabbos morning it is invalid. But the Mishnah (Menachos 100a) raises a case in which you should leave the bread in its place for a week and add the bazikhin the coming Shabbos day. Shouldn’t the bread be invalid by Shabbos morning?

The Gemara (Bava Kamma 101a) discusses whether dying a stolen wool substantially increases its value. For example, if you steal wool and steal dye, and you then dye the wool, if you return the dyed wool have you satisfied your obligation? If the dyed wool increases in value, then you have repaid for both the wool and the dye. If dyed wool retains the same value, then you have only satisfied your obligation to return the wool and now must pay for what the dye was worth. Ravina presents a different case: a monkey takes someone’s wool and dips into another person’s dye. Can the dye owner demand payment for the dye from the wool owner (if the wool increases in value) or does he lose the dye completely because the monkey is not liable for his actions?

The Gemara (ibid., 100b) quotes Rava who says that you remove the bread before Shabbos evening and put them back on Shabbos morning. Mar Zutra or Rav Ashi say that this is unnecessary. Since the showbread was put in its place at a time that was not its mitzvah, it is as if it was put there by a monkey. Meaning, the act technically took place but it has no legal validity.

A kohen must dip his finger in the sacrifice’s blood that is in the vessel and then sprinkle it on the altar (Lev. 4:34). If a monkey comes and places blood on the kohen‘s finger, this is invalid and the kohen must take more blood on his finger from the vessel (Zevachim 14a). Again, we see that an action can take place physically but have no legal recognition because it is not performed by someone with proper intent. When an action does not require proper intent, a monkey’s actions may suffice.

The Mishnah (Yada’im 1:5) records a debate over whether a monkey can wash a person’s hands. Everyone agrees that someone legally incapable of intent (e.g. mentally incompetent) can wash a person’s hands. The first opinion (Tanna Kamma) is that even if you spill a barrel of water and then let that drip on your hands or even if a monkey pours water on your hands, that qualifies because you do not need intent for hand washing. R. Yossi disagrees because he requires human causation (ko’ach gavra), even without intent. A monkey can perform an act but he cannot give it human attribution.