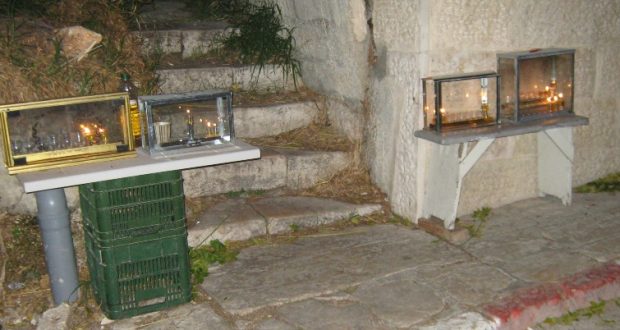 I. Lighting in Danger

The Gemara (Shabbos 21b) says that you must light your Chanukah menorah near the doorway (opening, pesach) of your house on the outside. If you live on an upper floor, you should light it in your window. And in times of danger, you light the menorah on your table. This list of possibilities is unusual for a mitzvah, which normally has one way of performing it. For well over a millennium, Jews in most if not all places, have lit exclusively indoors even when there is no danger. Where should we light today, outside of our door or inside?

From the language of the Gemara, it would seem to depend on the situation in any given generation. If there is danger, you should light indoors. If not, you should light outside your door. But what kind of danger is necessary? If gentiles forbid us from fulfilling a mitzvah and threaten us, shouldn’t we do it anyway? Normally, we do not give our lives for a mitzvah except for idolatry, adultery and bloodshed. However, in a time of oppression (shemad), we sacrifice ourselves for even minor practices. Why does the Gemara compromise on the Chanukah menorah in a time of danger rather than require martyrdom?

Rav Yom Tov of Seville (Ritva, 14th cen., Spain; Commentary, Shabbos 21b s.v. u-vishas) says that the danger of which the Gemara discusses must not mean a life threat. If there is a life threat, then we suffer martyrdom rather than violate a prohibition but we do not suffer martyrdom over a positive commandment (see Rema, Shulchan Arukh, Yoreh De’ah 157:3). Rather, the danger here is “threat of pain or hatred, like in France.” He sees this in Rashi’s commentary (Shabbos 21b s.v. ha-sakanah). Presumably Tosafos (ad loc., s.v. u-vishas) in the name of Ri mean likewise. The possibility of anti-semitism, vandalism and attacks suffices to light inside rather than outdoors.

What about years/generations in which there is no danger at all? Rav Yitzchak ben Abba Marri (12th cen., France; Sefer Ha-Itur, Aseres Ha-Dibberos, Hilkhos Chanukah) says that “after they practiced in the times of danger, they practiced.” Meaning, once it became customary to light indoors during a time of danger, that became the practice even when there is no danger. This is quoted also by Rav Tzidkiyah Ha-Rofei (13th cen. Italy), in his Shibbolei Ha-Leket (185). This seems quite reasonable. It is hard to determine every year whether it is too dangerous to light outdoors. It makes more sense to light indoors consistently in order to avoid trouble in the bad years. Sadly, we have seen throughout the millennia how quickly good times can turn bad.

However, even these sources are less clear cut than they seem. The Sefer Ha-Itur, in the very same sentence, continues that whoever can light outdoors should do so. He allows lighting indoors but encourages lighting outdoors. Since people became used to lighting indoors during difficult times, they can continue doing so even as the situation improves. But ideally, they should light outdoors when they can. Rav Yitzchak Or Zaru’a (13th cen., Austria; Or Zaru’a, Hilkhos Chanukah 323) says that in his time, people did not light outdoors. But he does not know why because there was no danger.

It seems unquestionable that the practice throughout the generations was to light indoors. Rav Chaim Elazar Shapiro (20th cen., Hungary; Nimukei Orach Chaim 571:1) suggests that we light indoors due to the wind. Similarly, Rav Yechiel Michel Epstein (19th cen., Russia; Arukh Ha-Shulchan, Orach Chaim 671:24) says that we light indoors due to inclement weather that would extinguish the lights. In theory, we could light the menorah within a glass case but, Rav Epstein says, the halakhah does not require us to go that far. Rav Ya’akov Emden (18th cen., Germany; She’eilas Ya’avetz 149) likes the idea of a glass case but says that since it is difficult and expensive to make one, you should light indoors. Although he says that if we could make one without trouble, you should use it whether you light indoors or outdoors, because either way it protects the menorah.

In a surprising responsum, Rav Yehoshua Ehrenberg (20th cen., Israel; Devar Yehoshua 1:40), the head of the Tel Aviv beis din, argues that you do not fulfill the mitzvah today if you light outdoors. He says that due to danger, the Sages uprooted the original enactment to light outdoors and replaced it with an enactment to light indoors. We see similarly that other enactments due to danger remain in place even after the danger passed, such as blowing shofar later in the morning (Rosh Hashanah 32b).

Rav Ehrenberg points to the Gemara (Shabbos 21b) that someone who light indoors and then brings the menorah outdoors has not done anything (lo asah kelum) because lighting the menorah is the mitzvah and must be done in the proper place. Why don’t you fulfill the mitzvah, even if in a lesser way? Rav Ehrenberg explains that light outdoors and indoors aren’t just greater or lesser ways of doing the same thing. Rather, there is a different kind of publicizing the miracle — outdoors to the public and indoors to the family. Originally the enactment was to publicize the miracle to the public, and if you lit indoors you did not accomplish that. Due to danger, the Sages changed the enactment to requiring publicizing the miracle indoors to the family, and if you light outdoors you do not accomplish the mitzvah.

This responsum generated heated response. Rav Yosef Shalom Elyashiv (21st cen., Israel; Kovetz Teshuvos 1:67) argues point by point with Rav Ehrenberg. In general, I don’t understand Rav Ehrenberg’s thinking. The Sages already said in the Gemara that ideally you should light outdoors but, in a time of danger, you should light indoors. Both enactments were in force simultaneously. And, as noted above, even the Sefer Ha-Itur mentions both practices together — people have the practice of lighting indoors even when there is no danger but if possible they should light outdoors.

While Rav Elyashiv responds to most of Rav Ehrenberg’s, he does not address the above proof that if you light indoors and then place the menorah outside, you have not done anything. I found that Rav Moshe Sternbuch (cont., Israel; Mo’adim U-Zemanim, vol. 2 no. 140) discusses this passage and offers an explanation that effectively refutes the proof. Rav Sternbuch says that lighting outside is an enhancement to the mitzvah. The Gemara does not say that if you light indoors, you do not fulfill the mitzvah. You do, in fact, fulfill it. However, you do not fulfill the enhancement. Regarding lighting outdoors, which you are trying to do by placing the menorah outdoors, you have not accomplished anything because the actual lighting was indoors. In that sense, you have not done anything. But regarding the mitzvah itself, you have fulfilled it.

In practice, the prevalent custom outside of Israel is to light indoors. This is completely justified by historical precedent and by the sadly growing anti-semitism, including the not infrequent attacks on individual Jews walking down the street. In Israel, many light outdoors in glass containers. May we all merit to live in Israel and fulfill the original enactment of Chanukah lights outdoors.