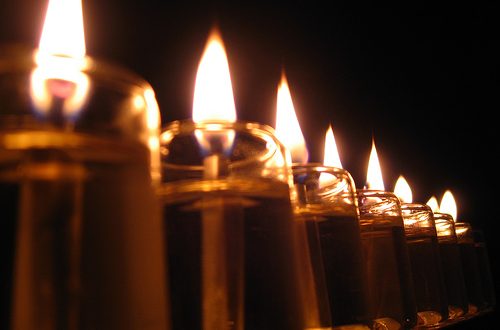 Often, when social circumstances change significantly from the past, some people automatically assume that Jewish law must change. Others summarily dismiss the suggestion that the law will ever change. Both approaches are incorrect. Rather, these matters require careful and sensitive analysis by the leading scholars to determine the nature of the law and whether the change in circumstances requires a change in law.

We publicize the miracle of Chanukah each night of the holiday by lighting oil or candles at the beginning of the night. For how long must those lights last? The answer must take into account the dramatic differences in life between Talmudic times and today.

The Gemara (Shabbos 21b) says that we light as the sun sets until foot traffic in the street ends, as defined by the time that wood merchants return home from work. The wood merchants were the last people in the marketplace to go home, waiting for people who found themselves lacking wood for their evening fires. Authorities throughout the ages have followed the Rambam (Mishneh Torah, Hilkhos Chanukah 4:5) that this time span for Chanukah lights lasts approximately half an hour. That means that we must light our Chanukah candles not later than half an hour after the onset of night and keep them lit for the whole half hour period.

However, today people are less dependent on sunset. With the advent of electric lights, we work later and travel for other purposes well into the night. The occupation of wood merchant no longer experiences the prominence it once had. Must we light candles that can remain lit until 11pm or later, depending on the neighborhood?

Additionally, the Gemara (ibid.) says that the proper practice is to light outside, so everyone can see. However, the Gemara adds, during times of danger you can light indoors. According to Rashi (ad loc., s.v. ha-sakkanah) and Ri (Tosafos, ad loc., s.v. u-vi-sh’as), the danger is that members of the Zoroastrian majority may extinguish Jewish flames. According to Tosafos elsewhere (Shabbos 45a s.v. mekamei), the intent here is actual physical danger, a government decree forbidding Chanukah lights. Throughout the Diaspora, people light inside their homes. Where the danger is neighborhood mischief, i.e. extinguishing the lights, people light near their windows. Where the danger is more ominous, people light in an inner room far from the view of outsiders.

When people light indoors, for how long must the lights remain? The concern for people walking in the streets seems irrelevant because they cannot are the lights anyway. Is it sufficient for people to light for a brief moment and then extinguish the candles. Those living in fear of government persecution may welcome this possibility.

To understand this proof, we have to recognize the different interpretations of the beginning of the time to light on Chanukah. Three main views exist: the beginning of sunset (Bi’ur Ha-Gra, Orach Chaim 672:1, following Rambam and Mordekhai), the end of sunset (Ran and Rashba, quote in Bi’ur Ha-Gra) or dusk (Shulchan Arukh, Orach Chaim 672:1, following Rabbenu Tam and the Rosh). Throughout the centuries continuing to today, we find different authorities locating the ideal lighting at these times, although they allow later lighting if necessary. Additionally, we find that they all require lights to remain for at least half an hour, the Talmudic measure of when the wood merchants return home.

Rav Moshe Sternbuch (Mo’adim U-Zemanim, vol. 2, no. 141) offers a different proof. He points out that the minimum of half an hour applies also to the Friday and Saturday nights of Chanukah. However, on Friday nights the wood merchants certainly would return home earlier because of the onset of Shabbos. On Saturdays they did not work. On neither day the wood merchants returned home half an hour after sunset (or dusk). Apparently, the half hour minimum applies regardless of when wood merchants actually return home on any given day or in any specific place. Similarly, whether you light indoors or outside, the same minimum should apply.

Times have changed but the new social circumstances may not affect all laws equally. Regarding the time to light, some authorities allow for greater leeway due to the later street presence. Rav Sternbuch (ibid.) allows people to light outdoors with a blessing until most people return home from work, which he estimates (in South Africa a few decades ago) is about two hours after sunset. Rav Kamenetsky only allows a blessing within half an hour of the latest time to light for those who light outdoors. But if you light indoors, you can light with a blessing as long as people are awake. Regarding the length of time for which the lights must remain, many authorities believe that the changed circumstances do not impact the rule.