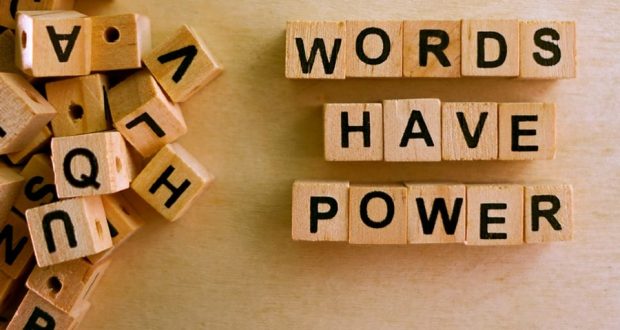 Say What You Mean. Words Matter

With the power and majesty of His words, God brings into being all of Creation.  With ten Divine utterances, all that is was brought into existence.  In doing so, God not only presented Himself as the Creator of all but demonstrated the power of speech, a gift he bestowed on the crown of His creation, on Man.

Possessed of this gift, it is clear that we are to walk in God’s ways; that we are to be, as we will come to be told, “Holy for I am Holy.”  It may well be argued that all God’s creatures communicate but it is only Man who is capable of communicating the depth of his intellect and his soul; only man can communicate his heart.  It is only Man who is capable of using speech to be self-referential and to praise the One Who created all.

With speech we praise the One Who spoke and in doing so brought the world into being.  A tradition teaches that this blessing is so holy that a note fell from heaven with its words written upon it – a note with exalting words to be spoken to bless the spoken word, and the One who spoke them.  If this seems circular, it is to emphasize the power, the value, the holiness of words and, because of this power and value, the vast potential words have to create and to destroy.  In sharing with us the gift of speech, God has given us access to divine power.

This sliver of holiness, with its awesome potential, is the reason the Torah cautions us time and time again to give heed to our words.  We are admonished to think before we speak.  There are more mitzvot about speech in the Torah than any other.  Just consider how many al cheits we klopped on Yom Kippur that related to our mouth and lips!

Through speech we declare our bond to God and His Torah – Na’aseh V’nishma!

Our speech can elevate us to the highest level of spirituality.  That very same speech can drive us down to the basest of vulgarities.

How we use speech affects us and the world.

Our words define who we are.  They define the world we live in.  Wise and kind words elevate both speaker and the listener.  Cruel words cut deeper than a knife.  Insults continue to bite years and years later.  A teacher’s insensitive remark can change the trajectory of a student’s life.  A husband’s unfeeling words to his wife can diminish her in her own eyes.  A parent’s harsh words to a child can hurt for a lifetime.

Yes, words matter.  In Bereishit, God invited Adam to name every creature and thereby give them meaning and their place in the world.  The names Adam bestowed upon the creatures reflected their essential natures.  He named the dog, kelev; the letters of which also spell k’lev – like a heart.  This reflects the loyalty and friendliness of the dog.

But what of Adam’s own name?  Adam was formed from the adamah – the red earth.  Yes, Adam has a physical, corporeal being.  But didn’t God also breath into Man a neshama, a soul?  With this neshama, Man became a thinking, caring, speaking being.  So why didn’t God name His creation “Neshama” instead of “Adam”?  I think it is to remind Man always of his material nature and how quickly and easily his physicality can extinguish the soul within; it is to remind him to remain forever vigilant and protective of his neshama.

The constant and continual shifting dynamic between man’s essential natures – adamah and neshama – is the fundamental dynamic and struggle of our existence and it is one most often exhibited in our speech.

Just the other day, I came out of shul and overheard a fellow davener – still holding his tefillin in hand! – talking to a friend about events in the neighborhood while using nivul peh – the coarsest language imaginable.  He had no sooner completed the words of his neshama than he was overwhelmed by his adamah.

Moreinu Rav Yisroel Belsky zt’l wrote in his profound essay, “The Value of Pure Tongue”, that the single most defining quality of being human is the ability to articulate ideas and convey them to others through language, a direct consequence of the elevated neshama that Hashem breathed unto Adam HaRishon. “Vayipach be’apav nishmat chaim – And He breathed into his nose the breath of life”, which the Targum renders as ruach memallelah, the spirit of speech.

To speak with nivul peh is to corrupt the Divine image within.

It may be unfair to burden Man with speech.  After all, Bereishit is the Ideal.  It is Perfection.  In Bereishit, we encounter God speaking.  But, as we know, even in the perfection of Eden, adamah was a powerful tug.  By the end of parashat Bereishit, we find God grieving.  God saw, “…that the wickedness of Man was great upon the earth, and that every product of the thoughts of his heart was but evil always.”

His creation had betrayed Him.  He would destroy it all.

“But Noach found grace in the eyes of Hashem.”  Because of Noach, this one tzadik tamim …b’dorotav – this one righteous man, perfect in his generation – rather than destroy the world He would save enough of it for it to continue on.  Noach and his family would survive the Mabul, along with, “…all that lives, of all flesh, two of each bird according to its kind, and from each animal according to its kind, two of each shall come to you to keep alive.”

Of course, the post-Mabul generation would have to start anew.  Thanks to the righteous Noach, the world and society would endure but it would have to be ‘reconstructed’ with values and morals.  Even more hopeful, ten generations after Noach, there will be an Avraham, then Yitzchak and Yaakov and the twelve tribes.

There is a Godly plan!  First, however, the world would be “flooded”.

“Build an ark,” Noach is told.

With words, God provides the detailed instructions for the continuation of creation.  Intrinsic to these instructions is the lesson God clearly felt was required for life to continue on.  This lesson is that civil society depends on civil speech.  There is an urgency to this lesson.  It could not wait until the rains started to fall.  It could not wait for the waters to eventually recede.  It was a lesson for now.

The lesson is powerful.  It is that the words we use reflect our inner state of mind and that each word makes a roshem, each word has great influence.

Noach is told to bring every living species into the teivah, “…seven pairs of clean animals and one pair of not clean animals.”  As we have noted countless times, every aspect of Torah is perfect and complete.  There is not a word, a space, a phrase that is either missing or extraneous.

There are no wasted words in Torah.  Words are too precious.  So, when the Torah says, “Of every clean animal take unto you seven pairs, a male with its mate, and of the animal that is not clean, two, a male with its mate…” it is fair for us to ask, why not say simply, “impure animals”?  Why add the “extra” words, asher einena tehora, “that is not pure”?

In Masechet Pesachim (3a) we are taught that, “a person should try to never use unrefined [davar meguneh] disgusting words.”  The Talmud explains that in giving Noach instructions, the Torah describes the non-kosher animal not as teme’a (impure), which is an unrefined term, but instead the posuk uses eight extra letters (a big deal for the Torah!) asher einena tehora, that is not pure.  Not even an animal should be labeled as “impure”.   Even when presented with the task of referring to a beast, it should be done in a dignified and decent way.

In Bava Basra (123a), the Talmud amplifies on this basic lesson, “If the Torah is so sensitive and extra careful and cautious to not use unrefined terms about animals, it certainly would not describe the flaws of righteous people! If it is unacceptable to speak of animals in an unrefined manner, certainly so of human beings.   Torah is addressing Adam, reminding him that he can easily refer back to adamah rather than cling to his neshama.

Clearly, this is a lesson that God felt needed teaching as Noach, and his entourage entered the teivah in anticipation of a reconstituted society.  If society was to be reconstituted, it would depend on clear, pure and respectful Godly speech.

This is a lesson and reminder sorely needed today, in a society where obscene, insulting, violent, frightening and bullying language is not only the norm but has been elevated to the standard of public discourse by our leaders.