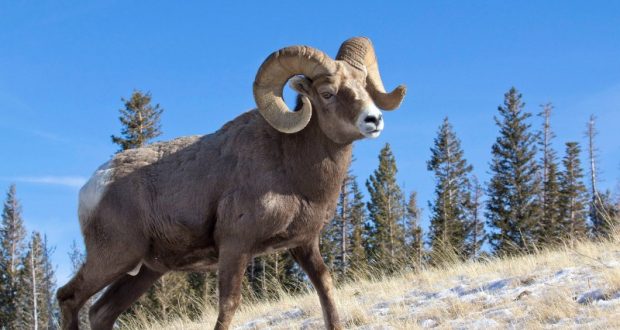 Hineini: Abraham’s Test and Our Future

And Abraham raised his eyes and saw – behold a ram! – afterwards, caught in the thicket by its horns, so Abraham went and took the ram and offered it as an offering instead of his son (Bereishit 22:13)

Who dares imagine Abraham’s heart at that awful moment when he was tested and called to place his son, his only son, the son he loved, upon an altar to be sacrificed?  Who could fathom his soul in that moment of utter obedience to God?  And let us be clear, the moment was solely about Abraham’s faith and obedience.  This act was no punishment for some transgression on Yitzchak’s part, for Yitzchak had made no transgression.  He was pure.

The God who asked Abraham to sacrifice his son is the same God who revealed Himself to Abraham and had given him Yitzchak as the fulfillment of His promise and covenant with Abraham.  This God before whom anyone but Abraham would break, was now testing Abraham – v’HaElokim nisa et Avraham – to use his own hand to sacrifice the son of his old age, the son through whom that promise, and covenant would be realized.

Midrash teaches us that the Torah uses the word nisa to suggest elevation, like a nes, a banner flying high above an army as it marches forward.  So immediately, we sense that in this test, God is exalting Abraham; that in his earlier trials Abraham rose higher and higher until here, at the moment of the Akedah.  This was the ultimate test.  After this, Abraham could reach no higher.

God would never again speak directly to him.

Abraham, the man of perfect faith, passed this nisayon.  In each and every detail, his faith directed him.  “He took in his hand the fire and the knife, and the two went together.” (22:6) We, lesser men, tremble just in the reading of this awesome narrative.  We avert our eyes as, “Abraham stretched out his hand and took the knife to slaughter his son.” (22:10)

“No!” our souls cry out. God would never allow this!  And indeed, an angel called to him from heaven.  “Do not stretch your hand against the lad nor do anything to him for now I know that you are a God-fearing man…” (22:11-13)

Being stopped with the knife held high is almost as disquieting to us as the test itself!  What are we to think?  What was Abraham to think?

Rav Soloveitchik explains, “…[man] belongs to God, body and soul. God owns human existence at every level – physical, spiritual, and social.  From time to time, God calls upon man to return to Him whatever is His.  He demands that man give not a part but the whole of himself.”  Abraham was the perfect servant of God.  He was willing to give all.  When God told him to sacrifice his son, Abraham surrendered without argument or debate.  Unlike him, we argue with God against any minor misfortune or challenge.

The Pesikta Rabbasi teaches us that the Akedah took place on Rosh Hashana, which is why the Torah reading for the second day of Rosh Hashanah is the parasha of the Akedah. Throughout our Rosh Hashanah prayers, we ask God to, “…mercifully remember today, the Akedah of Yitzchak for the sake of his offspring.”  Here we learn that God’s response to Abraham’s perfect faith is a promise to us; a promise of Jewish survival and triumph; a promise which sustains us to this very day.

When I taught history in Yeshiva University, I would often challenge my students to explain why we still walk the earth while Rome, Greece, Byzantine and all the other great empires rose and fell; why we, Am Yisrael – without land, without armies, without resources – survived despite a wicked Haman in each and every generation rising to try and destroy us.

I told my students that the explanation resides in that long-ago moment on Moriah when, “Abraham raised his eyes and saw – behold, a ram! afterwards, caught in the thicket by its horns…”

“How does this explain our survival?” my students demanded.

That day, I told them, Abraham was shown that his test was not only about his individual faith.  That faith he had been called upon to demonstrate many times.  By this test, God created the means for Abraham’s descendants to survive all adversity.

In Bivolari over a century ago, R’ Yisrael Antonier asked my grandfather HaGaon Rav Bezalel Zev Shafran ZT’L to explain the Onkelos translation of the pasuk, “Vayisa Avraham et einav, v’hinei ayil ahar ne’ehaz b’sevakh b’karnav as “Abraham raised his eyes after these and saw that one ram was caught in the thicket.”  His question about the translation was insightful.  Unlike Onkelos, the Torah does not say ayil echad (one ram), rather it says ayil ahar (other or another ram).  And yet, there was no other ram!

Based on these readings, my grandfather suggested that far from a mistranslation, Onkelos’s translation made perfect sense, for he was alluding to all these events throughout the generations. Likewise, his translation of “one ram” is correct because there was only one ram there.

God showed Abraham the future which was surely even more frightening for his eyes to behold and his heart to contemplate than our own looking back.  There has hardly been a time in all history when someone, somewhere did not try to destroy us, through violence or assimilation.

As Abraham raised that knife on Moriah that morning, he saw beneath that sharp edge not just his son but the future of his people.  In that moment of revelation, his heart was surely broken… but then “suddenly” a ram appeared, caught in the thicket by its horn – that very same horn, that one horn that will be sounded to herald the ultimate redemption.

In wrestling with this difficult – and seemingly incorrect – translation from Onkelos, my grandfather made clear that to the man of faith there is more to the text than “meets the eye”.  A faithful Jew sees “deeper” than the mere text of the story and sees the hand of God writing a narrative of ever greater meaning.  All Jews understand that in the sounding of the shofar there is a call to teshuvah, a call to repent and improve.  The believing Jew knows that in that powerful blast there is also a call to better wrestle with and understand the mystery of Jewish survival, a mystery first revealed and explained to Abraham during the most exalted and frightening test any man could ever confront – when the promise of the future was on the altar before him, about to be eliminated by his very hand. 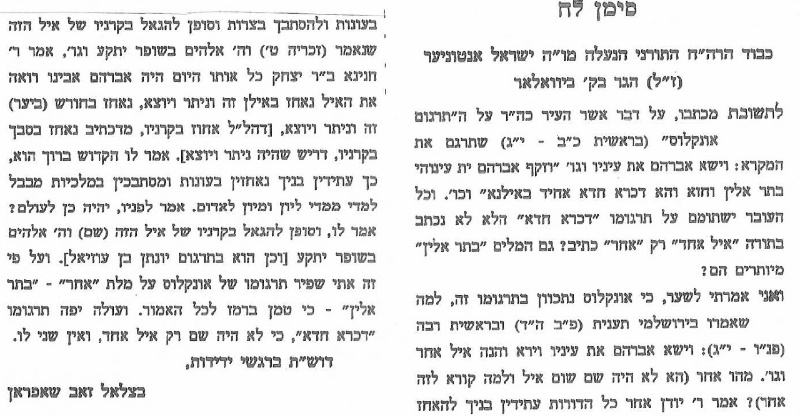