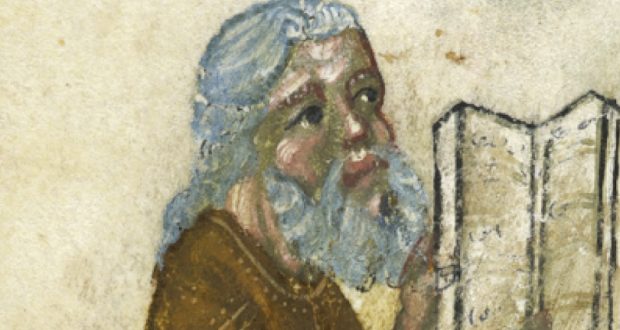 The first Sanhedrin of this period was led by two students of Antigonus, Yose b. Yoezer (Nasi) and Yose b. Yochanan (Av Beis Din).[2]The identification of the which of the Zugos was the Nasi and which was the Av Beis Din appears in Chagiga 16b. One of their famous gezerios was ritual impurity (tumah) on lands outside of Eretz Yisrael (טומאת ארץ העמים) and on glass vessels (Shabbos 14b). It is at this time that we hear about the first recorded machlokes, the debate over leaning (smicha) on a korban on Yom Tov. It was also around this time that the Chanukah story took place.

The next Sanhedrin was led by Yehoshua b. Prachya (Nasi) and Nitai HaArbeli (Av Beis Din). They were followed by Yehudah ben Tabbai and Shimon b. Shetach. Chagigah 16b records a dispute over which one was the Nasi and which one was the Av Beis Din. Shimon’s sister was the righteous Shlomtzion, wife of the sinful Chashmonei King of the Jews, Alexander Yannai (ינאי המלך).

The next Sanhedrin was led by Shmaya (Nasi) and Avtalyon (Av Neis Din). They were children of converts from the family of Sancherev (Gittin 57b).[3]The Rambam in the introduction to his Mishna Torah implies that they themselves were converts, as does Tosafos Berachos 19a s.v. דוגמה. The problem with this is that a convert is barred from … Continue reading Choni HaMagel was a famous scholar who lived at this time.

Following Shmaya and Avtalyon, the Sanhedrin was led by the Bnei Beseira (sons of Beseira). Pesachim 66a relates that once a question arose regarding whether to sacrifice the Korban Pesach when Erev Pesach fell out on Shabbos. Although, they were unsure how to rule, Hillel, who had arrived recently from Bavel, was able to answer the question through his analysis of the Torah.[4]The Tosefta in Pesachim records that he also claimed to have an oral tradition regarding this question. In response, the humble Bnei Besirah (see Bava Metzia 84b) stepped down so that Hillel could be installed as the Nasi of the Sanhedrin.[5]The family of the Bnei Besira continued to be active all the way through the destruction of the second Beis HaMimkdash and into the period of the Yavne Sanhedrin. It was around the time of Hillel that the Romans conquered Eretz Yisrael from the Syrian Greeks.

When Hillel, whose mother came from the family of Dovid HaMelech, was appointed Nasi, the Sanhedrin decided that malchus Yisrael should always be incorporated into the position of the Nasi.[6]The Chasam Sofer (Bereshis 46:28) suggests that this might have been done as a response to the Roman appointment of Herod as king of Judea. For the next fifteen generation, the Nasi was from Hillel’s family.

Hillel originally served as Nasi alongside Menachem, the Av Beis Din.[7]Chagiga 16b reports a debate regarding what happened to Menachem. But after a period of time, Shammai HaZaken replaced Menachem as Av Beis Din, and functioned in this role alongside Hillel for many years.

The Talmud (Shabbos 15a) states that the Romans conquered Eretz Yisrael one-hundred and eighty years before the destruction of the Beis HaMikdash. For much of this period, the Jews were ruled by ruthless imperial governors (Procurators) who taxed the Jews heavily and treated them harshly.

According to historical sources, the Roman period in Eretz Yisrael began in 63 BCE when the Romans, led by general Pompeii, conquered the region and created the Roman province of Syria. [8]Secular sources say Pompei conquered Eretz Yisrael one-hundred and thirty-three years before the Churban. At first, the Chashmonai Dynasty continued to rule the area, serving as vassals to the Roman Senate. During a brief war between the Romans and the Parthians (Persians), a Chashmonai king was installed as a vassal for Parthia. When the Romans won the war, they deposed the Chashmonai king and installed Hordus (Herod) as their vassal. Hordus came from an aristocratic family in Edom. Although he was raised as a Jew, he was most likely not halachically Jewish. Hordus killed off the members of the Chashmonai royal family and started the Herodian Dynasty. Hordus engaged in massive building in Eretz Yisrael, including the expansion of the Beis HaMikdash complex.