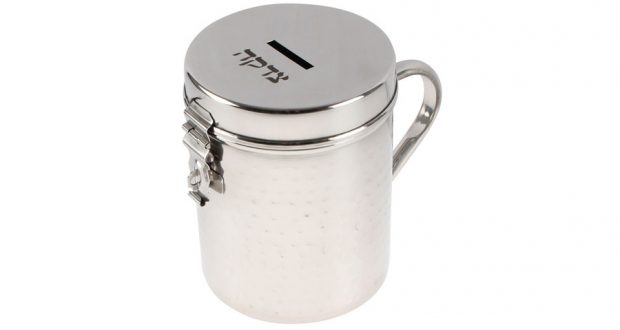 Moving a Tzedaka Box on Shabbat

Question: I, a gabbai, found on Shabbat morning that the tzedaka box was on the bima, where it would get in the way and/or get knocked off during laining. Is it permitted to move the tzedaka box in that situation?

Answer: Review the basic rules of tiltul min hatzad (indirect moving of muktzeh) will allow us to come to solutions.

The gemara, in three places (Shabbat 43b, 123a, 141a) raises the question whether tiltul min hatzad, i.e., by moving a non-muktzeh object one also causes a muktzeh item to move without touching it, is considered forbidden moving of muktzeh. Examples include moving a corpse by tilting the bed it is in so that it slides to a different bed, and grabbing a (picked) vegetable that is partially buried in earth, which causes the surrounding earth to move. The gemara identifies this question as a machloket among Tannaim and Amoraim. In discussion about the halachic conclusions on this matter, Rishonim compare this matter to the mishna (ibid. 141a) that one may not arrange the straw (usually muktzeh) that is sitting on top of a bed with his hand but may arrange it using his body (ostensibly, min hatzad).

Based on the above, we suggest the following possibilities: 1) If the tzedaka box is situated in a place that makes it hard to lain, one may push or lift it with a non-muktzeh object to a place where it will not be in the way. This is a classic example of tiltul min hatzad for a reason other than the purposes of the muktzeh.

2) Similarly, if the bima is not fully useable because of the tzedaka box, you can carry the bima cover to deposit the tzedaka box somewhere, without moving it directly, and then return the cover to its place (see Shulchan Aruch. OC 309:3, based on Shabbat 142a). While vis a vis the cover, it suffices to keep it where it is and shake off the tzedaka box, we are not required to use the system of shaking off if it will cause: damage to the tzedaka box, some of the money to get lost, or an unsightly situation of coins on the floor (see Mishna Berura 277:18; Shemirat Shabbat K’hilchata 20:47; see ibid. (167) that some might disagree if not shaking it out in its place is only to not damage the muktzeh.) Using this system assumes that the bima cover is not a bassis l’davar ha’asur (a base for something muktzeh), which is quite clear since no one would purposely leave a tzedaka box on a bima for Shabbat (see Shulchan Aruch, OC 309:4).

If the tzedaka box is in a place on the bima in which it does not take away from using the bima effectively and respectably but one is only concerned that the tzedaka box might accidentally get knocked off, neither of the above systems suffices. #3 does.

3) If one is nimble enough to use an unusual part of the body (e.g., elbows, teeth) to remove the tzedaka box from the bima, this is permitted based on the leniency of tiltul b’gufo.