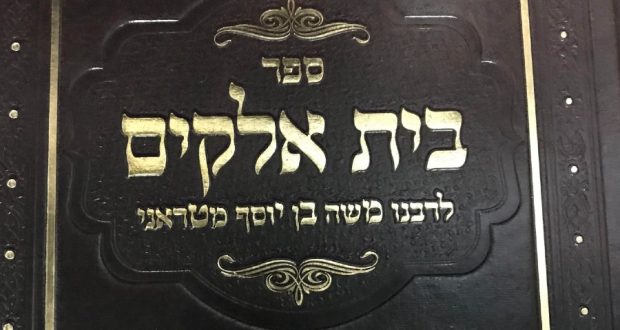 Getting Suffering to Atone for Sin

Mabit’s Sha’ar Ha-Teshuvah: Chs. 7-9: Getting Suffering to Atone for Sin

Chapter Seven: Matching the Teshuvah to the Crime

The categories of het, avon, and pesha reminds us we categorize transgressions by the underlying intention, unwitting, deliberate (although for the enjoyment of the sin), or malicious, a way to rebel against Gd (in one version; there are lots of nuances on these definitions, none of which are Mabit’s issue here). Mabit reminds us the failure to perform a mitzvah comes in similar types: the person might not have known of the mitzvah (did not know it was Rosh HaShanah or did not know the obligation to hear a shofar blown on Rosh HaShanah, for his examples), was unwilling to put in the effort to perform the mitzvah (to go to shul), or refrained from the mitzvah despite its being simple to do. For Mabit, these are the parallels to het, avon, and pesha.

He suggests the verse of shuv banim shovavim, erpa meshuvatam, Yirmiyahu 3;22, return ye backsliding children and I will heal your backsliding, refers to these three types. Banim, children, are those who did not know, whose lack of observance never broke the relationship with their Father; they need to repent and regret only their ignorance or inattentiveness to the obligation. Shovavim, backsliding (or wayward) ones, are those who couldn’t be bothered to put in the time or effort, the misdeed their repentance would address, where erpa meshuvatam, I will heal their waywardness, indicates a deeper problem, for such people to address in their repentance.

Just as was true for violations of the Torah, in other words, failure to fulfill the Torah’s commands comes in many versions, and the repentance must address the current version. Also similarly to transgressions, where successful repentance still left a debt to be repaid, repentance for not having performed some obligation need supplementation as well. The repentance does restore the person to being a tzaddik, as Mabit insists here again, where the supplement will involve repairing his/her inactions as well as accepting some suffering.

There’s more to the chapter, but our time is short (I have this week and then only two more until Yom Kippur!), so we will move to chapter 8, having been reminded repentance itself is a wholly internal experience, that experience does change based on what is being repented, the regret must address the specific character of the wrong, and that all of that, as complete as it is, addresses only the person’s status before Gd. Other avenues are needed to wipe away the spiritual debts created by the person’s misdeeds.

Chapter Eight: The Forms and Mechanism of Yisurim

Many people today object to, are bothered by, or resist the idea of yisurim, suffering, as a way to address sin. They recoil from what they see as victim-shaming, sending someone suffering the additional pain of suspecting them of having done wrong. Or, they say this suffering is disproportionate to any possible sin the person suffering might have committed. Or more.

Such people will not be convinced by Mabit’s certainty of the value and role of yisurim, but it should be instructive to those of us more open to tradition’s assertions. He notes yisurim can be physical, familial (a hard one, particularly if we mean adult relatives, since they then seem to be suffering for someone else’s sins), and monetary. The Par’oh and Avimelech who took Sarah from Avraham and the Par’oh of the Exodus experienced all three kinds, they and their households suffering a physical ailment, and then had to give a fortune of money to Avraham and, later, the Jewish people. [I think I always thought they suffered for their collusion, their letting the leader act wrongly; Mabit does not say that here.]

The righteous can suffer this way as well. Moshe has momentary tzara’at on his hand when he speaks ill of the Jewish people, Aharon loses his two sons as part of his punishment for his role in the Golden Calf [although Nadav and Avihu contributed to their own demise when they sinned during the dedication of the Mishkah, so Mabit may mean suffering family members deserve for their own reasons will have this other family member’s suffering mixed in; next time, he will more explicitly address the suffering of some for the sins of others], and Miriam had a week’s tzara’at.

In all the cases, the yisurim atone for the sin by reducing the sinner’s pleasure in the physical world and its experiences, because without one’s health, family, and fortune, it becomes impossible to enjoy life; as he says at the close of the chapter, the lack of enjoyment atones for the illicit enjoyment prior.

Human Courts, the Punishment of Relatives, and the Joy of the Righteous

In the human halachic legal system, monetary crimes receive monetary punishments, physical ones receive physical punishments (lashes), and relatives never bear consequences for the sins of relatives. In Heaven, though, the calculus involves identifying what pain this sinner will feel most intensely, to remove the joy of the sin, and sometimes the answer is seeing others suffer [it’s a movie trope, the person who withstands all personal torture but yields as soon as the torturer threatens a relative or paramour].

His view of yisurim also explains why the Torah can guarantee good outcomes, physical, financial, and familial, for those who successfully cultivate love of Gd. Such a person will not need yisurim, so all elements of his/her life will proceed without problem.

In addition, yisurim reduce the sinner’s interest in or temptation to sin [we hope; sadly, sometimes sinners stick stubbornly to sin, as it leads them down the path to destruction. Certainly we see that with addictions; I believe it can be true of sins as well, where the insistence on this violation is impervious to experience. Perhaps Mabit would say those are outliers.]

Yisurim work to wipe away the spiritual debts of sins, however, only if the sinner accepts them as atonement and a guide to acting better. A sinner who rejects the yisurim (meaning: denies they could be retribution for past sins), Gd forbid, will have gone through them without their accomplishing anything, Mabit says, because they only atone if recognized as a vehicle of atonement.

Mabit says yisurim can come for one of four reasons (he actually says for one of two issues, the past or the future, then splits each of those into two, a mode of presentation mori ve-rabi R. Lichtenstein zt”l employed as well). The one we know best is what we have been discussing, yisurim for kapparah, for wiping away the negative effects of past sins.

Now Mabit makes another claim many people today—even Orthodox rabbis, in my experience–vigorously deny. We have already said he held the person must accept the yisurim as atonement; now he says for yisurim to provide kapparah, the sinner must recognize which sin these yisurim have come to atone.

He proves this from an insightful reading of Berachot 5a, where Rava or R. Hisda said a Jew who experiences suffering should search his/her deeds. Mabit says the amora cannot have meant search whether s/he has sinned, because everyone has sinned. The search must be for a sin that matches these yisurim (because Mabit is sure yisurim reflect the sin, take away the pleasure had through that sin).

The Gemara envisioned a person who will not find a sin. For the usual reading, it is addressing only the very elite Jews who do not have sins. For Mabit, it is much more likely, it means only the person does not find a sin in his/her particular potpourri that matches these yisurim. The person should assume it is a matter of bittul Torah, the Gemara says, the failure to study Torah as much as possible for that person.

I think the common reading is that Torah is always good, it’s impossible not to sometimes fail to learn as much as possible, so if nothing else, this is a good place to focus. Mabit instead assumes proper Torah study addresses all of mitzvot (note his view of the curriculum of one’s Torah study, that it should take on the scope of Torah, at whatever level appropriate to that person), so by studying all of Torah one is—in word, which sometimes counts almost as much as in deed, such as the tradition that reciting the verses and laws of sacrifices can somewhat substitute for our lost Temple service—fulfilling all the mitzvot and thus addressing the yisurim. The end of the Gemara says if it is not bittul Torah, the sufferings must be yisurim of love, a category we will see next time.

Yisurim We Bring on Ourselves

Before he gets there, Mabit pauses to notice there can also be sufferings that have nothing to do with sin, are a result of the person’s poor regimen. People who eat/drink/dress improperly and then suffers consequences [alcoholism, pneumonia, diabetes, etc., Gd forbid], or who speaks or acts rashly and then is punished by other people [puts threats to a public figure online or invades the Capitol as part of a riot/insurrection, and loses his/her job] are not being sent yisurim by Gd, they are reaping what they sowed.

[This blurs the question considerably, yet Mabit has accepted both sides of the topic. Some suffering has nothing to do with sin; a three pack a day smoker who gets lung cancer is not necessarily suffering yisurim for sin, other than perhaps the sin of not caring for his/her health. On the other hand, suffering without such a background is for sin, and is for specific sin the person is supposed to be able to figure out.

That, too, is a challenge, because when we see people attribute causes to suffering, they come up with wildly different answers. I have theories about how we are supposed to handle that, but it’s not in Mabit, so let’s push on.]

Mabit also accept the idea of people causing themselves suffering as a way to atone for sin, as there are Talmudic examples of great scholars who recognized a sin and prayed for suffering. Too, if a person’s conduct leads to suffering (heart problems for lack of exercise, let’s say) and the person recognizes his/her sins would have justified greater suffering, it counts as accepting the yisurim as atonement.

That’s past-looking yisurim. We will pick up next time in the middle of chapter nine, with yisurim aimed at a better future, hoping we can finish all of the section before Yom Kippur, but satisfied that even if we do not, Mabit will have enriched our thinking about teshuvah and kapparah this Yamim Noraim season.