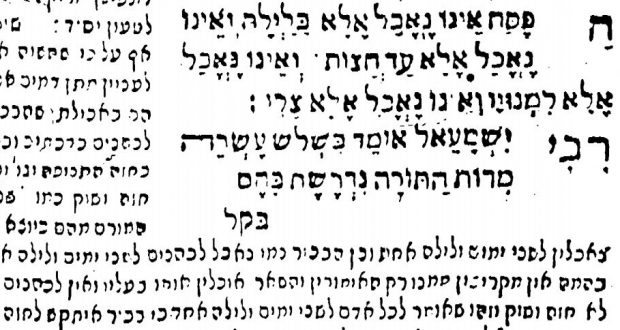 How Do You Spell Rabbi?

The Sages use different titles to refer to different levels of scholars because not all rabbis have equal authority. In order of increasing importance: Rav, Rabbi, Rabban, the scholar’s name (Tosefta, Eduyos 3:4). Among the last group we include Hillel and Shammai. Generally speaking, Rabban refers to someone who led the Sanhedrin. You had to obtain classical rabbinic ordination in Israel in order to be called Rabbi. Rav is the diaspora equivalent, for those who could not obtain ordination in Israel.

Nearly a thousand years after the close of the Talmud, it became apparent that divergent traditions had emerged for the proper pronunciation of what I spelled above as Rabbi. By the late eighteenth century, there were a surprising number of proposed vowelizations of the title, which seem to have converged in the nineteenth century into one primary spelling. In theory, matters like this can be easily resolved by looking at the Kaufmann manuscript of the Mishnah, which includes vowels. However, the manuscript consistently abbreviates the term Rabbi as R, leaving it without vowels. Similarly, because the word appears a few times in the prayerbook, in quotations from Talmud and Midrash, we should be able to check the vowelization in prayerbook manuscripts. However, they tend to diverge greatly.

Rav Shimon Ben Tzemach Duran (Rashbatz, 15th cen., Spain-Algeria; Magen Avos, Avos 2:1) insists that the proper pronunciation of the title is Ribbi, with a chirik vowel under the first letter reish, and not Rabbi, with a pasach under the reish. He says that if it was the latter, the title would be a diminution. It would mean “my master,” implying that he is not a universal authority but only an authority for you.

R. Eliyahu Levita (Ha-Bachur, 16th cen., Italy; Sefer Ha-Tishbi, entry for Rav) notes that many prayerbooks vowelize it as Rebbi, with a sheva under the reish. He argues that this cannot be correct because this would be an active sheva, which would render the second letter a veis and the word would be Revvi. He also says that “we Ashkenazim” (he moved to Italy after Jews were expelled from his town in Germany) pronounce the word as if there is a chataf kamatz under the reish — Robbi (like choli, illness). However, he sees no basis for this pronunciation. Rather, he agrees with Rashbatz that the title is pronounced Ribbi. He cites as proof the fact that some poets (paytanim) signed their poems be-ribbi (beis, reish, yud, beis, yud), as in R. Eliezer be-Ribbi Kalir, meaning R. Eliezer the son of R. Kalir. This indicates that these poets spelled the title Ribbi.

The controversial but influential grammarian, R. Shlomo Zalman Hanau (18th cen., Germany; Sha’arei Tefillah, par. 49) quotes R. Ya’akov Penso (17th cen., Italy; Divrei Agur) as saying that the title should be pronounced Robbi, with a chataf kamatz. R. Hanau dismisses this as untenable. Instead, he believes it is pronounced Rubbi (like ruby), with a shuruk (kubutz) under the reish. He says that it means “my master,” apparently unaware of or unconcerned with Rashbatz’s argument that this diminishes the bearer of the title.

Dr. Seligmann Baer (19th cen., Germany; Siddur Avodas Yisrael, s.v. R. Yishmael), whose texts and commentaries served in some ways as the basis of later Ashkenazic editions, argues for the spelling of Rabbi, with a pasach under the reish. He says that it is an Aramaic form of the word “rav, master,” meaning “my master.” Dr. Baer (he was a modest Hebrew teacher and his title is an honorary doctorate bestowed on him by the University of Leipzig for his grammatical works) disputes R. Levita’s proof from the signatures of poets. He claims that the signatures are only bei-rabbi, with the yud before the reish, not after it as R. Levita claims. This leaves the spelling of Rabbi ambiguous.

Dr. Baer proves that Rabbi is the correct spelling by comparing it to the title Rabban, which everyone agrees is spelled with a pasach under the reish. The word ends with a nun, which makes it greater than Rabbi. Similarly, we find the words “Rabbo” (his rabbi), “Rabbakh” (your rabbi) and “Rabboseinu” (our rabbis), which appear in prayerbooks with a pasach under the reish. “Rabbakh” appears in the Mishnah (Avos 4:12) and is spelled this way in the Kaufmann manuscript.

Dr. Baer brings proof from Rav Yosef’s statement in Eruvin (75b) that he confused the words “Rabbi” (i.e. R. Yehudah Ha-Nasi) and “rabbim” (the public). He had heard a teaching about the public and mistakenly thought it was stating R. Yehudah Ha-Nasi’s view. Clearly, the title Rabbi sounds like the word “rabbim,” and should be pronounced with a pasach under the reish.

Rashbatz had argued that the pronunciation Rabbi diminishes the title, making it “my master” rather than everyone’s master. Dr. Baer counters that it is a sign of respect, just like the French word “monsieur,” which literally means “my lord.” Dr. Baer makes such persuasive arguments that his footnote is replicated verbatim in Siddur Otzar Ha-Tefillos (s.v. R. Yishmael).

The pronunciation Rabbi has become standard. However, to this day, many Sephardim pronounce the word Ribbi as indicated by Rashbatz and Rav Ya’akov Emden.