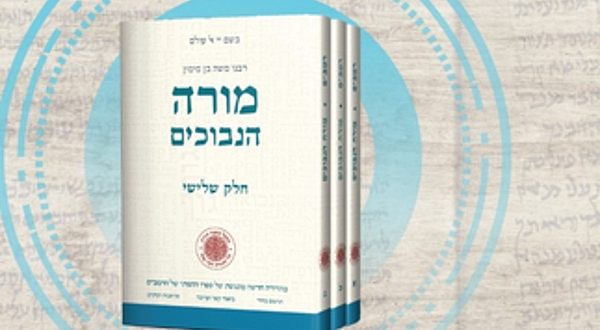 Maimonidean Thinking in the Modern World

This essay is excerpted with permission from Rav Ya’akov Ariel’s introduction to the third volume of the Mifal Mishneh Torah’s edition of Moreh Nevuchim. Translation by R. Moshe Schapiro. Published here with permission, although the author has not reviewed the translation. Section headings were added by the editor.

I. Historical Reasons for Commandments

Many chapters in the third section [of Guide to the Perplexed] are devoted to the rationales for the commandments. The Rambam generally explains the commandments with historical reasons based on the background of pagan religions and primitive rituals that promised blessing and success. The Torah rejected these acts, and in certain situations, like sacrifices, made use of a clever device: it allowed the continuation of acts that were externally similar to the aforementioned acts. However, it purified them from their wicked orientation and redirected them for the sake of Heaven alone. Many criticized the Rambam for this approach: is there no concern that the Torah, a living, real Torah, would turn into a dead anachronism, if such a thing could even be said? After all, ancient paganism has, thank God, already disappeared from the world, at least from the Western world. Moreover, this is, according to the Rambam, due to the indirect influence of Judaism. We live in a rationalistic world and these kinds of ancient rituals no longer exist. What then is the meaning of the commandments in modern life after the original reasons have ceased to be relevant? We cannot say that the commandments should be nullified, God forbid, for the ninth tenet of faith established by the Rambam is: “That this Torah will never be changed!”

True, the explicit basis for the commandments that existed in the past no longer exists in their ancient form, however the spiritual conditions that created them still remain intact. Perhaps the external form of those commandments no longer appears, at first glance, to be relevant today, however their internal meaning has not dissipated. Their underlying message is still in full force today.

The Rambam is firm in his approach that the proper understanding of God must be noncorporeal. The Rambam’s entire, masterful philosophical undertaking is a war dedicated against corporeality. He cleansed belief in God from any aspect of the sensuality. Anyone who even considers, with his impoverished mind, a corporeal description of God is in his eyes, like an idol worshipper. The ascendancy of intellect requires freedom from the domination of the senses. This inner struggle continues also in our days in full force.

Modern culture lives with an internal contradiction. On the one hand, the astounding advances of science have been made possible by abstract thinking, after it succeeded in breaking away from the shackles of paganism, but at the very same time, the culture has enslaved itself to sensuality. Indeed, one of our culture’s chief characteristics is the development of visual media, such as photography, film and television. This last one, in particular, fills much of modern man’s free time, even if he is a scientist and an intellectual. Visual appearance molds the perspective and ideas of man. One example is that modern man gives up his rational, free choice to advertising, which chooses for him what is good. In reality, this is a form of brainwashing which succeeds in large measure because it appeals to the visual senses and not to the intellect. To a great extent, we can place the blame for much of the spread of permissiveness in today’s world upon the visual media. Here too, Western culture lives with an inner contradiction with regard to feminism, seeking to relate to women rationally, as subjects equal to men, but at the same time granting freedom to urges that turn women into objects, a technique widely utilized by visual media. In all these examples there is tension between the intellect and the senses. There is a mighty struggle between them. There were those who argued against the Rambam’s statement, following Aristotle: “The sense of touch is a great embarrassment to us.” However, one cannot argue that the degree of debauchedness that Western culture has achieved is not a humiliation and an embarrassment!

Fundamentally, there are blessings in all the new technologies. It is appropriate to use them where necessary, but in an intelligent way, namely, to give pride of place to the intellect above the senses.

The Rambam does not insist that one accept his suggestions about the reasons for the commandments, but one who roots himself in these reasons lives on a very high spiritual plain. For instance, if a person is careful not to shave with a razor because of his knowledge of the Rambam’s explanation that this is prohibited because of its connection to idolatry in ancient times, he lives now in the 21st century, but still struggles with the influences of the paganism on modernity. This knowledge sharpens his awareness, so that he can rise above the powerful draw of the senses and strive for a purer spiritual plain. Can we compare the level of this person to the person who shaves just because he wishes to have a nice-looking face? Who is more advanced, more enlightened?

III. The Source of Inventions and Technology

True, modern man no longer worships the forces of nature so that they should protect him and grant him success, but their place has be taken by technology which is revered as the One and Only, if such a thing can even be uttered, capable of saving man from all his troubles When someone has a medical issue, even according to the Rambam he is obligated to turn to a doctor. When he has a problem with his air conditioner, he should turn to an electrician. These responses are rational and scientific, and therefore also appropriate. However, complete and utter reliance on man’s powers, that only he will provide the cure to our ills, and disregarding God, who watches over us, is a serious religious defect. As the Rambam says (Guide to the Perplexed 3:36): “And so too that which He commanded us to cry out to Him, may He be exalted, when there is trouble… that through this the correct belief is established: that He, may He be exalted, understands our circumstances and that it is in His hand to fix them if we listen, or to ruin them if we sin, and that we should not believe that this is an accident or a coincidence… and these are His words (Leviticus 26:27-28): ‘And if you walk with Me in happenstance…I will walk with you in the fury of happenstance.’ For their belief that this matter is an accident leads them to continue in their false beliefs and their wicked behaviors, and they will not repent from them.”

The source of all the capabilities and inventions and discoveries is in divine wisdom, which flows continuously upon the intellect of man. God is the One who bestows understanding upon us and He gives us the strength to accomplish. “If God does not build the house, the workers have labored in vain. If God does not watch the city, the guards have watched for naught” (Tehillim 127:1).

2021-06-04
Yaakov Ariel
Previous: Shelach: Second Aliyah
Next: Do You Need A Rabbi For A Wedding?