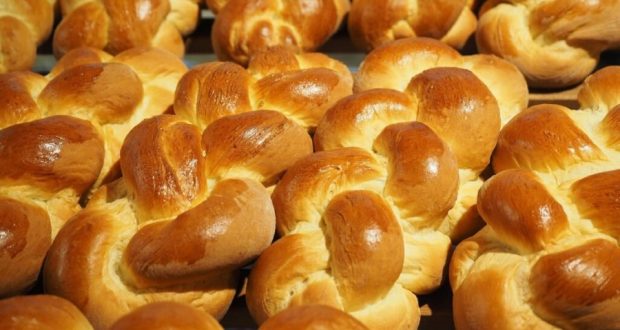 How Many Challot to Take Home?

Question: My neighbor works in a bakery, and when they have a lot of unsold challot, he often takes home dozens of them and encourages people at Maariv of Shabbat to come take as many as possible. I took what I thought I might use but not what I knew would go straight into the freezer because I thought it was hachana (preparation for after Shabbat). Is that correct?

Answer: Your reaction is understandable. After all, even taking something from one place to another can be hachana, as we see from the halacha not to bring wine on the first day of Yom Tov for Kiddush of the second day (Magen Avraham 667:3). The fact that the extra challa will be used for another Shabbat does not help because one may not prepare on one Shabbat for the needs of another one (Tehilla L’Dovid 302:6; see Shulchan Aruch, Orach Chayim 334:4).

However, there are several possible ways to justify leniency regarding the difficult to define prohibition of hachana. The Maharshag (OC 61) has a broad leniency that hachana does not apply when there is not a viable way of doing the same thing after Shabbat, which might apply here. However, there are many problems with this thesis, if taken broadly (see Kinyan Torah II:115).

In certain contexts, when an action is needed for Shabbat for a certain amount of objects, hachana does not forbid doing it to additional objects. One example is that one may wash multiple dishes even if he only needs one of them, because any one of them could be the one he decides to use (Mishna Berura 323:26). It is likely that similarly, you can bring home multiple challot, since any one of them can be the one you decide to use (there may be an indication of this in Orach Chayim 323:1).

There are other grounds for leniency, based on need. Apparently, your neighbor’s idea is to give out all the challot as soon as possible. If he is successful, then if you do not take them on Shabbat, you will lose your opportunity. Does that matter? One is allowed to move a non-muktzeh object from place to place in order to prevent it from being harmed (Shabbat 123b), and poskim explain that an action done to prevent loss is not defined as hachana (see Orchot Shabbat 22:176). It is not obvious that this applies here to your lost opportunity if the challot are not in danger but will just go to someone else. Also, you are not losing property, just not obtaining more, and in Halacha, not receiving profit often lacks the halachic weight of losing something one already has (see Magen Avraham 533:6 regarding Chol Hamo’ed).

However, in this context, it appears that the lost opportunity to receive something for free is enough to waive hachana. The Shulchan Aruch (OC 266:13) says that one may not pick up a wallet that he found in public on Shabbat, but the reason for that is muktzeh, and one may move it where he likes by kicking it (Be’ur Halacha ad loc.) In order to explain why this would not be forbidden due to hachana, we must apparently have to assume that it is due to the loss together with the fact that moving an object is not a serious action requiring toil (see analysis of Machzeh Eliyahu 58). In our case, the situation is in some ways more lenient than there, in that here it is not clear to the observer that the challot will not be eaten (see Chayei Adam II:153:6).

In the case that your neighbors will not take all of the challot, there is a different type of damaging situation that justifies action. That is that the challa may need to be discarded, which is a situation we try to avoid (see Living the Halachic Process VI, G-9). Alternatively, the well-intentioned bakery worker may have the inconvenience of having a bothersome amount of challa in his house, making helping him of immediate value.

While it is permitted to acquire food presents one might eat on Shabbat (Shulchan Aruch Harav, OC 306:15), it is a problem if he is planning not to eat it. Therefore, if there are loaves that you are confident you will not eat, you should have in mind not to acquire them until after Shabbat (see Shemirat Shabbat K’hilchata 29:29).