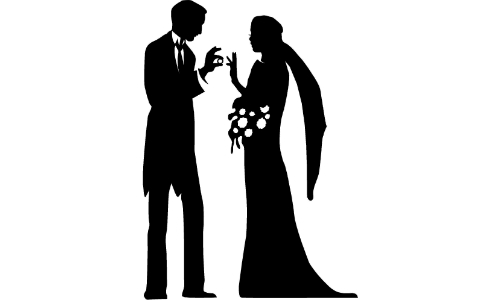 Do You Need A Rabbi For A Wedding?

I. What A Rabbi Does

Most of us have been to enough Jewish weddings that we know how they work. We can easily officiate. Even without a big crowd, all a man has to do is give a woman a ring in front of two witnesses and say the “harei at” formula. Who needs a rabbi? If you really want an officiant, have your friend, teacher or barber perform the ceremony. Maybe have a singer or a chazzan do it, instead of a rabbi. Looking through the responsa literature, we see that some people have done it that way with disastrous results.

You need a rabbi to officiate to ensure that the man and woman are permitted to marry and that the wedding is performed according to the necessary requirements. Rav Yosef Zechariah Stern (Zeikher Yehosef, Even Ha-Ezer 10) discusses a wedding at which a local teacher officiated without the knowledge of the town’s rabbi. Not only were the couple forbidden to marry, the ring was borrowed. When the teacher learned about the ring, he had the couple divorce and remarry. The rabbi asked Rav Stern whether the couple may remain together after the second wedding, since technically they should never have been allowed to marry. Throughout the centuries, the responsa literature records many similar questions in which inexpert officiants failed to ensure that the ring or witnesses met halakhic standards or were unaware that the couple may not be allowed to wed. This is why the Gemara (Kiddushin 6a) warns that anyone who does not fully understand marriages and divorces may not officiate at them. You need to be trained to perform a wedding.

Mischievous teenagers cause an additional problem of rabbi-less weddings. If a boy gives a girl anything of sufficient value and says “harei at…,” and she accepts, they need a divorce. To avoid this problem, communities have attempted to issue enactments that render such weddings invalid. Throughout the Middle Ages, we see mentions of local excommunications (cherem) issued on anyone who marries a woman (kiddushin) without a minyan, a formal officiant or otherwise planned and controlled (eg Responsa Rashba 1:550; Ritva quoted in Beis Yosef, Even Ha-Ezer 45 sv. ve-khasav od; Responsa Rashbatz 1:133; Responsa Maharik 83-84). These enactments and excommunications can serve to deter people from marrying in this fashion and punish those who do so. The question is whether these enactments can invalidate a wedding, thereby avoiding the need for a get which can be very difficult and costly.

We see three views on this matter in the 16th century. Rav Eliyahu Mizrachi (Responsa, no. 17) points out that a wedding of two people rabbinically forbidden can be effective, even if prohibited. If so, how can a wedding prohibited only by a cherem be less effective than one rabbinically forbidden? He does not allow for the invalidation of these marriages. However, his argument assumes that the cherem merely forbids the marriage. The rabbinic genius can find other ways to invalidate the marriage.

Rav Moshe (Maharam) Alashkar (Responsa, no. 48) discusses enactments that not only forbid the marriage but explicitly remove ownership of the ring (or other item) used to effect the marriage. Since the groom must own the ring and rabbis (even today) have the ability to render property ownerless, they can prevent the marriage from taking effect by declaring in advance that the ring is ownerless under specific circumstances. However, Maharam Alashkar cautions that a single community inside a large city cannot make this enactment on its own. Otherwise, a couple can just go down the street and have their marriage recognized. Only the joint communities of a city or region can invalidate marriages in this way.

Rav Shmuel De Medina (Maharshdam; Responsa, Even Ha-Ezer 12, 21, 30) discusses a different type of cherem. Communities can excommunicate people who witness a wedding that lacks a rabbi or minyan. Since a wedding needs two witnesses, by excommunicating the witnesses the rabbis effectively nullify the wedding. This was challenged by the Maharshakh, whose case was taken up by the Ketzos Ha-Choshen (52:1). Witnesses are only invalidated after the fact, for future weddings. Additionally, people can witness a wedding by accident, if they happen to be where it takes place. In such a case, they do not violate the cherem and remain qualified to testify.

In practice, the Rema (Shulchan Arukh, Even Ha-Ezer 28:21) rules that even if a community issues an enactment against marriages without a minyan or the like, in such situations we require a get out of doubt. Where there is no enactment to the contrary, the Taz (Even Ha-Ezer 49:1) allows anyone to officiate at a wedding as long as he does not rule on anything. I assume that means that a rabbi has to approve the marriage in advance and the officiant needs at least basic training to avoid problems. Indeed, many communities issued an enactment that the rabbi had to approve the marriage but did not have to officiate at the wedding. This is so despite the reality that some communities failed to pay their rabbi a living wage and assumed that he would supplement his income with fees for life cycle events. However, the Pischei Teshuvah (ad loc., 2) quotes Rav Ya’akov Reischer (Shevus Ya’akov 3:116) who rules that a wedding officiant must be fully proficient in all the laws to avoid problems.

Rav Moshe Sofer (Responsa Chasam Sofer, Even Ha-Ezer 108-109) adds an important footnote to the above discussion. The annulment under debate only refers to the first stage of marriage, the kiddushin. Since reckless teenagers would only do the kiddushin, these enactments could prevent such problems. However, no cherem can undo a marriage that has been consummated.