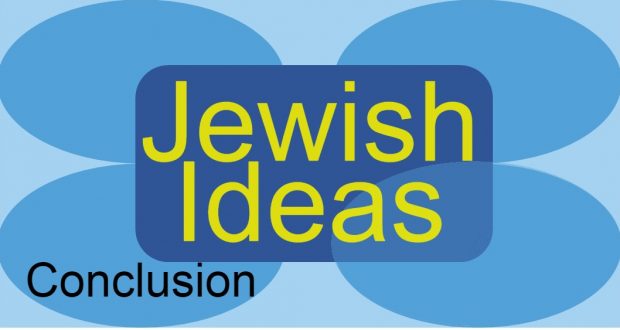 Conclusion to Symposium on Jewish Ideas

Over the past twenty years, voices emerging from and associated with the movement that calls itself “Open Orthodoxy” have attempted to change Jewish practices and beliefs to be more consistent with contemporary secular practices and beliefs. Many leaders have responded by denying the merit of these attempts. While correct, these responses deserve more depth and breadth, explaining why these proposals are wrong. The Torah Musings Symposium on Jewish Ideas clarifies the nature and sources of Jewish belief, thereby providing the backup needed to respond to proposals for change.

Prior Torah Musings symposia have discussed Open Orthodoxy in general and the Masorah (tradition) that prevents Orthodox Judaism from going down the path of radical change. The symposium on Jewish Ideas picks up where those two symposia left off and addresses the limits of Jewish beliefs, two core beliefs under attack, namely the Torah’s text and traditional family structure.

I opened the symposium with an examination of the obligation to remain committed to traditional beliefs and practices. The Torah is eternal. When we encounter cultural or intellectual challenges to the Torah, we must take them seriously but dare not change the Torah to fit our understanding. Some who have  emerged from the Open Orthodox community have gone in the other direction, advocating changes to traditional beliefs and practices. For example, Rabbi Dr. Zev Farber argues that Jews must reject the divine authorship of the Torah because of the claims of biblical criticism. Rabbi Avram Mlotek has officiated at gay marriages rather than accept the Torah’s limitations on relationships. Orthodox thinkers dare not ignore these challenges posed by contemporary thought. Western culture is so strong that resistance to it requires constant reinforcement. If we do not protest these capitulations of Jewish thought and practice to the dominant culture, they will become acceptable in Orthodox society.

Rabbi Netanel Wiederblank, the author of a series of comprehensive books on Jewish thought, addresses the attempts to expand Jewish belief beyond traditional bounds. He explores the question “what if I don’t believe?”, particularly in the modern world, and distinguishes between those who are truly blameless for their disbelief and those who fail to utilize available resources.

There are good reasons to believe in the tenets of Jewish faith. Those people who fail to put in the effort to understand and appreciate Jewish beliefs are religiously negligent. From time eternal, people have puzzled over basic questions of life in this world, such as: What is our purpose? Why do bad things happen to good people? The answers require deep thought and extensive study, which most people are not willing to undertake. Those who do engage in this difficult course of study will find it rewarding on multiple levels.

Rabbi Dr. Yitzhak Berger discusses the topic of biblical criticism, which some people find particularly vexing. The challenges that biblical criticism pose to traditional Jewish faith yield different reactions in different people. Most of the time, someone living a happy, intellectually fulfilled Jewish life will not find the academic claims particularly threatening to their religious commitments. For others, Berger offers some approaches to resolve the various challenges. For example, there are some narratives in the Bible that, even from a traditional perspective, may not need to be taken literally, whether in total (Jonah and the big fish, according to one conception of the position of the Vilna Gaon) or in part. While taking this approach beyond a certain point becomes religiously questionable, in moderation it can resolve many difficulties.

As for apparent contradictions and repetitions, these can often be resolved when considered from a literary perspective: frequently, we can identify literary purpose in such apparent incongruities.  It is also important to set aside our cultural assumptions about how a text should flow. What seems strange or difficult to a modern reader might have seemed normal to the original readers of the text three thousand years ago. These are some of the many tools available to the traditional believer when approaching the Bible in light of the claims of academic biblical criticism. These tools have expanded recently—and may continue to expand—as a new generation of Bible scholars attends to the relevant issues.

Rabbi Rafi Eis examines gay marriage in light of Jewish tradition. The mistake of religious progressives who advocate for changing Judaism in this respect is that they take their values from secular culture, not from Torah. Secular culture views marriage as a tool for self-fulfillment. The Torah sees family as an avenue for raising and educating the next generation, and ultimately building civilization. Marriage protects children, strengthening and sanctifying the intimate parental bond. A Jewish home, a family with a mother and father, is the primary stage for raising children. Ultimately, marriage is about giving to others, not fulfilling yourself.

Judaism emphasizes that a family needs a mother and a father, and that children deserve both types of parental figures. Tragically, not every child has both, a result of death or abandonment. It is the community’s job to offer assistance and guidance in such situations, not to increase the problem by sanctioning the creation of more families without both a mother and a father. These simple truths emerge from the sacred texts of the Bible, Talmud and Midrash. Today, more than ever, they must be taught and emphasized in order to fight against the tide of secular values.

We live in a time of rapid moral change. What was considered unacceptable a decade ago has become acceptable, and vice versa. The seeming certainty of secular morality is an obvious illusion when seen through a historical perspective. In contrast, Torah constitutes eternal truth. When the outside culture contradicts Torah values, we must stand firm in our traditional convictions and wait for society to inevitably change its mind. This symposium on Jewish Ideas reminds us of the profound depth and consistency of Torah values to which we cling as a life raft in the rough seas of contemporary morality.

Rabbi Gil Student is the founder, publisher and editor-in-chief of Torah Musings.

A printable PDF of this symposium will be available Thursday, April 22, 9:30pm EDT