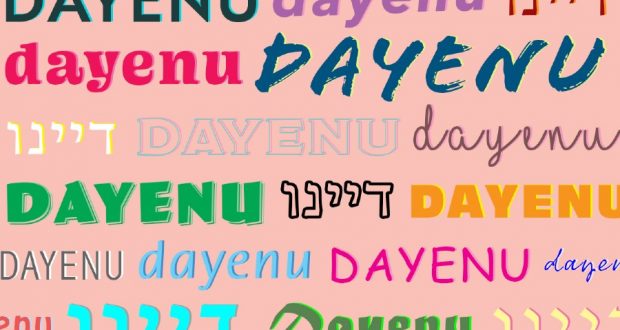 There must be a different reason for the commandment of Shabbos. The Torah (Ex. 31:17) says about Shabbos, “It is a sign between Me and the children of Israel forever.” Shabbos distinguishes Jews from gentiles. We rest of on Shabbos and they do not. In this vein, among the five divine distinctions we list in Havdalah at the conclusion of Shabbos is the difference between Jews and gentiles. This difference can be seen through Shabbos.

However, at Mt. Sinai, God made a special covenant with the Jews that He would not switch them with another people. For this reason, the Gemara (Shabbos 89a) says that the mountain is named Sinai because it caused hatred among the gentiles for Jews. The chosenness of Jews angers many gentiles. But if Shabbos creates the distinction between Jews and gentiles, of what purpose was Mt. Sinai?

This is the meaning of: If He had given us the Shabbos, and not brought us to Mt. Sinai; Dayenu (it would have been enough for us).

The Zohar (Parashas Bereishis) says that Adam’s sin was not fully rectified until the revelation at Mt. Sinai. However, Adam repented from his sin. Shouldn’t the repentance serve to rectify his sin? There is a debate between the Zohar and Midrash Rabbah whether repentance works for the sin of idolatry. This passage must follow the view that repentance does not work for idolatry and therefore Adam’s rebellion against God was not rectified until the revelation at Mt. Sinai.

However, the Gemara (Shabbos 87a) asks what justified Moshe’s destruction of the first tablets. The Gemara explains that Moshe used the kal va-chomer logic. If an apostate Jew cannot partake in the Pesach sacrifice, which is only one mitzvah, then certainly (kal va-chomer) the Jews who were apostates for worshipping the Golden Calf could not receive the entire Torah. Tosafos (ad loc., s.v. u-mah Pesach) points out that the kal va-chomer does not fully justify the breaking of the tablets. Moshe could have delayed the giving of the tablets and taught them Torah to bring the nation to repentance.

If repentance works for idolatry, then the Jews could have received the Torah. But then there is no need for the revelation at Mt. Sinai to rectify Adam’s sin for which he repented. On the other hand, if repentance does not work for idolatry, then the revelation at Mt. Sinai was necessary to rectify Adam’s sin. But then why did the Jews receive the Torah?

This is the meaning of: If He had brought us to Mt. Sinai, and had not given us the Torah; Dayenu (it would have been enough for us).

Pa’anei’ach Raza (I could not find this) answers Tosafos’ question that the tribe of Levi did not worship the Golden Calf. Therefore, the Jewish people at the time of the revelation at Mt. Sinai were like a group of circumcised and uncircumcised Jews (mulim ve-areilim). Rav Chisda holds that if part of the group is uncircumcised then the Pesach sacrifice is invalid. Rav Ashi holds that a Pesach sacrifice for a mixed group of circumcised and uncircumcised is valid (Pesachim 61b). According to Rav Ashi, Moshe should have given the Torah to Israel because the tribe of Levi did not commit idolatry and therefore it was a mixed group of idolators and non-idolators.

If we follow Rav Chisda, the Jews merited entering the land of Israel from the Pesach sacrifice brought in the final year in the desert. But according to Rav Chisda, if some Jews committed idolatry and some did not, they could not receive the Torah.

If we follow Rav Ashi, and the Jews received the Torah because some (Levi) did not worship idolatry, then we follow the view that the Pesach sacrifice is not obligatory until the Jews conquered the land of Israel. Otherwise they should have brought it in the desert. If so, why did they merit entering the land?

This is the meaning of: If He had given us the Torah, and had not brought us to the land of Israel; Dayenu (it would have been enough for us).

If we do not listen to a prophet to violate a law, then we understand why God had to build the Holy Temple. David could not follow Gad’s guidance to build the Temple on a mountain that contained idolatry. But if so, how could the Jews have brought the Pesach sacrifice in the time of Yehoshua and merited entering the land?

If we listen to a prophet to violate a law, then we understand how the Jews brought the Pesach sacrifice and merited entering the land of Israel. But then why did God have to build the Holy Temple?

This is the meaning of: If He had brought us to the land of Israel, and had not built for us the Holy Temple; Dayenu (it would have been enough for us).

Tosafos (Kiddushin 31b s.v. istaya) say that God placed much of the punishment that the Jews deserved on the Temple instead. This can be explained with the concept of collateral (mashkon). The Temple was placed as collateral for our obligations and when we failed to fulfill those obligations, the collateral was taken away. That is why the Tabernacle is called a mishkan, similar to mashkon. And the Temple is also called a mishkan (Shevu’os 16b).

The general rule is that a lender cannot take collateral after the time of the loan. Meaning, if he lends money and then as the loan progresses, he gets nervous and wants collateral. He must go to a court and have the court take the collateral (Bava Metzi’a 113a). An exception to this rule is if the collateral belongs to the lender. Then he can take it on his own from the borrower.

This is the meaning of: And built for us the Temple, to atone for all our sins.

May we say Dayenu together next year in a rebuilt Jerusalem!