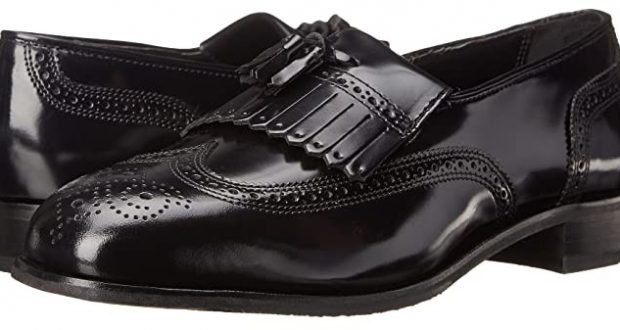 We greet Shabbos and spend the entire day clean and proper, dressed in fine clothes. Do we also need to wear fine shoes that we have designated for Shabbos? The Gemara (Shabbos 119a) says that R. Chanina and R. Yannai would wear special clothes to greet Shabbos. The Gemara (Shabbos 113b) quotes Naomi’s instruction to Rus: “And you shall bathe, and anoint yourself, and put on your dress” (Ruth 3:3). R. Eliezer explains that Naomi told Rus to wear her Shabbos clothes.

Based on the above, Shulchan Arukh (Orach Chaim 262:2) rules that you should strive to have special, nice clothes set aside for Shabbos. If not, you should at least make your regular clothes look nice. Should we also have Shabbos shoes? For some people, the cost of an extra pair of shoes for a large family is within reach but difficult. Is there a need to spend that much money on Shabbos shoes or can people make do with one pair of shoes and allocate the money differently? This all boils down to whether shoes are considered clothing.

Rav Ephraim Hacohen, a 17th century rabbinic judge in Vilna (whose grandson was the author of Chakham Tzvi), was asked about someone who committed to pay for his friend’s clothing (Sha’ar Ephraim, no. 124). The friend assumed that this includes shoes while the man who made the promise refused to pay for shoes. Rav Hacohen rules that clothing does not include shoes. He brings proof from the Mishnah (Sanhedrin 60b) that lists different forms of worshipping an idol that are forbidden but are not punished either execution. These include: “one who hugs (an idol), kisses it, cleans it, sprays water before it, washes it, rubs it with oil, puts clothes on it (malbish, or puts shoes on it (manil).” From the fact that the Mishnah distinguishes between putting clothes on an idol and putting shoes on it, Rav Hacohen deduces that shoes are not considered clothing. Although he admits that this proof is not irrefutable.

Rav Ya’akov Reischer (18th cen., Germany; Shevus Ya’akov 1:24) quotes other texts that distinguish between clothing and shoes. For example, “And they clothed them, and gave them shoes, and fed them, and gave them drink” (2 Chronicles 28:15). Similarly, “Your clothes did not wear out on you and the shoes on your feet did not become tattered” (Deut. 29:4). However, he disagrees with this entire line of argument. He explains that shoes are a type of clothing. They might be singled out for emphasis but they remain an item of clothing. The Mishnah includes putting shoes on an idol separately because putting only shoes on an idol, without putting any other clothes on it, is enough to violate the prohibition. Similarly, the Gemara (Eruvin 4a) says that: “One who enters a leprous house, and his clothes are draped over his shoulders, and his sandals and his rings are in his hands, he and they, immediately become ritually impure.” Rashi (ad loc., s.v. keilav) explains that these are all items of clothing but he is not wearing them normally so they also become impure.

In the addenda at the beginning of volume two of Shevus Ya’akov (no. 24), Rav Reischer points out that we sometimes see language of feeding and offering drink. The above-quoted verse in 2 Chronicles uses such language, as does the Gemara (Kiddushin 31b) about the obligations a child has to a parent. Just like drink is a subset of food, so too shoes are a subset of clothing (see the variant text in the Ein Ya’akov, ad loc.). Based on the above, Rav Reischer disagrees with Rav Hacohen and rules that someone who committed to pay for his friend’s clothing must also pay for his shoes. (Rav Chaim Yosef David Azulai, Chaim Sha’al 1:76 s.v. ve-da, reaches the same conclusion.)

Based on what we have seen so far, it would seem that Rav Reischer would require you to have special Shabbos shoes, if possible, and Rav Hacohen would consider them unnecessary.

Rav Yosef Chaim of Baghdad (20th cen.; Rav Pe’alim, vol. 4, Orach Chaim, no. 13) addresses this question directly and does not quote the responsa above. Rather, he focuses on the blessings we recite in the morning. We recite on blessing on clothing (“malbish arumim, who clothes the naked”) and another on shoes (“she-asah li kol tzorki, who has provided me with all I need). The latter blessing was instituted regarding shoes (Berakhos 60b). Since we have separate blessings, shoes must not be considered an article of clothing and therefore is not covered by the blessing on clothes. Rav Yosef Chaim also quotes the Talmud Yerushalmi (Shabbos 6:2) which says explicitly that it is not normal practice to have separate shoes for the weekday and for Shabbos. Therefore, Rav Yosef Chaim rules that you do not need special Shabbos shoes. (Rav Yosef Rosen, known as The Rogatchover Gaon, in a letter in the back of Ketzos Ha-Shulchan, vol. 4, seems to assume likewise.)

Rav Shlom Zalman Braun (20th cen., US; She’arim Metzuyanim Ba-Halakhah 72:37) quotes Rav Ya’akov Moelin (Maharil, 15th cen., Germany), cited in Ba’er Heitev (529:4). Shulchan Arukh (Orach Chaim 529:1) says that your Yom Tov clothes should be nicer than your Shabbos clothes. Ba’er Heitev adds in the name of Maharil that if you cannot afford special Yom Tov clothes, you should buy nicer shoes for the holiday. Rav Braun infers from this language that shoes are not considered clothing. Normally you do not need special shoes for Shabbos or Yom Tov but if you cannot afford special clothes, you should buy special shoes.

Rav Shmuel Kamenetsky (cont., US; Kovetz Halakhos, Shabbos, vol. 1 1:32) rules that you should have special Shabbos shoes. Effectively, he follows Rav Reischer and not Rav Hacohen, Rav Yosef Chaim or Rav Braun. Rav Moshe Isserles (16th cen., Poland; Shulchan Arukh, Choshen Mishpat 248:11) writes that someone dying (shekhiv me-ra) who says that he gives all his clothes to a certain person, that person acquires anything called clothing, whether for the weekday or for Shabbos. Rav Akiva Eiger (19th cen., Poland; Glosses, ad loc.) quotes Rav Reischer’s above responsum and says that the dying person’s shoes also go to the recipient because shoes are considered clothing. Rav Daniel Kleinman, the editor of Rav Kamenetsky’s Kovetz Halakhos series, cites this ruling of Rav Akiva Eiger as a precedent for Rav Kamenetsky’s ruling (ad loc., n. 56). Rav Kleinman points out that Rav Yosef Chaim reads the Yerushalmi like the Korban Ha-Edah commentary. However, the Pnei Moshe commentary explains the Yerushalmi as meaning that it is customary to have special shoes for Shabbos. Rav Kleinman also questions Rav Yosef Chaim’s argument from the morning blessings since there is also a separate blessing on a hat (“oter Yisrael be-sifarah, who crowns Israel with glory,” Berakhos 60b). The separate blessing does not indicate that shoes are not an item of clothing.

Rav Betzalel Zev Shafran (20th cen., Ukraine; Responsa Ha-Rabaz, vol. 1 no. 12) quotes the Mishnah (Kesubos 64b) about a man who travels for business and leaves a third party as a trustee to providing for his wife. The man’s assets must be used to pay for many things, including a new pair of shoes every holiday (the Gemara qualifies that based on location and need). Rav Shafran notes that she gets only one pair of shoes, not two — one for weekday and one for Shabbos. Even if we would challenge this and say she uses her Shabbos shoes less frequently and needs a new pair only once a year, that isn’t mentioned at all. Apparently, Rav Shafran concludes, there is no need for special Shabbos shoes.

Rav Ovadiah Yosef (Yechaveh Da’as 5:23 – I thank R. Jeffrey Saks for bringing this responsum to my attention) suggests that even if you accept that you need special shoes for Shabbos, polishing your weekday shoes suffices. When you polish your shoes before Shabbos, you make them as-if new or at least as-if a different pair of shoes.