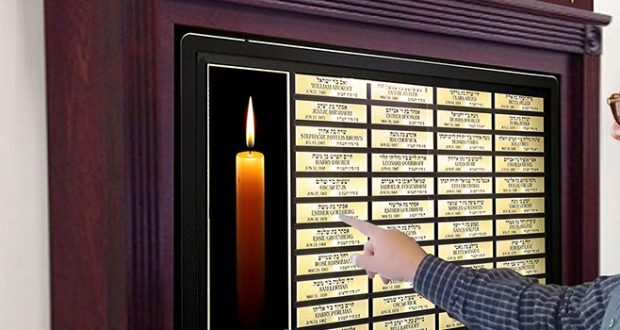 When I was young, it was common for synagogues to have large boards with plaques containing the names of the deceased and small light bulbs that were turned on for the week or month of the person’s yahrtzeit, the anniversary of his passing. They still exist today, although they are becoming less common. Many synagogues have removed the boards, some placing those names on a rotating basis on a digital screen. What is the significance of the yahrtzeit boards and do the digital displays offer equal merit?

I. A Custom or a Mitzvah?

There is an old custom to light a candle on a parent’s yahrtzeit. Rav Avraham Shmuel Binyamin Sofer (19th cen., Hungary; Responsa Kesav Sofer, Orach Chaim, no. 65) explains this practice as a sign of respect for parents, based on the verse, “The soul of a man is G-d’s lamp” (Prov. 20:27). In some way, lighting the candle serves to atone for the parent’s sins, similar to lighting a yahrtzeit candle before Yom Kippur (Shulchan Arukh, Orach Chaim 610:4).

Most historical discussions of the yahrtzeit candle say that the practice is to light it in a synagogue or study hall. In this way, the candle enables people to pray and study Torah. Rav Sofer discusses lighting in a home or in a synagogue. On Yom Tov, he permits both but prefers the synagogue because there is always a mitzvah to light candles in the synagogue. It seems from his discussion that the custom includes the possibility of lighting a yahrtzeit candle at home. Rav Aaron Levine (cont., Canada; Kol Bo Le-Yahrtzeit, vol. 1, p. 312 n. 235) says that the most common practice today is to light a yahrtzeit candle at home, although he quotes Rav Moshe Sternbuch (cont., Israel) as telling him personally that it is best to light in synagogue but you can light at home if you want.

In the mid-twentieth century, the question arose whether an electric light can be used as a yahrtzeit candle (for our purposes, we will discuss only an undesired incandescent lightbulb). In the first volume of Rav Betzalel Zev Shafran’s Responsa Ha-Rabaz (20th cen., Ukraine; no. 132), originally published in 1930, the author’s son, Rav Chanokh Henikh Shafran, addresses this question. Rav Shafran quotes a responsum from Rav Yitzchak Isaac Shmelkes (19th cen., Ukraine; Beis Yitzchak, Yoreh De’ah 120:5) regarding using a gas or electric light for Shabbos candle. Rav Shmelkes says that the filament or gas flame serve as proper flames for Shabbos lights but not for Chanukah lights. Rav Shafran argues that if an electric light suffices for Shabbos lights, even moreso it can be used as a yahrtzeit light. However, he adds that based on Kabbalah, it is best to light an oil lamp because oil represents the heavenly influence on a soul.

Rav Shafran quotes the Gemara (Kesubos 103a) that when Rav Yehudah Ha-Nasi’s death approached, he asked his family that a candle be lit in his normal place. This teaches that a Jewish soul will shine forever. Rav Bentzion Meir Chai Uziel (20th cen., Israel; Mishpetei Uziel, vol. 3 no. 23) disagrees with this interpretation of Rav Yehudah Ha-Nasi’s candle. He explains that this was a Shabbos candle, lit in Rav Yehudah Ha-Nasi’s regular place so his soul could visit every Shabbos.

Rav Uziel adds that the Sephardic custom is not to light a separate candle for the yahrtzeit but to add to the light in the synagogue. Any way you add light, whether through oil, wax, gas or electric, fulfills this custom. However, while he believes this is technically correct, he says that we should not deviate from the practice of our ancestors who used oil and wax for this light. It is a form of continuity in this practice for which continuing in our ancestors’ ways is most appropriate.

Rav Ovadiah Yosef (21st cen., Israel; Yechaveh Da’as, vol. 5 no. 60) disagrees with Rav Shafran’s kabbalistic preference for an oil lamp. Rav Yosef quotes Rav Chaim Yosef David Azulai (18th cen., Israel; Chaim Sha’al, vol. 2 no. 10 par. 3) who says that we only follow kabbalistic practices of the Arizal, and not those suggested by other kabbalists. For this reason, Rav Azulai said to stop the practice of blowing shofar on Rosh Hashanah at dawn, before praying, as suggested by an eminent kabbalist. Similarly, argues Rav Yosef, we need not be concerned with a kabbalistic argument in favor of oil or wax yahrtzeit candle over gas or electric because it does not originate from the Arizal.

Rav Yosef also quotes Rav David Tzvi Hoffmann (20th cen., Germany; Melamed Le-Ho’il, vol. 1 no. 22) who was asked whether you can light a kerosene lamp for a yahrtzeit. He quotes his mentor, Rav Moshe (Maharam) Schick (19th cen., Hungary; Responsa, Orach Chaim, no. 83) who rules that you may use a kerosene light for a synagogue’s eternal lamp. Similarly, argues Rav Hoffmann, you may use a kerosene lamp for a yahrtzeit candle. Rav Yosef points to the lack of preference for oil and extends this to permit an electric light for yahrtzeit candle. Although he recommends instead donating money to pay for the light in a study hall so the Torah learning will serve as merit for the deceased’s soul.

It would seem that the old practice of yahrtzeit boards fulfilled the custom of a yahrtzeit candle by adding light to the synagogue (although most people light a candle at home anyway). When the lightbulb next to the person’s plaque is turned in for his yahrtzeit, the synagogue has more light in the deceased’s memory. However, the digital sign often does not add any light for the yahrtzeits and merely alternates between different synagogues messages. Additionally, the digital displays are not made of incandescent lightbulbs that constitute flames but other technologies that do not qualify as candles. Therefore, I suggest, it does not fulfill the custom. In order to retain the merit of yahrtzeit candle, those synagogues that convert yahrtzeit boards to digital displays might consider formally stating that the synagogue’s electricity and lights are dedicated (at least partially) in memory of those whose yahrtzeits are observed in that week or month.