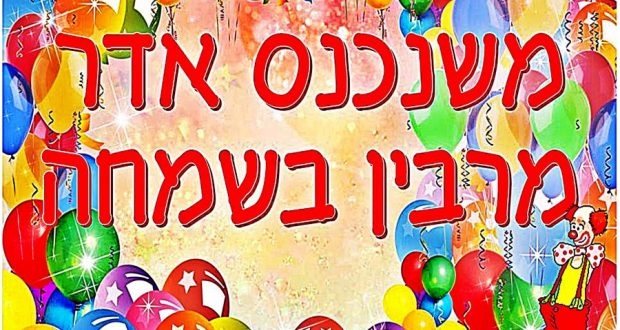 Is There a Mitzvah to Rejoice in Adar?

The Gemara (Ta’anis 29a) famously says that when Adar begins, we increase joy. While this saying is often quoted, standard codes omit it. Rambam (12th cen., Egypt) does not mention it in Mishneh Torah nor do Rav Yosef Karo (16th cen., Israel) and Rav Moshe Isserles (16th cen., Poland) in Shulchan Arukh. It is only Rav Avraham Gombiner (17th cen., Poland; Magen Avraham 686:5) who brings this idea into the codes, which then becomes standard (e.g. Chayei Adam 155:1; Kitzur Shulchan Arukh 141:1). Is it possible that there is no mitzvah to be happy in Adar?

One indication that there is no such mitzvah is that we say Tachanun prayers and the Tziduk Ha-Din formula throughout Adar, except on Purim and Shushan Purim (and Rosh Chodesh and Shabbos). We say it during Adar even though we usually omit Tachanun on joyous days. During the entire month of Nisan, we do not say Tachanun, but during most of Adar we do.

Making the matter more perplexing, the Gemara says: “Just like when (the month of) Av begins we decrease our joy, so too when (the month of) Adar begins we increase our joy.” Therefore, continues the Gemara, you should avoid a financial litigation with a gentile during Av and schedule it for Adar, because the mazal for Av is bad but for Adar is good. Rambam (Mishneh Torah, Hilkhos Ta’anis 5:6) says that we decrease joy in Av and Shulchan Arukh (Orach Chaim 551:1) adds the idea about not litigating during Av but neither mention these ideas regarding Adar. Why would they include the decreasing of joy in Av but not the increasing of joy in Adar?

Rav Moshe Sofer (19th cen., Hungary; Responsa Chasam Sofer, Orach Chaim 160) offers two possible explanations. There is a three-way debate regarding the length of the mourning during the month of Av: 1) from Rosh Chodesh until the fast, 2) the entire month, 3) only the week of the fast (Ta’anis 29b). Rav Sofer suggests that the above passage follows the middle view, that the mourning of Av lasts the whole month. Similarly, the joy of Adar begins with Rosh Chodesh. However, we follow the third view. Therefore, the above passage is rejected as well. Despite this, there is other reason to reduce our joyful activity at the beginning of Av. This is why Rambam and Shulchan Arukh mention decreasing joy at the beginning of Av but not increasing joy at the beginning of Adar.

Rav Chaim Elazar Shapiro (20th cen., Hungary; Nimukei Orach Chaim 696:1) finds both these explanations lacking. Primarily, if Ramban and Shulchan Arukh reject this Gemara because they believe it is contradicted by a more authoritative view in a different Gemara, why do they quote the rule about decreasing joy in Av? Rav Sofer cannot adequately explain that. Rather, he suggests that Rambam and Shulchan Arukh quote the rule about decreasing joy in Av because it manifests in specific practices. When there are concrete rules, they quote the idea of decreasing joy. However, the increase in joy during Adar is not reflected in specific practices but rather joy in the heart. Since there are no rules about the joy in Adar, these codes omit the idea.

However, as Rav Shapiro himself notes, this explanation is quite difficult. Many times, Rambam quotes ideas that are expressed in the heart without specific practices. For example, Rambam describes what the mitzvah of joy in Yom Tov is and is not: “we were not commanded to indulge in frivolity or foolishness, but rather in rejoicing that involves the service of the Creator of all existence” (Mishneh Torah, Hilkhos Yom Tov 6:20). Ultimately, I have not yet found a satisfying explanation for the omission of the rule regarding Adar in conjunction with includion of the rule regarding Av.

In practice, how do we fulfill this idea to increase joy during Adar? Rav Shlomo Zalman Auerbach (20th cen., Israel; Halikhos Shlomo, Mo’adim, vol. 1, p. 328 n. 36) is quoted as saying that the mitzvah is not to rejoice actively during Adar but to relax and reduce your anxieties. Rav Chaim Kanievsky (cont., Israel; Derekh Sichah, vol. 1, p. 188) is quoted as saying that the idea of increasing joy during Adar is not an obligation but merely advice. He adds that the proper way to fulfill this during Adar is by learning more Torah, which rejoices the heart. During Av, you learn the laws of mourning to decrease joy. (I saw the preceding two sources quoted by Rav Mordechai Tzion in his editorial notes to Rav Shlomo Aviner’s Piskei Shlomo, vol. 1, p. 287.)