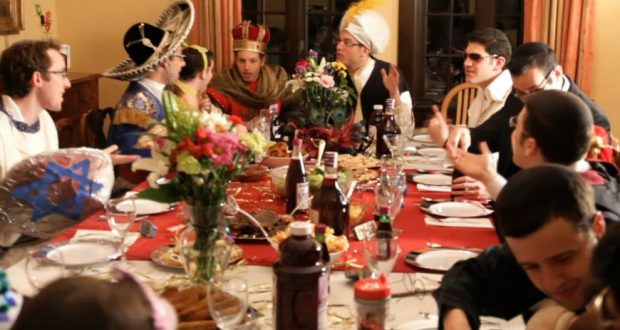 When Purim falls on Friday, Purim and Shabbat are at cross purposes. On the one hand, one is supposed to have a large and festive seudah in honor of Purim. On the other hand, this meal could potentially spoil one’s appetite for the evening’s Shabbat meal. How should one balance these two considerations?

Based on the Tosefta, it would appear that there is actually no issue in having a seudah on Friday. The Tosefta records that R. Yehuda forbids eating on Friday afternoon so as to ensure an appetite for the Friday night meal, whereas R. Yose allows eating until Shabbat begins (Berachot 5:1). Since the halacha is in accordance with R. Yose, one could seemingly eat the Purim repast at any point during the day.

We get a different impression, however, from a story found in the Gemara of a certain Jerusalemite family that was punished for scheduling a seudah on erev Shabbat (Gittin 38b).[1]Our discussion here is predicated on the assumption that “erev Shabbat” here means Friday, not the night of Shabbat (Rashi mentions both interpretations). But since R. Yose, whose opinion is normative, permits eating at any time on Friday, what precisely was this family doing wrong?

The Ramban explains that R. Yose’s permission to eat until Shabbat’s onset extends only to occasional need. Even R. Yose agrees one may not specifically schedule a meal to take place on Friday, as such would be a slap in the face to Shabbat. It is similarly possible to explain that R. Yose only permits small meals on Friday, whereas a large repast would be prohibited (Ritva quoting R. Chananel).

The Rambam apparently follows the latter approach, and forbids holding a banquet (seudah u-mishteh) at any point on Friday (Hilchot Shabbat 30:4). Although eating a regular meal is technically permissible, the Rambam recommends abstaining from any meal on Friday starting at mid-afternoon.[2]He uses the term ha-mincha, a reference to mincha ketana—2 ½ halachic hours before sunset. The Raavad (ad loc.) has a complete different approach: Any restrictions concerning eating on Friday apply after chatzot only.[3]The Raavad apparently holds that mincha refers to mincha gedola (half an hour after midday), rather than mincha ketana. The Raavad seems to permit any type of meal before midday on Friday. The exact … Continue reading

But what happens when a large seudah must occur on Friday specifically? Interestingly, the Rishonim and Shulchan Aruch do not offer explicit resolutions of this question. The Rema in his glosses, however, writes that it is a permissible to hold the meal celebrating a brit or pidyon ha-ben on Friday (Orach Chayim 249:2; see Bei’ur HaGra there for allusions to this in Chazal).[4]The halachic preference to serve meat and wine at a brit notwithstanding, many brit meals nowadays consist of light foods that are regular weekday fare. As such, their permissibility on Friday is not … Continue reading

Technically, then, a seudat mitzvah that is slated to occur on Friday supersedes the prohibition of holding a large meal on erev Shabbat. Nevertheless, it is prudent to hold the meal as early in the day as possible, so as to ensure that one’s appetite returns before Shabbat. Furthermore, one must make sure that plenty of time remains to prepare for Shabbat (cf. Rashba, Gittin 38b in the name of R. Chananel). These concerns are especially salient regarding the Purim meal, which is supposed to be particularly elaborate and include the consumption of larger-than-usual quantities of alcohol.[5]Regarding the degree to which one should become inebriated on Purim, see here.

Indeed, R. Isaac Tyrnau (15th century), the authoritative recorder of Eastern European practices, writes that when Purim falls on Friday, the seudah should take place in the morning (Hilchot Purim, quoted in Rema, Orach Chayim 695:2).[6]This ruling also accommodates the opinion of the Raavad. This is despite the fact that when Purim falls on a different day, the usual custom is to hold the seudah in the afternoon.[7]See here.

If one neglected to eat (or at least begin) the Purim meal before midday, one may (and must) still begin the seudah later in the day. However, one should certainly try to begin before half an hour prior to mincha ketana (see Responsa Maharil 58:8; Bach, Orach Chayim 249).

Some people, however, find it difficult to eat two large meals in one day no matter how far apart they are. Others find it stressful to have the cooking for the Purim seudah completed in the morning and then be required to prepare for Shabbat in the afternoon (perhaps while still not entirely sober).

To allay these concerns, some authorities have recommended beginning the Purim meal in the afternoon and combining the Purim and Friday night seudot into one (Meiri, Ketubot 7b; Nehar Mitzrayim, Hilchot Purim 13). In order to accomplish this, one employs the famous tactic of pores mappah u-mkaddesh (“one spreads out a cloth and recites Kiddush”).[8]Some have suggested an alternative idea: Make Kiddush and begin the meal immediately at plag ha-mincha (1 ¼ hours before sunset). Since one has accepted Shabbat but it is still the calendar day of … Continue reading

The concept of pores mappah u-mkaddesh is actually a compromise between two opinions cited in the Tosefta regarding what to do if one finds that Shabbat has begun whilst one is in engaged in a meal (Berachot 5:2). R. Yehuda maintains that one must stop eating and bench, then recite Kiddush and begin the meal anew in honor of Shabbat; R. Yose, in contrast, maintains that one may continue eating and recite Kiddush afterwards. Although the Tosefta indicates that the halacha follows R. Yose, the Gemara states that we do not follow his opinion in practice, but rather an intermediate approach: When Shabbat arrives, one covers the table (i.e., the food thereon), recites Kiddush, and then continues the meal (Pesachim 100a).

Since having a meal on Friday afternoon is normally discouraged, pores mappah u-mkaddesh is really a post facto remedy in the event one finds that one’s meal has extended into Shabbat (admittedly an odd situation, although one that was apparently more common in the times of Chazal). When Purim falls on Friday, however, there are grounds to employ pores mappah u-mkaddesh even lechatchila. After all, one is doing so in order to enhance the honor of Shabbat by ensuring that the Friday night meal (in this case, the second half of the combined Purim-Shabbat meal) will be eaten with an appetite. And one is also enhancing the honor of Purim by eating the seudah in a relaxed manner as opposed to rushing to have it in the morning.[9]One may similarly be inclined to do pores mappah u-mkaddesh when Yom Tov falls on Friday.

If one can do so without undue stress and gastronomic hardship, though, it is certainly preferable to have a separate Purim seudah in the morning. Doing so gives the Purim festivities their due distinction, and does not require one to take sides in the disagreements among the poskim as to how to properly execute pores mappah u-mkaddesh.[10]Tur, Orach Chayim 271 and Piskei Teshuvot 271 n. 159. The question is whether one repeats the blessings of borei pri ha-gafen and ha-motzi after spreading the cloth. See Piskei Teshuvot n. 161 for … Continue reading

Furthermore, one is supposed to recite al ha-nissim in the birkat ha-mazon of the Purim meal (although if one neglected to do so, one need not repeat benching). But in the case of pores mappah u-mkaddesh, it is questionable whether one may include al ha-nissim (at least in its official place during the second blessing of benching; one may certainly include it as part of the ha-rachaman prayers which follow the formal conclusion of birkat ha-mazon). Benching after the combined seudah also covers the part of the repast eaten on Shabbat; one must thus include retzei, the insertion for Shabbat. This potentially precludes the possibility of reciting the (less important) al ha-nissim, since reciting insertions for both Shabbat and Purim—two entirely different days—could be considered self-contradictory.[11]See Mishnah Berurah 695:15. The Meiri, however, writes that al ha-nissim may be recited since Shabbat (the 15th of Adar) is Shushan Purim. According to this, if one lives in a city walled since the … Continue reading

Additionally, one is exempt from praying Maariv as long as the meal continues (provided the seudah will conclude with enough time to daven in the proper timeframe).[12]According to the Arizal, it is always improper to recite Kiddush before davening Maariv (Kaf HaChaim 271:22,26). Thus, those who are kabbalistically inclined may want to avoid pores mappah u-mkaddesh. Thus, one will probably wind up davening Maariv after the meal without a minyan.[13]If there is a critical mass of people doing pores mappah u-mkaddesh, it is possible to schedule a minyan for after the meal. But in a small community, one’s absence at the regular Kabbalat Shabbat … Continue reading In theory, some of the party could attend services during the seudah so long as others remain at the place of the meal (Pesachim 102a). However, there are grounds to discourage this since taking a large break after the first part of the meal could lead to a loss of appetite for the portion of the seudah to be eaten on Shabbat, which entirely defeats the purpose (see Piskei Teshuvot 271 n. 160). Furthermore, many people will not be sober enough to daven during the course of the meal.

For those who have weighed their options and have honestly decided that a combined seudah will provide a superior religious and culinary experience, the procedure in practice is as follows:

In conclusion: When Purim falls on Friday, the ideal practice is to begin the Purim seudah in the morning (before chatzot), finishing as early as possible in order to allow time to prepare for Shabbat properly and regain one’s appetite. However, for those who truly find this difficult, there is room to allow beginning the Purim seudah in the afternoon and combining it with the Friday night meal, following the procedure outlined above.